'A duty of care': Australian teenagers take their climate crisis plea to court. Eight teenagers and an octogenarian nun head to an Australian court on Tuesday to launch what they hope will prove to be a landmark case – one that establishes the federal government’s duty of care in protecting future generations from a worsening climate crisis. 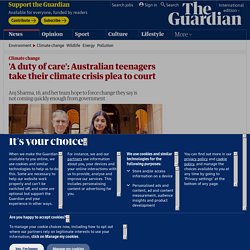 If successful, the people behind the class action believe it may set a precedent that stops the government approving new fossil fuel projects. China teaches children its own version of the climate change story. For most of her young life, 9-year-old Gao Ximan dreamed of becoming a policewoman. 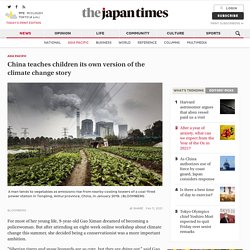 But after attending an eight-week online workshop about climate change this summer, she decided being a conservationist was a more important ambition. "Siberian tigers and snow leopards are so cute, but they are dying out,” said Gao, a fourth-grade student at one of the top public schools in Beijing. Biden says 'we've waited too long to deal with climate crisis' in sharp turn from Trump – live. Joe Biden is expected this Friday to issue executive orders on asylum at the US-Mexico border, refugee resettlement and the reunification of migrant families, according to a Biden transition team memo shared with lawmakers and interviews with two people familiar with the plans. 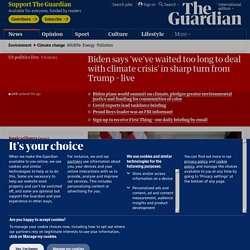 Biden has vowed to reverse many policies put in place by the former Republican president, Donald Trump, a process that could take months or years.The White House declined to comment and people familiar with discussions cautioned that plans could change, Reuters reports. Biden plans to rescind some Trump policies that made it harder to obtain asylum in the United States, according to the memo. Climate Health Network. Global trends in climate change litigation 2020 snapshot. Ecological Determinants Group on Education (EDGE) Mandate The Ecological Determinants Group on Education (EDGE) aims to bring together public health and allied professionals, researchers and educators with interest and expertise in the ecological determinants of health (EDH) to promote the integration of EDH with public health education, training, and professional development, attending to issues of content as well as issues of pedagogy (and the alignment between these). 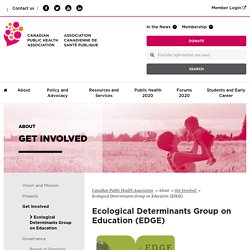 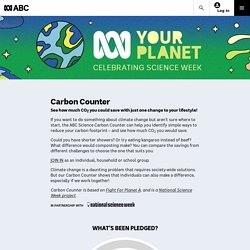 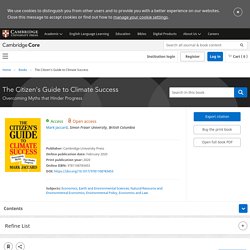 This is a potent, smart book that draws on Mark's decades of leadership on climate change, economics, and politics. A crucial read to learn what actions will effectively transform our world from climate crisis to a bright livable future.' Gregor Robertson - Mayor of Vancouver (2008–2018), and Global Ambassador for the Global Covenant of Mayors for Climate and Energy. How the climate fight could mimic the coronavirus fight. Human rights for the climate 'apocalypse' If you live on the east coast of Australia then you, like me, have probably been choking on smoke haze for weeks now. 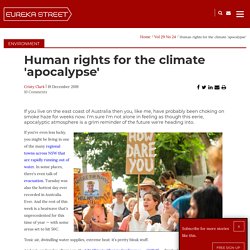 I'm sure I'm not alone in feeling as though this eerie, apocalyptic atmosphere is a grim reminder of the future we're heading into. If you're even less lucky, you might be living in one of the many regional towns across NSW that are rapidly running out of water. In some places, there's even talk of evacuation. Tuesday was also the hottest day ever recorded in Australia. Ever. Toxic air, dwindling water supplies, extreme heat: it's pretty bleak stuff. And yet, on Sunday afternoon, the UN Climate Change Conference — COP 25 — finished up with very little progress. AUSTRALIA DECLARES Shaping Australia’s Emergency Transition. A New Approach to Climate Action. Australia’s 2019-20 megafires are a harbinger of life and death on a hotter Earth. 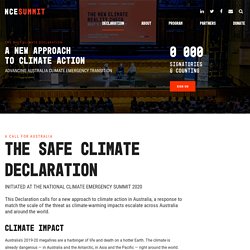 The climate is already dangerous — in Australia and the Antarctic, in Asia and the Pacific — right around the world. The Earth is unacceptably too hot now. The impacts of climate disruption are more severe than previously projected. At 1.5°C warming relative to pre-industrial levels, now likely only a decade away, the Great Barrier Reef will be lost, sea levels will be heading for a rise of many metres, and tipping points will be at hand for Greenland, and for the Amazon and other carbon stores. The current Paris Agreement emission reduction commitments, if implemented, are a path to 3.5°C warming by 2100, possibly earlier. Leading scientists warn of a “Hot House Earth” scenario, a planetary threshold that may exist at a temperature rise as low as 2°C, in which further warming becomes self-sustaining. Climate summit calls for urgent action after Australia's fire-hit summer.

The megafires of Australia’s summer “are a harbinger of life and death on a hotter Earth”, a climate summit has said in a forceful declaration for urgent and dramatic climate action. 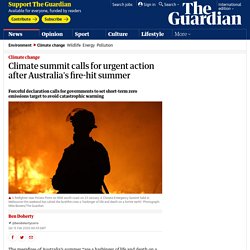 The Climate Emergency Summit, held in Melbourne this week and of which Guardian Australia was a partner, released a declaration saying the warming world was a clear threat to Australian society and civilisation. “The climate is already dangerous – in Australia and the Antarctic, in Asia and the Pacific – right around the world. The Earth is unacceptably too hot now,” the declaration said. “If the climate warms 1.5 degrees above pre-industrial levels, the Great Barrier Reef will likely be lost, sea levels could rise metres and massive global carbon stores such as the Amazon and Greenland, will hit tipping points, releasing millions of tonnes of carbon into the atmosphere.”

Signatories to the declaration included Ian Dunlop, Carmen Lawrence, John Hewson, Tim Costello and Kerryn Phelps. If there's a silver lining in the clouds of smoke it's that this could be a tipping point. As a climate scientist on sabbatical in Australia, I’ve had plenty of conversations about the climate crisis lately as bushfires have burned their way to the front of everyone’s mind. 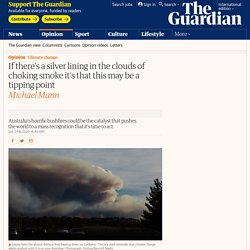 Although the Murdoch media make it seem as if there’s plenty of debate, the reality is that most Australians I talk to get it. And why shouldn’t they? More carbon pollution means warmer temperatures which dry out the landscape, making it easier for fires to spread. The fact that the bushfires tore through Australia as we ended the hottest decade ever recorded is no coincidence. But those opposed to climate action have tied themselves in knots trying to fool the public into believing that it’s really environmentalists and arsonists at fault.

Yet it’s hard to sell denial when people are busy fleeing the flames. That’s precisely what happened to Jeremy Wright, a Rotary Club member who came to a lecture I gave the other day at the University of New South Wales, in Sydney. Plan B 4.0 - Mobilizing to Save Civilization. "A great blueprint for combatting climate change. " 'Climate justice': Young Australian of the Year finalist makes bold statement. Young Australian of the Year finalist Madeline Diamond used the awards ceremony to make a political statement, painting "climate justice" on her body. The words were clearly visible as Ms Diamond, 22, stood on stage alongside other finalists for the announcement of the winner at the Canberra awards night. The 22-year-old won the ACT's nomination for promoting sustainability and said she wanted to make the most of the national platform. ACT's 2020 Young Australian of the Year finalist Madeline Diamond met the prime minister earlier on Saturday.

Why we're rethinking the images we use for our climate journalism. At the Guardian we want to ensure that the images we publish accurately and appropriately convey the climate crisis that we face. Following discussions among editors about how we could change the language we use in our coverage of environmental issues, our attention then turned to images. We have been working across the organisation to better understand how we aim to visually communicate the impact the climate emergency is having across the world. Our goal is to provide guidelines for anyone working with images at the Guardian. We are also asking the agencies and photographers we work with to provide images that are appropriate to the changing narrative. The catastrophic bushfire season is an opportunity for leadership — if only someone would seize it. Analysis Updated Sat at 5:34amSat 16 Nov 2019, 5:34am It has been a week of catastrophe in Australia.

For so many people, and so many communities, there have been days and nights of sleeplessness, exhausting anxiety, and fear of monstrous firestorms; and for some, the destruction they have caused. And now the oppressive knowledge that it is likely that this could go on for months. It has also been a week of catastrophic failure of our political dialogue. Greta Thunberg Glares At Donald Trump As He Arrives At UN Climate Summit. Morrison warns against 'needless anxiety' after Thunberg climate speech. Ms Thunberg told the UN gathering her generation "will never forgive you" if today's leaders do not scale back carbon emissions and prevent catastrophic increases in temperature.

Related Article "I should be back in school on the other side of the ocean," she said. "Yet you all come to us young people for hope. How dare you. You have stolen my dreams and my childhood with your empty words. " Asked about her remarks, Mr Morrison said children should remember that Australia and others had rebuilt after existential threats in the past, citing the way the United Nations was created after World War II. "Yes, we've got to deal with the policy issues and we've got to take it seriously, but I don't want our children having anxieties about these issues," he said.

Greta Thunberg, the Fifteen-Year-Old Climate Activist Who Is Demanding a New Kind of Politics. Students worldwide walk out of school to push for action on climate change. We’re living in a double reality, and our kids can see through it. These Photos Of Students Protesting Climate Inaction Are Powerful. School Strike. Page from Environmental Challenges: Justice in Natural Resource Management - University of Leeds. How climate change and regional water made the environment a NSW election issue. Publisher stands by school textbook calling Tony Abbott a 'climate change denier' "We've entered a new era" of climate concern, survey finds.

Eco - shout. The Ugly Indian. Photos: Naked PETA Activists' Pro-Vegan Demonstration Interrupted by Police. Climate Camp protests target RBS and Shell in Central London. GetUp! - Help stop Adani from destroying the Great Barrier Reef. Run for your lives, climate campaigners are sophisticated and can tie their own shoelaces. Never Before Have I Laughed So Hard At One Guy's Non-Attempt To Save The Planet. Don't wait for global politics to fix climate change – we can do it ourselves. Thank You - Healthy Futures. How social enterprise Thankyou is fighting global poverty.