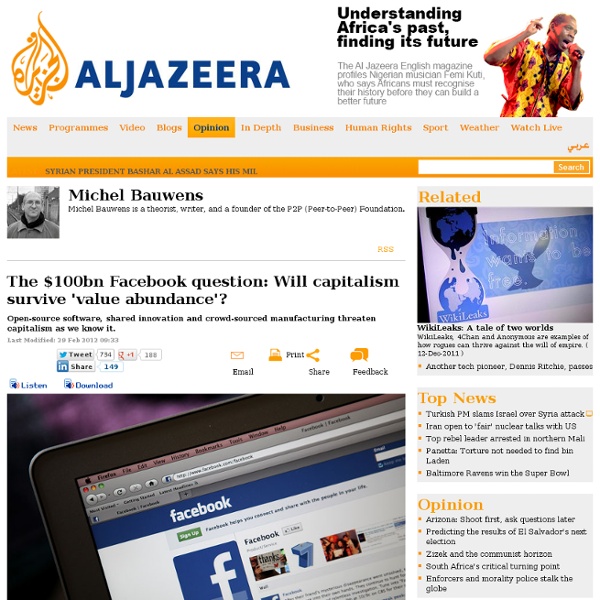 Chiang Mai, Thailand - Does Facebook exploit its users? And where is the $100bn in the company's estimated value coming from? This is not a new debate. It resurfaces regularly in the blogosphere and academic circles, ever since Tiziana Terranova coined the term "Free Labour" to indicate a new form of capitalist exploitation of unpaid labour - firstly referring to the viewers of classic broadcast media, and now to the new generation of social media participants on sites such as Facebook. This term was recently relaunched in an article by University of Essex academics Christopher Land and Steffen Böhm, entitled "They are exploiting us! This line of argument is misleading, however, because it conflates two types of value creation that were already recognised as distinct by 18th century political economists. But Facebook users are not workers producing commodities for a wage, and Facebook is not selling these commodities on a market to create surplus value. Engineering scarcity Related:  Hyperglobalization and Finance Capitalism

Jungle Ethics Financialism vs. Free Market Capitalism Proposals for adequate regulation and enforcement in the financial markets often run into objections from advocates of free-market capitalism. Like any discussion that involves “isms,” a lot of confusion and hard feelings can be generated by a failure to examine the assumptions and preconceptions that cluster around the central conception. We need a definition. For the sake of clarity, I will first detour into a discussion of what this form of capitalism is not, describing its antithesis – jungle-ethics financialism. Financialism is an economic system where the primary activity consists of creating and manipulating financial instruments. However, when financialism sets in, financial instruments become progressively further removed from their role in supporting commerce in the real world and develop a life of their own, a weird shadow dimension, a hall of mirrors, a distorted alternate reality that intersects and reacts with the real economy in unpredictable and destructive ways.

Essay of the Day: From Product-centered to People-centered economic development (Michel Bauwens: The following is a crucial distinction to make, we strongly recommend you read this) By Sam Rose, Paul Hartzog and informed in part by collaborations with Steve Bosserman. Production centered supply chain business development depends on: unlimited growthexclusive access to resourcesartificial scarcity around actually abundant resourcespeople filling roles in a linear systemhoarding of surplus This way of operating focuses on what is being produced, and requires people to be largely fixed into roles to serve the linear supply chain model. People and natural systems are generally considered to be “resources” that are raw materials and labor for production and distribution, end-points consumption. Markets for product-centered supply chain business development tend to look at statistics and averages of different factors of people and resources, in order to identify the largest markets. People centered business network ecosystem development Steve Bosserman comments:

Newsletter - Vol 9 Issue 6 - International news from the Cultural Contact Point The Arts Council hosts the EU Cultural Contact Point Ireland: your resource for European funding for culture The Culture Programme 2007–2013 was established to enhance the cultural area shared by all Europeans, which is based on a common cultural heritage through the development of cooperation activities among cultural operators from 37 eligible countries. The Programme offers funding opportunities to all cultural sections and all categories of cultural operators contributing to the development of cultural cooperation at European level, with a view to encouraging the emergence of European citizenship.With a total budget of 400 million EUR for 2007 – 2013 the Programme co-finances around 300 different cultural actions per year. CCP Ireland to host EU funding info day in Cork When: Tuesday 6 March, 11amWhere: Triskel Arts Centre The aim of the event is two-fold. Communicating Europe Initiative: funding available  The promotion of cultural diversity and intercultural

John Lanchester · Marx at 193 · LRB 5 April 2012 In trying to think what Marx would have made of the world today, we have to begin by stressing that he was not an empiricist. He didn’t think that you could gain access to the truth by gleaning bits of data from experience, ‘data points’ as scientists call them, and then assembling a picture of reality from the fragments you’ve accumulated. Since this is what most of us think we’re doing most of the time it marks a fundamental break between Marx and what we call common sense, a notion that was greatly disliked by Marx, who saw it as the way a particular political and class order turns its construction of reality into an apparently neutral set of ideas which are then taken as givens of the natural order. Empiricism, because it takes its evidence from the existing order of things, is inherently prone to accepting as realities things that are merely evidence of underlying biases and ideological pressures. I, on the other hand, am an empiricist. He was right: no alternative has developed.

Save the Greeks from their Saviours! says Alain Badiou | European Conference Against Austerity & Privatisation At this moment, that one out of two Greeks is unemployed, 25.000 homeless wander in the streets of Athens, 30% of the population is living below the poverty line, thousands of families have to put their children in institutions so they won’t die of hunger and cold, and refugees and newly poor citizens struggle for garbage bins in public places, the “saviors” of Greece, under the pretext of the Greeks “not putting lots of effort” impose a new plan of help that doubles the given lethal dose. A plan that eliminates the labor law, and condemns the already poor people to extreme poverty, while vanishing the middle classes. There is no chance this idea is the “salvation” of Greece: all the -worthy of the name- economists agree on that. But in order that the counterattack of neoliberalism to achieve its goal, needs a system to established, that abolishes the most basic democratic rights. We are at a no turning back point. If not us, who will? If not now, when will it be? Translations:

Funding - The European Cultural Contact Point Ireland In this section of the website you will find information on every aspect of funding under the Creative Europe Culture Sub-Programme 2014-2020 including: making an application; funding deadlines;guidelines for each funding scheme and how to find project partners. Don't forget to visit our frequently asked questions (FAQ) section, where we list commons issues related to funding and the Culture Sub-programme. Funding deadlines The Creative Europe Culture Sub-Programme has a fixed calendar of deadlines for the funding period 2014–2020. More information and links to where you can download guidelines for each funding scheme can be found in the available funding section. *There will be one more call for proposals for the duration of the Creative Europe programme under the European Networks strand in July 2016 for 4 year framework agreements. Back to top

Capitalism: A Ghost Story | Arundhati Roy Is it a house or a home? A temple to the new India, or a warehouse for its ghosts? Ever since Antilla arrived on Altamont Road in Mumbai, exuding mystery and quiet menace, things have not been the same. “Here we are,” the friend who took me there said, “Pay your respects to our new Ruler.” Antilla belongs to India’s richest man, Mukesh Ambani. But Gush-Up certainly has. The word on the street (and in the New York Times) is, or at least was, that after all that effort and gardening, the Ambanis don’t live in Antilla. In India, the 300 million of us who belong to the new, post-IMF “reforms” middle class—the market—live side by side with spirits of the nether world, the poltergeists of dead rivers, dry wells, bald mountains and denuded forests; the ghosts of 2,50,000 debt-ridden farmers who have killed themselves, and of the 800 million who have been impoverished and dispossessed to make way for us. Mukesh Ambani is personally worth $20 billion. A whole spectrum of corruption A.

The Penguin and the Leviathan: The Triumph of Cooperation Over Self-Interest Here’s a quit extensive synthesis of “The Penguin and the Leviathan,” in my opinion a wonderful book for anyone who is interested in improving and transforming our economic and political institutions. Human motivation is a subject that ‘makes me tick’. I really enjoyed reading “The Penguin and the Leviathan”, not only because it paints a much nicer picture of “human nature” than the one used by the free marketeers, but also because it gives a glimpse of a future, higher form of society that will be much more based on human cooperation. Benkler gives a lot of examples, going from Southwest Airlines and Toyota’s shop floor processes to Chicago’s community policing program, Wikipedia and Linux. The Penguin and the Leviathan – How Cooperation Triumphs Over Self-Interest Statements on human nature are always a bit tricky because of the complexity of the subject matter. The first part of the title of the book needs a little bit explaining. A Vicious Circle A New Vision on Human Nature

Available funding - The European Cultural Contact Point Ireland The Creative Europe Culture Sub-programme has four main funding schemes each for a particular type of action. The objectives of the programme are pursued through the implementation of the following measures. Support for European Cooperation Projects The main objectives of the support for transnational cultural cooperation projects are to support: - transnational circulation and promotion of cultural and creative works and transnational mobility of cultural and creative players, in particular artists; - audience development; - innovation and creativity. Category 1 - Smaller scale cooperation projects • Involves a minimum of three partners (a project leader and two other partners) from three eligible countries Category 2 - Larger scale cooperation projects • Involves a minimum of six partners (a project leader and at least five other partners) from six different countries taking part in the Creative Europe programme Download guidelines for Support for European Cooperation Projects here.

bifo says relax by malcolm harris | thestate Of the anti-capitalist scholars and intellectuals who prescribe a political program, Franco Berardi might have the most counter-intuitive ideas. In his many articles, books, and lectures, Berardi pushes a curious line against a mind-warping market culture. During the current period of youth-led urban unrest, Berardi has consistently preached a resistance strategy that emulates the process of aging. In a new formulation he calls “post-futurism,” Berardi poses the Futurist fetishization of muscular youth against “the force of exhaustion, of facing the inevitable with grace, discovering the sensuous slowness of those who do not expect any more from life than wisdom.”1 We have enough things, he writes; what we really want is more time in which to flourish. This program of exhaustion is posed opposite the pulls of what neologism-happy Berardi labels “semiocapital.” He writes that “energy is fading in the postmodern world for many reasons that are easy to detect. . Yes, we want war.