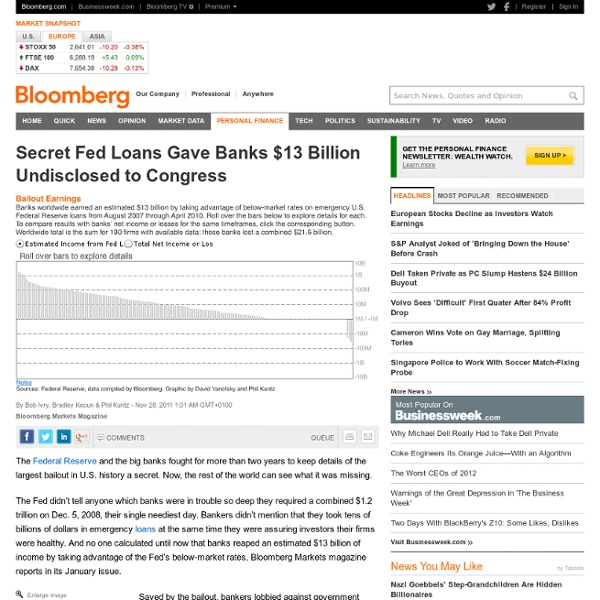 The Federal Reserve and the big banks fought for more than two years to keep details of the largest bailout in U.S. history a secret. Now, the rest of the world can see what it was missing. The Fed didn’t tell anyone which banks were in trouble so deep they required a combined $1.2 trillion on Dec. 5, 2008, their single neediest day. Saved by the bailout, bankers lobbied against government regulations, a job made easier by the Fed, which never disclosed the details of the rescue to lawmakers even as Congress doled out more money and debated new rules aimed at preventing the next collapse. A fresh narrative of the financial crisis of 2007 to 2009 emerges from 29,000 pages of Fed documents obtained under the Freedom of Information Act and central bank records of more than 21,000 transactions. ‘Change Their Votes’ The Fed, headed by Chairman Ben S. $7.77 Trillion The amount of money the central bank parceled out was surprising even to Gary H. ‘Motivate Others’ JPMorgan Chase & Co. Big Six Related:  Banking and finance issues

Barry McGuire - Blog Chart Of The Day: Fed Interventions Since 2008 The chart below, via Stone McCarthy, shows the months with Fed intervention since December 2008. That in the past 42 or so months, less than one third have been intervention-free, should close any open questions about whether the stock "market" is anything but a policy vehicle used by the Fed to perpetuate a broke(n) status quo now entirely dependent on every market up (and down) tick. We dread to think what would happen to those record low US bond yields if the market were to be left on its own without the backstop of guaranteed Fed intervention in the interest rate market... ironically something which Barclays is in boiling hot water for right about now. And a detailed breakdown:

News Responds to Bernanke Criticism of U.S. Bank-Rescue Coverage Federal Reserve Chairman Ben S. Bernanke said in a letter to four senior lawmakers yesterday that recent news articles about the central bank’s emergency lending programs contained “egregious errors.” While Bernanke’s letter and an accompanying four-page staff memo posted on the Fed’s website didn’t mention any news organizations by name, Bloomberg News has published a series of articles this year examining the bailout. The latest, “Secret Fed Loans Gave Banks $13 Billion Undisclosed to Congress,” appeared Nov. 28. “Bloomberg stands by its reporting,” said Matthew Winkler, editor-in-chief of Bloomberg News, who responded to the criticisms today on “Surveillance Midday” with Tom Keene. Here is a point-by-point response by Bloomberg News to the Fed staff memo. From Fed memo: “These articles have made repeated claims that the Federal Reserve conducted ‘secret’ lending that was not disclosed either to the public or the Congress. Editors: Robert Friedman, John Voskuhl

Home Exposing the Fed: What is the Federal Reserve? Part 3 Editor Note: For those of you who are not familiar with Marilyn MacGruder Barnewall, she is the woman who wrote the definitive book on Ambassador Lee Wanta, Wanta! Black Swan, White Hat. I listened to several interviews with Marilyn that were conducted by Teri Ambach and the team at Global News and Views on Facebook. Marilyn is fantastic and extremely knowledgable. If she has something to say, you’d be wise to listen and take note. (Marilyn MacGruder Barnewall, Global Financial Affairs Editor) Unfortunately, the same cannot be said about the Federal Reserve System. It is a privately held corporation owned by bankers… most of whose names are seen on Wall Street (though international banks now own larger and larger shares of the Federal Reserve System, placing control of America’s economy in the hands of non-American foreigners). Before talking about what the Federal Reserve System does, one other important fact needs to be mentioned: The Federal Reserve is an unlawful organization.

Debt Ceiling 2013: A Timeline Of Fights Over The U.S. Debt Limit Since 1917 About now, many Americans wish they had never heard the term debt ceiling -- or knew so much about what it meant. But with lawmakers hesitant to approve an increase in the amount that the U.S. government is authorized to pay for debts already incurred by Congress, this phrase has become a household word, as it were. Although it feels like this latest gridlock between Congress and President Barack Obama is yet another indication of today’s steely partisan politics, debt-ceiling conflicts have been to one degree or another Washington staples for the past four decades. The first time the debt ceiling came into view was in 1917 with the adoption of the Second Liberty Bond Act, which placed limits on expenditures for large categories of debt such as bonds and bills. Between 1941 and 1945, federal debt skyrocketed because of World War II, from $49 billion the former year to $268 billion the latter year. From the 1980s onward, the federal budget and debt rose significantly.

MER debate: Mutual fund industry stands its ground | Personal Finance Andrew Barr/National Post High mutual fund fees charged by companies like Investors Group are once again under the microscope, but I have no fear my modest holding in the stock of IGM Financial Inc. is in much jeopardy. Investors Group and I have exchanged views the past week, online at financialpost.com and in print, about how much value its clients get from its robust management expense ratios (MERs). Many of its funds sport MERs of 2.5% or more; even its bond funds are just shy of 2%, which in today’s low-interest-rate environment is an outrage in itself. Even though there has been a sea change in how investors think, I have little doubt that IGM Financial, the owner of Investors Group, has a model that will keep minting money for shareholders — selling mutual funds and “advice” to investors who can’t be bothered with details like MERs. Frankly, I’m amazed the fund industry has stood its ground as well as it has. Not Apples to Apples, you say?

Why This Harvard Economist Is Pulling All His Money From Bank Of America A classicial economist... and Harvard professor... preaching to the world that one's money is not safe in the US banking system due to Ben Bernanke's actions? And putting his withdrawal slip where his mouth is and pulling $1 million out of Bank America? Say it isn't so... From Terry Burnham, former Harvard economics professor, author of “Mean Genes” and “Mean Markets and Lizard Brains,” provocative poster on this page and long-time critic of the Federal Reserve, argues that the Fed’s efforts to strengthen America’s banks have perversely weakened them. First posted in PBS. Is your money safe at the bank? Last week I had over $1,000,000 in a checking account at Bank of America. Why am I getting in line to take my money out of Bank of America? Before I explain, let me disclose that I have been a stopped clock of criticism of the Federal Reserve for half a decade. Let me explain: Currently, I receive zero dollars in interest on my $1,000,000. They will not be able to return my money if:

DAGONG DOWNGRADES US TO A- FROM A LPS “First Look” Mortgage Report: November  Month-End Data Shows an  Increase in Delinquencies JACKSONVILLE, Fla. – December 19, 2011 – Lender Processing Services, Inc. (NYSE: LPS), a leading provider of integrated technology, data and analytics to the mortgage and real estate industries, reports the following “first look” at November 2011 month-end mortgage performance statistics derived from its loan-level database of nearly 40 million mortgage loans. *Non-current totals combine foreclosures and delinquencies as a percent of active loans in that state. Notes:(1) Totals are extrapolated based on LPS Applied Analytics’ loan-level database of mortgage assets(2) All whole numbers are rounded to the nearest thousand The company will provide a more in-depth review of this data in its monthly Mortgage Monitor report, which includes an analysis of data supplemented by in-depth charts and graphs that reflect trend and point-in-time observations. About Lender Processing Services Lender Processing Services, Inc.

The Federal Reserve Explained in 7 Minutes Have you ever caught yourself wondering how nearly every country on earth can be in debt to outside sources? In my world, if I owe a friend $10 and he owes me $5 then I simply give him $5 and we call it “even.” But that’s not how the world of international banking works. If you have a minute, Wikipedia tries to keep an updated National Debt List. Looking at the chart is very eye-opening. The reason that nearly every nation on earth has external debt is simple. Even in cases like China, where they own more of our debt than anyone, the Chinese still ultimately answer to the world banking elite. We hear a lot of talk about our National Debt and “debt ceilings” coming out of Washington D.C. but very few talk about the real issues. As long as privately held banks like The Federal Reserve rule the world, then people will always be debt slaves. Furthermore, until people truly start to understand the world banking system and get mad enough to force their will then nothing will change.

Real Estate & REIT Modeling | Breaking Into Wall Street "How to Learn Real Estate and REIT Financial Modeling and Dominate Your Investment Banking Interviews – and Fast-Track Your Way to Top Bonuses and Exit Opportunities After You Land Your Offer and Start Working" The Breaking Into Wall Street Real Estate and REIT Modeling Course gives you the bleeding edge advantage you need to master real-world real estate and REIT financial modeling and valuation. You gain immediate access to Step-by-Step Video Tutorials, Detailed Real-Life Case Studies, Unlimited Lifetime Support, plus an Unconditional Money-Back Guarantee to put you on the fast track to a lucrative career... Master the nuances of real estate and REIT accounting, valuation, and financial modeling with detailed, step-by-step video training. Learn how to use REIT equity research and SEC filings like a pro. Pick everything up fast in 3 simple steps: 1) Understand the concept behind the model. 2) Watch a pro build the model. 3) Practice building the model yourself. NEW! What You Get...

IRS Agent Whistleblowers Shelley L. Davis - The first, and last, official IRS Historian. Source: Mr. For 16 years I worked as an historian for the federal government. My testimony today will touch briefly on three areas: 1. ) The cultural climate of the IRS; 2. ) List keeping at the IRS; 3. ) The IRS definition of "tax protester." My introduction to the culture of the IRS came during my earliest days with the tax agency, in the fall of 1988. This reluctance to think about the past translated into routine day-to-day operations, meaning that all documents were tossed, shredded, whatever, when a program was completed--or shut down as in the case of many IRS computer projects. As time went on, I realized that this not only made my job as historian virtually impossible, but that it guaranteed that the IRS could never be held accountable for its actions. In my early years with the IRS, a good question to ask was, "Where are the records?"

Sound Canadian Banks Offer Opportunity The Safest Banks in the World Canadian banking is widely considered the safest banking system in the world, ranked as the world's soundest for the past four years by the World Economic Forum. However, one’s image of the word “bank” does not equate to safety and security in the minds of many. Recent headlines could have read, Bank of Montreal (BMO) Reports Great Year, Stocks Tumble or might have said TD Bank (TD) Down on Praise from Fitch or something like Royal Bank (RY) Softer after Good News. What is going on here is if your last name is “bank” it does not seem to matter what your first name is or where you live, the perception among investors is that you come from a bad family. That is incorrect when it comes to Canadian banks, which are a world apart from their 2nd cousins elsewhere. During the recent financial crisis banks in the U.S., Europe and many other regions failed. Apples and Oranges Both apples and oranges are fruits; however, they are not the same. Tomatoes