Seed Saving Handbook: Learn How to Save Seeds From Common Garden Vegetables—Free! 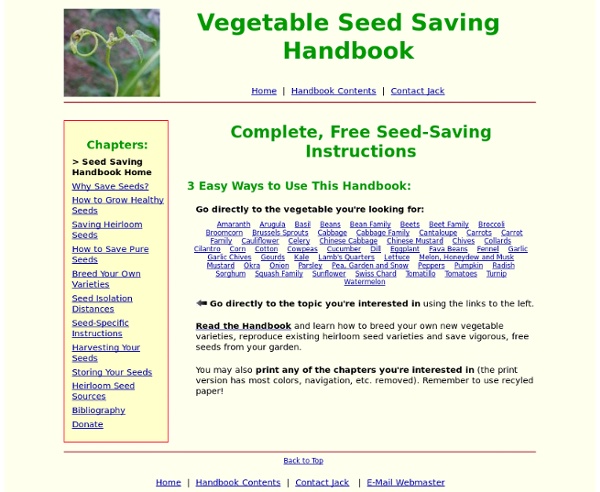 Growing Industrial Hemp in Ontario Table of Contents Introduction Industrial hemp (Cannabis sativa) is one of the oldest cultivated plants in the world. In 1998, Canada created Industrial Hemp Regulations under the Controlled Drugs and Substances Act. Under the Regulations, industrial hemp seeds must be of a variety listed in Health Canada's List of Approved Cultivars. Anyone found in possession of hemp plant parts - other than the stalk and non-viable grain, without the appropriate licence - is in possession of a controlled substance and may be charged under the Act. Industrial hemp may only be grown under licence from Health Canada. Industrial hemp licences are issued for a calendar year only and must be renewed if product is carried into the new year. Figure 1: Power-washing the combine to remove illegal material. Licences to grow industrial hemp are issued for crops of 4 ha (10 acres) or more. Development of the Industry Historically, industrial hemp is known for its bast fibre used to make strong fabrics and ropes.

DIY Aquaponics - Aquaponics made easy so you can do it yourself - Benefical Bacteria for the Growbed Bacteria play an important role the health and well being of your aquaponics system by removing the ammonia from the water. This is not a special or magical thing unique to aquaponics, filters in home aquariums as an example use the same families of bacteria to perform the necessary task of removing the ammonia in a very similar fashion. The Nitrogen Cycle When our fish excrete waste (we'll call it poo or poop from now on because we're all friends here) the fish poo contains a very high percentage of ammonia. This is where our bacteria come into play. Your aquaponics system growbed is an ideal environment for these bacteria to flourish but it is important to bear in mind that both nitrosomanas and nitrobacter both prefer a growbed that is at least 30cm (1 foot) deep. Cycling your Aquaponics System The nitrosomanas and nitrobacter bacteria are present everywhere around us in the air, in the soil and in water and it is really quite easy to encourage them to inhabit your aquaponics system.

Living Seed Library | A collection of info for the new world Earth house | Natural Building Heirloom Seeds Ancient Tomato Growing Secrets Increase Your Tomatoes and Keeps Plants Healthy Mexican group tackles pollution with vertical gardens When people think of Mexico City, they think of many different things — traffic congestion, for example, or colonial churches, or snow-covered volcanoes . . . or traffic congestion. They do not think of the pristine quality of the air. There’s a reason for that. Although far cleaner than it used to be, the atmosphere that sustains the city’s roughly 20 million residents remains severely laden with contaminants. But that doesn’t mean a city can’t dream, and the massive urban conglomeration that serves as Mexico’s capital is dreaming these days — en verde. “We wanted to make something that would cause people to turn around, something that would not be overlooked, and in this way to create consciousness,” explains Mexican architect Fernando Ortiz Monasterio, the designer of seven living, breathing sculptures that have recently sprouted at some of the capital’s busier intersections. In other words: vertical gardens. But the city suffers from a chronic shortage of public gardens.

Seed Starting Tips for Beginner Gardeners - MrBrownThumb Over the past few years, I have amassed a number of posts here about growing from seed that should be helpful to beginner seed starters. While these seed starting tips are aimed at beginners hopefully, they will be of use and interest to more experienced gardeners who may not have done much seed starting in the past. These tips on seed starting cover what items you can repurpose in your home to make seed starting pots, seed germination, and the types of seed staring mixes you can use. If you find that there’s a seed starting question that has not been answered you can leave a comment below or try my seed snatcher search engine which is exclusively devoted to information on seed starting and seed saving. Organize Your Seeds Before Seed Starting The first thing I do in preparation for starting seeds is to take inventory of my seeds. Seed Starting Soils Last year I tried Jiffy-Mix from Ferry Morse and it worked fine. Seed Starting Pots Biodegradable Seed Pots Do You Need Seed Starting Lights?