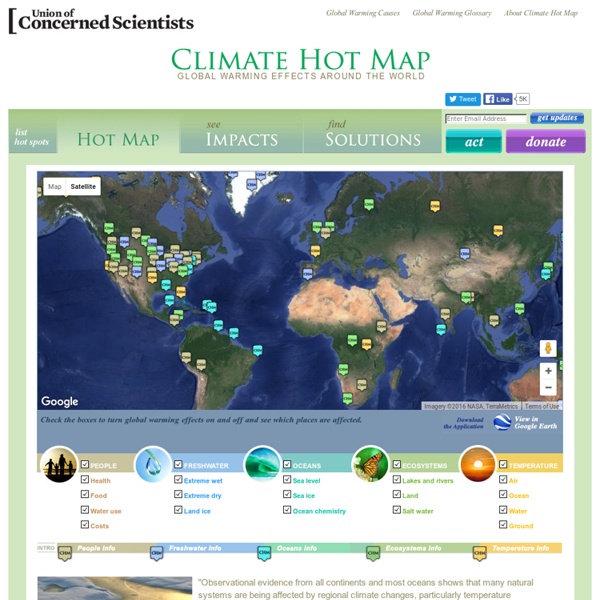 "Observational evidence from all continents and most oceans shows that many natural systems are being affected by regional climate changes, particularly temperature increases." –Intergovernmental Panel on Climate Change (IPCC), 2007 Explore the signs of global warming on this map or Google Earth. The evidence of climate change includes heat waves, sea-level rise, flooding, melting glaciers, earlier spring arrival, coral reef bleaching, and the spread of disease. The greatest concentration of global warming indicators on the map is in North America and Europe because that is where most scientific investigation has been done to date. As scientists focus increasingly on fingerprints of global warming in other regions—from Russia to Antarctica and Oceania to South America—the evidence they find will be added to the map.

Global Warming Simulation, Global Warming Interactive, Climate Change Interactive First Mammal Species Goes Extinct Due to Climate Change The humble Bramble Cay melomys has disappeared from its island in the Great Barrier Reef. Climate Change Making Calendars Run Amok People in Central Asia are recalibrating their system of time to adapt to a changing ecosystem. The Great Energy Challenge The National Geographic initiative is a call to action to become actively involved, to learn more and do more—to change how we think about and consume energy so that we can all help tackle the big energy questions. U.S.' These Maps Show You How to Live, Not Just Where Data for GOOD Knowledge is the first step on the way to progress. It used to be that paper maps were the free gifts that came with your new compass, graphically representing geography via points, lines, and fire-breathing dragons—all of which indicated orientation, distance, latitude, longitude, and the sheer vastness of uncharted territory. But today’s multidimensional digital maps are comprehensive, interactive, and they’ve got the compass built right in. Plus, they’re changing the way we interact with our environments and with each other. According to Di-Ann Eisnor, the founder of map-based driving app Waze, “People really do want to help each other, and if they feel like they are part of something that is helping make a difference, they become passionate about it.”

20 Years of Effort and Achievement UNFCCC -- 20 Years of Effort and Achievement Key Milestones in the Evolution of International Climate Policy November 1988 The world passes 400ppm carbon dioxide threshold. Permanently In the centuries to come, history books will likely look back on September 2016 as a major milestone for the world’s climate. At a time when atmospheric carbon dioxide is usually at its minimum, the monthly value failed to drop below 400 parts per million (ppm). That all but ensures that 2016 will be the year that carbon dioxide officially passed the symbolic 400 ppm mark, never to return below it in our lifetimes, according to scientists. Because carbon pollution has been increasing since the start of the industrial revolution and has shown no signs of abating, it was more a question of “when” rather than “if” we would cross this threshold. The inevitability doesn’t make it any less significant, though.

Young People's Trust For the Environment Many, many species of plants and animals are likely to be affected by climate change. Let’s pick out a few examples: Polar Bears – These wonderful animals need ice to live on; it is their habitat and they are specifically adapted to hunting and breeding on and around it. Seals need ice flows too – to rest and give birth to their pups. Earth - Your life on earth Explore BBC Earth's unique interactive, personalised just to you. Find out how, since the date of your birth, your life has progressed; including how many times your heart has beaten, and how far you have travelled through space. Investigate how the world around you has changed since you've been alive; from the amount the sea has risen, and the tectonic plates have moved, to the number of earthquakes and volcanoes that have erupted.

154 Australian scientists demand climate policy that matches the science 154 Australian experts have signed on open letter to Prime Minister Malcolm Turnbull demanding urgent action on climate change that matches the dire warnings coming from climate scientists. The letter, organised by Australian National University climatologist Andrew Glikson, calls on the federal government to make “meaningful reductions of Australia’s peak carbon emissions and coal exports, while there is still time”. Signatories include leading climate and environmental scientists such as the Climate Council’s Tim Flannery, Will Steffen, and Lesley Hughes, as well as reef scientists Ove Hoegh-Guldberg and Charlie Veron. They point out that July 2016 was the hottest month ever recorded, and followed a nine-month streak of record-breaking months.

10 Brilliant Social Psychology Studies Ten of the most influential social psychology experiments. “I have been primarily interested in how and why ordinary people do unusual things, things that seem alien to their natures.Why do good people sometimes act evil?Why do smart people sometimes do dumb or irrational things?” –Philip Zimbardo Like eminent social psychologist Professor Philip Zimbardo (author of The Lucifer Effect: Understanding How Good People Turn Evil), I’m also obsessed with why we do dumb or irrational things. Climate Central Special Report National Parks have grown up with photography. So it’s only fitting that in the last days of ice in Montana’s Glacier National Park, Lisa McKeon is using a camera to show how quickly climate change has killed off the park’s namesakes. After all, it’s one thing to note that of the park’s 150 glaciers that existed in the late 1800s, only 25 of them remain today. But it’s another to see what that cold, hard fact looks like on the landscape. For nearly 20 years, McKeon, a U.S. Geological Survey biologist, has prowled dusty archives to find old photos showing the splendor of the park’s glaciers in decades past.

Ethiopia May Paradoxically Benefit From Climate Change Suffering from corruption, poor sanitation, malnutrition, and enormous economic inequality, Ethiopia is a troubled nation to say the least. However, a new study reveals that it may be getting a welcome boost from a most unlikely source – climate change. Writing in the journal Climatic Change, a team from Virginia Tech (VT) has concluded that the flow of water to the Ethiopian Blue Nile Basin (BNB) will likely increase as the world inexorably warms. This will allow crops to be grown throughout multiple seasons of the year, potentially rescuing its faltering agricultural sector. Pollution Locator: USA Over 4 billion pounds of toxic chemicals are released by industry into the nation's environment each year, including 72 million pounds of recognized carcinogens. Scorecard can give you a detailed report on chemicals being released from any of 20,000 industrial facilities, or a summary report for any area in the country. Scorecard spotlights the top polluters in the U.S., and ranks states and counties by pollutant releases. Provide your zipcode to get a report for your community, or use the Pollution Locator to search for reports on specific areas.

Cigarettes, asbestos, now fossil fuels. How big business impacts public health The decisions reached at the recent Coag energy council meeting are reminiscent of a long series of failures to understand the impacts of powerful business on the health of the community. The failures extend historically from tobacco, to asbestos to the health scourges of coal, and now to the health and community impacts of the unconventional gas industry. It is too much to believe that governments fail to understand the implications. Just 30 years ago, Australia was awash with tobacco advertising and promotion by tobacco companies and their agents through multiple media outlets and sporting organisations, supported by newspaper editorials opposed to any restrictions. Major political parties readily accepted large donations, and some individual politicians were not immune to personal gifts and favours. Tobacco lobbyists had ready access to legislators to ensure that measures to deal with the health consequences were thwarted.

This is a very good site because it shows globl warming hotspots and the cause, effect and what we can do to take action. by i216 Apr 3