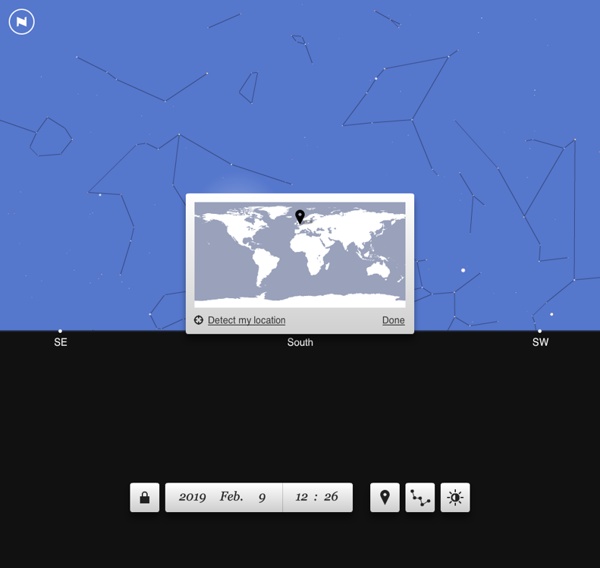 LEARN ASTROLOGY: Free Step-by-Step Lessons & Exams Step-by-Step Its fun and easy to learn astrology if you take it one step at a time. What is Astrology? Astrology is the science of finding connection between those of us on the Earth and the Cosmos. It follows the patterns of movement by the planets and stars and assigns meanings to them that relate to human motivation and consciousness. 7 Space Simulators That Let You Explore the Universe Why should Mars rovers have all the fun? If you're tired of standing by while Curiosity rolls around up there, it's time to head out on the open exosphere and explore the universe for yourself — digitally, of course. SEE ALSO: 10 Must-Follow Tumblrs for Science Lovers

Five-Minute Film Festival: Classroom Resources for Physics Teachers Have you ever wondered why airplanes stay in the air? What a vortex is? How gravity works? Physics can tell you! Physics is the amazing study of how the world around us works. 50 Years of Incredible Space Images From the European Southern Observatory This week marks the 50th anniversary of one of the world’s leading astronomical institutions, the European Southern Observatory. In honor of ESO’s birthday, we take a look at some of its most stunning shots of the night sky, amazing objects in space, and the organization's beautiful telescope facilities. ESO started when astronomers from five European countries – Belgium, France, Germany, the Netherlands, and Sweden – came together on Oct. 5, 1962 to build a telescope in the Southern Hemisphere. Having a large telescope south of the equator gave these member states access to unprecedented clear skies and celestial objects that simply can’t be seen from the Northern Hemisphere, such as the Magellanic Clouds.

Primary Teachers' Stress - Geoff a Troman, Peter Woods books.google.com.mx - The single most cited reason for not choosing teaching as a career is stress, which is also the most common reason for leaving the profession. This book looks at the causes of teacher stress, asks why thousands of teachers (after expensive training) are leaving the profession every year due to stress,... Teachers' Stress Free birth chart This natal chart calculator will generate the position of the planets at the moment of birth, and also a full interpretation. All other astrological features are directly available in the side menu: many types of graphics, daily horoscopes, love comparisons, transits, progressions, and more. This services are free for occational users, but regular users are asked to pay a subscription. In order to calculate the Ascendant, you need to provide the exact time of birth and the place of birth.

No One Wants to Live in My 'Elysium'-Style Simulation Orbital Space Colony They will also be a pain in the ass to run. And I speak from experience on this because I briefly governed my own orbital colony. My time in command did not end well. Joe Strout gave me the opportunity to fail. A software engineer with a huge background in creating complex simulations, Strout is the creator of High Frontier, which seeks to translate the mechanics of the SimCity series into a vacuum. Periodic Table Battleship I have posted a lot about Chemistry lately. My oldest has been studying it and really enjoying it. I love his science-y mind! Beyond 2012: Why the World Didn't End Beyond 2012: Why the World Didn't End If you're reading this story, it means the world didn't end on Dec. 21, 2012. Despite reports of an ancient Maya prophecy, a mysterious planet on a collision course with Earth, or a reverse in Earth's rotation, we're still here. The Mayan connection "was a misconception from the very beginning," says Dr.

The Emotions of Teacher Stress - Denise Carlyle, Peter Woods "Eggshell days" is how one teacher in this study describes the experience of stress. Stressed teachers here relate their experiences, perceptions and feelings as they hit rock-bottom. They describe the help and the strategies that enable them to recover and the ways they renegotiate their lives to move forward. Their stories throw light on what has become a crucial -- and increasing -- personal, family and societal issue that is increasingly prevalent among educators and other public service providers. They also offer hope to others in a similar plight.

An Introduction To Galactic Mathematics An Introduction To Galactic Mathematics by Robertino Solàrion As time goes by and as we come across more and more information concerning the "occult sciences," we find a sort of inconsistency in numbers, especially when dealing with the period of time known as one cycle of "the Precession of the Equinoxes." The Precession of the Equinoxes is the period of time that it takes the Earth to pass through one complete cycle of the Constellations of the Zodiac. Our spring equinox is now aligned with the Constellation of Pisces, about 10° into that constellation, going in a "backward" direction towards the end of the Constellation of Aquarius. It takes this planet 72 years to pass through 1° of the Zodiac, or 25,920 years to complete one full cycle.

Apollo 11-17 First man on the Moon - Apollo Moon Landings - QTVR photos from panoramas.dk Less known is that during all the missions they made image sequences which with today's computer technics can be stitched together into 360o interactive panoramas giving you the possibility to view the moon almost as you were there. Many of these panoramas have been published before but in low resolution and displayed in small sizes. Film used on the Moon was a modified Kodak Ectachrome 160. During the last years (2000-2005) the original films have been re-scanned in high resolution and the Apollo 11 images were released the week before the 35 year anniversary. I can now present you for the first time the Moon in interactive 360 degree full screen Quicktime VR.