Cassini’s farewell mosaic of Saturn / 11 / 2017 / Images / ESA Multimedia / ESA Online Videos. Description In a fitting farewell to the planet that had been its home for over 13 years, the international Cassini spacecraft took one last, lingering look at Saturn and the splendid rings during the final leg of its journey and snapped a series of images that has been assembled into this new mosaic. 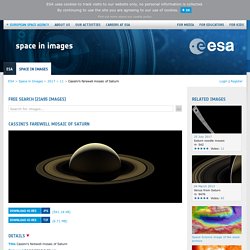 The mission concluded on 15 September with a planned dramatic plunge into the planet’s atmosphere. Two days earlier it captured wide-angle images to cover the planet and its main rings from one end to the other. The moons Prometheus, Pandora, Janus, Epimetheus, Mimas and Enceladus also make a faint appearance in the background. Can you spot them? Cassini probe heads towards Saturn 'grand finale' Media playback is unsupported on your device Cassini has used a gravitational slingshot around Saturn's moon Titan to put it on a path towards destruction. 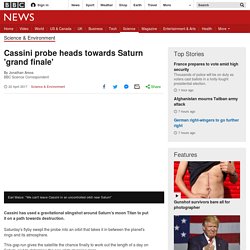 Saturday's flyby swept the probe into an orbit that takes it in between the planet's rings and its atmosphere. This gap-run gives the satellite the chance finally to work out the length of a day on Saturn, and to determine the age of its stunning rings. But the manoeuvre means also that it cannot escape a fiery plunge into Saturn's clouds in September. The US space agency (Nasa) is calling an end to 12 years of exploration and discovery at Saturn because the probe's propellant tanks are all but empty. Juno probe enters into orbit around Jupiter. New Horizons. New Horizons Web Site. Missions to Saturn. Cassini Solstice Mission. NASA Considers 7-Day Mission to Europa. — The low-cost mission would send two landers to Europa. — Spacecraft would be designed to complete their studies in a week, though they may be able to work longer. — Europa has a liquid ocean beneath its icy shell and is a prime candidate for life beyond Earth. 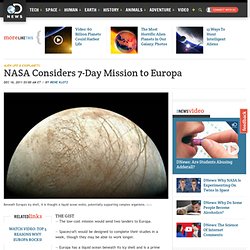 In the search for life beyond Earth, few places beckon as strongly as Europa, an ocean-bearing, ice-covered moon circling Jupiter. But how to pull off the mission, given today's tight science budgets and competing missions, such as a sample return from Mars? Galileo (spacecraft) Galileo was serendipitously positioned to view Comet Shoemaker–Levy 9's impact with Jupiter. 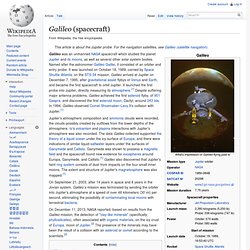 These images, taken several seconds apart, show fragment W colliding (1994) Galileo was an unmanned NASA spacecraft which studied the planet Jupiter and its moons, as well as several other solar system bodies. Named after the astronomer Galileo Galilei, it consisted of an orbiter and entry probe. 28PROBE2.JPG (JPEG Image, 640 × 460 pixels) Addendum to Mars Reference Mission v1. Cassini–Huygens. Nearly a decade after entering orbit, on April 3, 2014, NASA reported that evidence for a large underground ocean of liquid water on Enceladus, a moon of Saturn, had been found by Cassini. 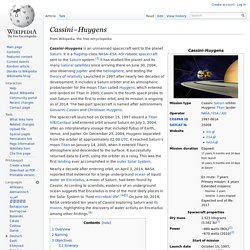 According to scientists, evidence of an underground ocean suggests that Enceladus is one of the most likely places in the Solar System to "host microbial life".[4][5] On June 30, 2014, NASA celebrated ten years of Cassini exploring Saturn and its moons, highlighting the discovery of water activity on Enceladus among other findings.[6] Europa Jupiter System Mission. Probe search. Gravity Recovery and Interior Laboratory. Titan Mare Explorer. Discovery-class finalist[edit] TiME was one of three Discovery Mission finalists that received US$3 million in May 2011 to develop a detailed concept study. 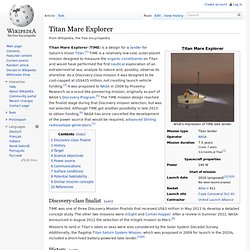 The other two missions were InSight and Comet Hopper. After a review in Summer 2012, NASA announced in August 2012 the selection of the InSight mission to Mars.[8] Missions to land in Titan's lakes or seas were also considered by the Solar System Decadal Survey. Additionally, the flagship Titan Saturn System Mission, which was proposed in 2009 for launch in the 2020s, included a short-lived battery-powered lake lander.[5][9] History[edit] The discovery on 22 July 2006 of lakes and seas in Titan's northern hemisphere confirmed the hypothesis that liquid hydrocarbons exist on it.[10] In addition, previous observations of southern polar storms and new observations of storms in the equatorial region provide evidence of active methane-generating processes, possibly cryovolcanic features from the interior of Titan.[9] Target[edit]

Planets and solar system. Onswipe. In Arthur C Clarke's 2010 A Space Odyssey, the supercomputer HAL issues a last instruction to the Discovery crew ALL THESE WORLDS ARE YOURS EXCEPT EUROPA ATTEMPT NO LANDING THERE. 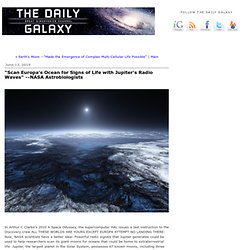 Now, NASA scientists have a better idea: Powerful radio signals that Jupiter generates could be used to help researchers scan its giant moons for oceans that could be home to extraterrestrial life. Jupiter, the largest planet in the Solar System, possesses 67 known moons, including three giant icy moons that might possess liquid oceans underneath their frozen surfaces. Pluto By Moonlight. This image of Pluto and its largest moon, Charon, was taken by the Ralph color imager aboard New Horizons on April 9, 2015, from a distance of about 71 million miles (115 million kilometers). 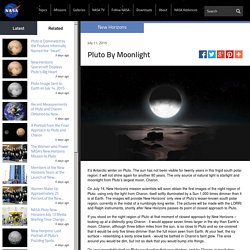 It is the first color image ever made of the Pluto system by a spacecraft on approach. Credits: NASA NASA’s New Horizons spacecraft is three months from returning to humanity the first-ever close up images and scientific observations of distant Pluto and its system of large and small moons. "Scientific literature is filled with papers on the characteristics of Pluto and its moons from ground based and Earth orbiting space observations, but we’ve never studied Pluto up close and personal,” said John Grunsfeld, astronaut, and associate administrator of the NASA Science Mission Directorate at the agency’s Headquarters in Washington. Reaching this third zone of our solar system – beyond the inner, rocky planets and outer gas giants – has been a space science priority for years.