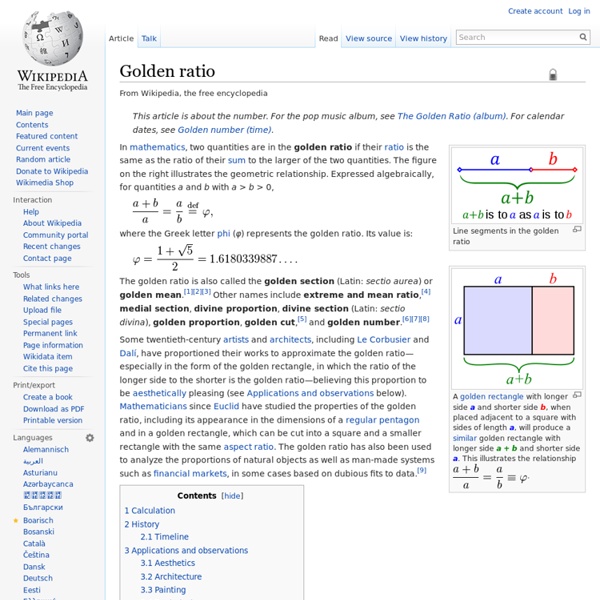 Line segments in the golden ratio In mathematics, two quantities are in the golden ratio if their ratio is the same as the ratio of their sum to the larger of the two quantities. The figure on the right illustrates the geometric relationship. Expressed algebraically, for quantities a and b with a > b > 0, The golden ratio is also called the golden section (Latin: sectio aurea) or golden mean.[1][2][3] Other names include extreme and mean ratio,[4] medial section, divine proportion, divine section (Latin: sectio divina), golden proportion, golden cut,[5] and golden number.[6][7][8] Some twentieth-century artists and architects, including Le Corbusier and Dalí, have proportioned their works to approximate the golden ratio—especially in the form of the golden rectangle, in which the ratio of the longer side to the shorter is the golden ratio—believing this proportion to be aesthetically pleasing (see Applications and observations below). Calculation Therefore, Multiplying by φ gives and History

Divide By Zero About To Divide by Zero is an internet slang term describing an action that leads to an epic failure or theoretically unlikely disaster, such as an earth-shattering apocalypse or a wormhole in the time-space continuum. The concept of division by zero is also associated with the phrase “OH SHI-,” which represents the response of someone that is cut off mid-sentence as a result of the disaster. Origin The earliest known reference to division by zero can be found in a YTMND site titled “1/0 !!!!!!!!!!!!” uploaded on October 3rd, 2005, which featured an artist’s illustration of a black hole.

Jason Santa Maria Ratios and the rule of thirds are relative properties and are derived from inclusive measurements. Which means that not only is a height dependent on and relative to a width, but in order to have the full desired effect, a viewer must be able to see or perceive the boundaries of an object. We usually just regard a piece of work as a whole entity, in much the same way we perceive a painting. 25+ best sites for finding remote work You could have a remote job next month! Use this guide to figure out all the skills you need, where to find the best remote jobs, how to pitch yourself, and whether remote work is right for you. Are you a busy stay-at-home mom who wants to re-enter the workforce but you need flexibility to pick up your kids from school and run errands? Do you have a health issue or disability that would be so much easier to manage at a work from home job? Are you a digital nomad who wants to travel the world while being able to telecommute from anywhere with an internet connection?

Ding Dong Bell The sound of bells In East Anglia, as you look across the fens, villages appear almost like little islands (indeed some of them were islands before the fens were drained) and these villages are dominated by big churches with tall towers. In the past people regulated their lives and passed messages by ringing church bells, which could be heard for miles around, telling the time of day, and giving news of births, marriages and deaths in a parish. The following quotation comes from the ringer's rules from Southhill in Bedfordshire "When mirth and pleasure is on the wing we ring; at the departure of a soul we toll". Bell ringing is good exercise for the body and mind, the bells are heavy and the bellringers have to remember the changes.

SimilarGoldenRectangles.svg - Wikipedia, the free encyclopedia Cancel Edit Delete Preview revert Text of the note (may include Wiki markup) Could not save your note (edit conflict or other problem). Please copy the text in the edit box below and insert it manually by editing this page. Upon submitting the note will be published multi-licensed under the terms of the CC-BY-SA-3.0 license and of the GFDL, versions 1.2, 1.3, or any later version. Microsoft Word Lesson Plans and Activities to Wow Your Students Computer applications teachers are always looking for new and exciting ways to teach Microsoft Word to their students. So where can you find Microsoft Word lesson plans for your students? Rather than spending hours upon hours creating your own lesson plans, wouldn’t you like some that you can simply integrate into your existing computer applications curriculum?

Monte Carlo method Monte Carlo methods (or Monte Carlo experiments) are a broad class of computational algorithms that rely on repeated random sampling to obtain numerical results; typically one runs simulations many times over in order to obtain the distribution of an unknown probabilistic entity. They are often used in physical and mathematical problems and are most useful when it is difficult or impossible to obtain a closed-form expression, or infeasible to apply a deterministic algorithm. Monte Carlo methods are mainly used in three distinct problem classes: optimization, numerical integration and generation of draws from a probability distribution.

Onextrapixel - Web Design & Development Magazine Centuries of observation by men and women from all walks of life have revealed important principles of design and orderliness that tend to naturally create a positive, common human reaction. David Hume described these as "the constant and universal principles of human nature." While these universal design principles may not always be absolutes, understanding them can help you achieve success in a multitude of fields including communications, products, services, engineering, arts and environmental design.