A fanatic is a person who can't change his mind and won't change the subject. - Winston Churchill. How to Learn (But Not Master) Any Language in 1 Hour (Plus: A Favor) Deconstructing Arabic in 45 Minutes Conversational Russian in 60 minutes? 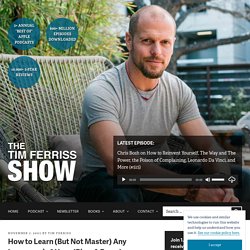 Decadent Lifestyle. Tumblr_kv14etQopl1qzpe8uo1_500.jpg (JPEG Image, 500x339 pixels) We are perfect Buddha Mind. Coffee Cup Analogy « Myriad Hues. A group of alumni, highly established in their careers, got together to visit their old university lecturer. Conversation soon turned into complaints about stress in work and life. Offering his guests coffee, the lecturer went to the kitchen and returned with a large pot of coffee and an assortment of cups: porcelain, plastic, glass, some plain-looking and some expensive and exquisite, telling them to help themselves to hot coffee. When all the students had a cup of coffee in hand, the lecturer said: “If you noticed, all the nice-looking, expensive cups were taken up, leaving behind the plain and cheap ones. While it is normal for you to want only the best for yourselves, that is the source of your problems and stress. What all of you really wanted was coffee, not the cup, but you consciously went for the better cups and are eyeing each other’s cups.”

“Now, if Life is coffee, then the jobs, money and position in society are the cups. Being happy does not mean everything is perfect. Alan Kennedy's Color/Language Project - The Idiom List. Paraprosdokians.

Poole-testimony.pdf (application/pdf Object) The Official Jerry Lewis Comedy Museum and Store. The Announcer's Test This is called the announcer's test. 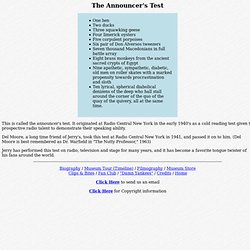 It originated at Radio Central New York in the early 1940's as a cold reading test given to prospective radio talent to demonstrate their speaking ability. Del Moore, a long time friend of Jerry's, took this test at Radio Central New York in 1941, and passed it on to him. (Del Moore is best remembered as Dr. Warfield in "The Nutty Professor," 1963) Jerry has performed this test on radio, television and stage for many years, and it has become a favorite tongue twister of his fans around the world. Biography / Museum Tour (Timeline) / Filmography / Museum StoreClips & Bites / Fan Club / "Damn Yankees" / Credits / Home Click Here to send us an email Click Here for Copyright information. 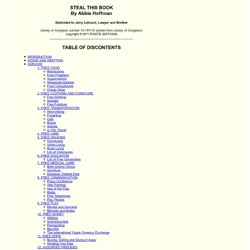 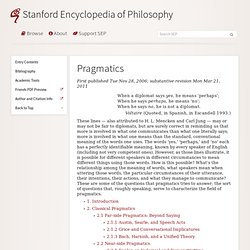 L. Mencken and Carl Jung — may or may not be fair to diplomats, but are surely correct in reminding us that more is involved in what one communicates than what one literally says; more is involved in what one means than the standard, conventional meaning of the words one uses. The words ‘yes,’ ‘perhaps,’ and ‘no’ each has a perfectly identifiable meaning, known by every speaker of English (including not very competent ones). Don’t Mind Your Language… Language. Language, language, language. In the end it all comes down to language. I write to you today on this subject as a way of welcoming you to www.stephenfry.com 2.0 and because, well, it’s a subject worth thinking about at any time and because fewer things interest me quite so much. Image: Nicole Stewart for SamFry. Best toast I've ever heard... - Twurts and Geekery. Cookies by Douglas Adams.

Distinguishing blue from green in language. The application of terms to ranges of the visible spectrum are essentially arbitrary, cultural conventions. 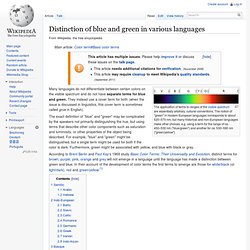 The notion of "green" in modern European languages corresponds to about 520–570 nm, but many historical and non-European languages make other choices, e.g. using a term for the range of ca. 450–530 nm ("blue/green") and another for ca. 530–590 nm ("green/yellow") Many languages do not differentiate between certain colors on the visible spectrum and do not have separate terms for blue and green. They instead use a cover term for both (when the issue is discussed in linguistics, this cover term is sometimes called grue in English).

The exact definition of "blue" and "green" may be complicated by the speakers not primarily distinguishing the hue, but using terms that describe other color components such as saturation and luminosity, or other properties of the object being described. Semitic[edit] Arabic[edit] In Arabic the word for blue is generally azraq (أزرق). Hebrew[edit] Greek[edit]

AMPHIBOLIES. The Egg. The Egg By: Andy Weir You were on your way home when you died. 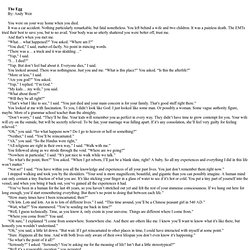 It was a car accident. Nothing particularly remarkable, but fatal nonetheless. You left behind a wife and two children.