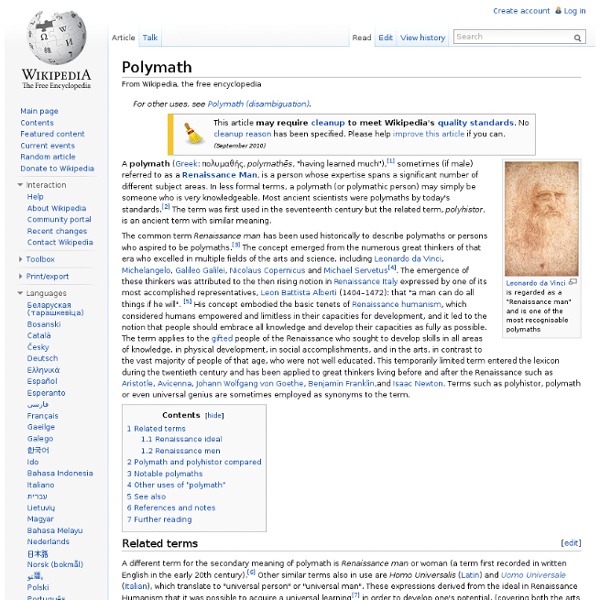 Leonardo da Vinci is regarded as a "Renaissance man" and is one of the most recognizable polymaths. A polymath (Greek: πολυμαθής, polymathēs, "having learned much")[1] is a person whose expertise spans a significant number of different subject areas; such a person is known to draw on complex bodies of knowledge to solve specific problems. The term was first used in the seventeenth century but the related term, polyhistor, is an ancient term with similar meaning. The term applies to the gifted people of the Renaissance who sought to develop their abilities in all areas of knowledge as well as in physical development, social accomplishments, and the arts, in contrast to the vast majority of people of that age who were not well educated. This term entered the lexicon during the twentieth century and has now been applied to great thinkers living before and after the Renaissance. Renaissance ideal[edit] Robert A. Related terms[edit] Polymath and polyhistor compared[edit] See also[edit]

Want to Be a Polymath Like da Vinci? Follow These Four Steps This is a guest post by Christopher Hutton of Liter8 Ideas. Polymath (noun) - A person of wide-ranging knowledge or learning. Polymaths aren’t born, they’re made. They are created by way of human patterns and practices that were copied from the years of Da Vinci and Michelangelo. This post will give you the four crucial steps you should follow when you’re trying to become a polymath. 1. A polymath is a person that knows many things. Determine what you want to be an expert in. It’s helpful if you set exact and specific goals for you to perform. A way of building a plan for personal growth is writing something like a bucket list. For example, I want to write a thorough journalistic treatise on the topic of psychology and economics. It’s also worth picking goals that span a number of realms. Have someone else offer suggestions. Experience and opportunity is always abound, if you only find it and grasp it. 2. But one should know what they are studying, and how trustworthy it is. 3. 4. Your Turn

Transubstantiation The Eastern Orthodox Church, Oriental Orthodox Church, and Church of the East have sometimes used the term "transubstantiation" (metousiosis); however, terms such as "divine mystery", "trans-elementation" (μεταστοιχείωσις metastoicheiosis), "re-ordination" (μεταρρύθμισις metarrhythmisis), or simply "change" (μεταβολή) are more common among them and they consider the change from bread and wine to flesh and blood a "Mystery". History[edit] During the Protestant Reformation, the doctrine of transubstantiation was heavily criticised as an Aristotelian "pseudophilosophy"[17] imported into Christian teaching and jettisoned in favor of Martin Luther's doctrine of sacramental union, or in favor, per Huldrych Zwingli, of the Eucharist as memorial.[18] Patristic period[edit] A letter by Saint Ignatius of Antioch to the Romans, written in AD 106 says: "I desire the bread of GOD, which is the flesh of Jesus Christ Saint Ambrose of Milan (d. 397) wrote: Middle Ages[edit] Protestant criticisms[edit]

In Defense of Polymaths - Kyle Wiens by Kyle Wiens | 8:54 AM May 18, 2012 Polymath is one of those words more likely to show up on the SAT than in everyday conversation. But the reason we don’t use the word much these days has less to do with vocabulary than it has to do with practicality: there aren’t a lot of polymaths around anymore. In case you don’t have your pocket dictionary handy, a polymath is a person with a wide range of knowledge or learning. Still, while we admire the select “geniuses” that can do it all, we tend to disparage the regular folk who attempt to spread their knowledge around a little. But why? “It’s the stupidest thing I’ve ever heard,” Angelou said to the Smithsonian. What’s more, in the digital age, learning has really never been easier — and not just for the “geniuses” that walk among us. Information is everywhere, and it’s often free. iTunesU gives your everyday-Joe an opportunity to get a free, virtual Ivy-league education from his couch. So, why aren’t there more of us polymaths?

Tyche Tyche (English /ˈtaɪki/; from Greek: Τύχη,[1] meaning "luck"; Roman equivalent: Fortuna) was the presiding tutelary deity that governed the fortune and prosperity of a city, its destiny. She is the daughter of Aphrodite and Zeus or Hermes. Increasingly during the Hellenistic period, cities venerated their own specific iconic version of Tyche, wearing a mural crown (a crown like the walls of the city). The Greek historian Polybius believed that when no cause can be discovered to events such as floods, droughts, frosts or even in politics, then the cause of these events may be fairly attributed to Tyche.[2] Stylianos Spyridakis [3] concisely expressed Tyche's appeal in a Hellenistic world of arbitrary violence and unmeaning reverses: "In the turbulent years of the Epigoni of Alexander, an awareness of the instability of human affairs led people to believe that Tyche, the blind mistress of Fortune, governed mankind with an inconstancy which explained the vicissitudes of the time.

Polymath: ‘A Renaissance Man’ Know something about everything and everything about something T H Huxley The only thing that I know is that I know nothing Socrates Definition of polymath: [n] a person of great and varied learning There is an increasing demand for people who can work across boundaries and in many different fields: people who can understand the linkages and connections between the various disciplines of modern life. This web section on polymath explores the connotation ‘A Renaissance Man’ and the relevance of wisdom to current life. The Renaissance man (or woman) knows a great deal regarding a variety of topics and is accomplished in areas of both the arts and the sciences: everything from how to gain weight; to how to take care of legal work without a lawyer. It was thought a Renaissance man should - • Be able to defend himself with a variety of weapons, especially the sword Wisdom Wisdom is the ability to make sound choices, good decisions--the best decision. What is a polymath? What is a polymath? top

Millennium Prize Problems The Millennium Prize Problems are seven problems in mathematics that were stated by the Clay Mathematics Institute in 2000. As of July 2013, six of the problems remain unsolved. A correct solution to any of the problems results in a US $1,000,000 prize (sometimes called a Millennium Prize) being awarded by the institute. The Poincaré conjecture was solved by Grigori Perelman, but he declined the award in 2010. Problems[edit] P versus NP[edit] The question is whether, for all problems for which an algorithm can verify a given solution quickly (that is, in polynomial time), an algorithm can also find that solution quickly. "If P = NP, then the world would be a profoundly different place than we usually assume it to be. — Scott Aaronson, MIT Most mathematicians and computer scientists expect that P≠NP. The official statement of the problem was given by Stephen Cook. The Hodge conjecture[edit] The official statement of the problem was given by Pierre Deligne. The Poincaré conjecture (proven)[edit]

Project Polymath: Catalyzing Interdisciplinary Education for a New Renaissance Mickey Finn (drugs) In slang, a Mickey Finn (or simply Mickey) is a drink laced with a drug (especially chloral hydrate) given to someone without their knowledge in order to incapacitate them. Serving someone a Mickey is most commonly referred to as slipping one a mickey, sometimes spelled "slipping one a mickie".[1] The first popular account of Mickey Finn was given by Herbert Asbury in his 1940 book Gem of the Prairie: An Informal History of the Chicago Underworld. His cited sources are Chicago newspapers and the 1903 court testimony of Lone Star prostitute "Gold Tooth" Mary Thornton. Before his days as a saloon proprietor, Mickey Finn was known as a pickpocket and thief who often preyed on drunken bar patrons. In 1918, Mickey Finn was apparently arrested again, this time for running an illegal bar in South Chicago.[9] Jump up ^ "What's in a Mickey Finn?". Herbert Asbury, Gem of the Prairie: An Informal History of the Chicago Underworld (New York: Alfred A.

THE LAST DAYS OF THE POLYMATH People who know a lot about a lot have long been an exclusive club, but now they are an endangered species. Edward Carr tracks some down ... From INTELLIGENT LIFE Magazine, Autumn 2009 CARL DJERASSI can remember the moment when he became a writer. His wife, Diane Middlebrook, thought it was a ridiculous idea. Even at 85, slight and snowy-haired, Djerassi is a det­ermined man. Eventually Djerassi got the bound galleys of his book. Diane Middlebrook died of cancer in 2007 and, as Djerassi speaks, her presence grows stronger. Carl Djerassi is a polymath. His latest book, “Four Jews on Parnassus”, is an ima­gined series of debates between Theodor Adorno, Arnold Schönberg, Walter Benjamin and Gershom Scholem, which touches on art, music, philosophy and Jewish identity. The word “polymath” teeters somewhere between Leo­nardo da Vinci and Stephen Fry. “To me, promiscuity is a way of flitting around. Djerassi is right to be suspicious of flitting. Young’s achievements are staggering.

Quorum sensing Quorum sensing is a system of stimulus and response correlated to population density. Many species of bacteria use quorum sensing to coordinate gene expression according to the density of their local population. In similar fashion, some social insects use quorum sensing to determine where to nest. Quorum sensing can function as a decision-making process in any decentralized system, as long as individual components have: (a) a means of assessing the number of other components they interact with and (b) a standard response once a threshold number of components is detected. Bacteria[edit] Some of the best-known examples of quorum sensing come from studies of bacteria. Mechanism[edit] Model of quorum sensing. Examples[edit] Aliivibrio fischeri[edit] Escherichia coli[edit] In the Gram-negative bacteria Escherichia coli (E. coli), cell division may be partially regulated by AI-2-mediated quorum sensing. Salmonella enterica[edit] Pseudomonas aeruginosa[edit] Acinetobacter sp. Aeromonas sp. Archaea[edit]

The Polymath Newsletter, The Polymathic Lifestyle "Since everything is related, I can start anywhere. I choose to start in the Bahamas." Douglas Adams, 1952-2001 One of our founders, like most polymaths, has a large and eclectic personal library. She and her husband are not the most fastidious librarians, so, at times, books get re-shelved in odd places. I tend to socialize with polymaths. According to Hirsch and his Cultural Literacy, every American should 'get' my Nietzsche-Schrodinger reference. Polymathica is a social group for eclectic, lifelong learners, but in a way we are also a nascent cultural viewpoint. However, Polymathica isn't really about that. The short answer is, "I don't know. The dictionary defines a polymath as someone knowledgeable in many subjects. At the core of a polymathic personality is an unrestrained curiosity -- about nearly everything. When we meet polymaths, we hear the same statements over and over. The Internet has been improving matters, but old habits die hard. We hope you decide to join. Return to top