We are perfect Buddha Mind 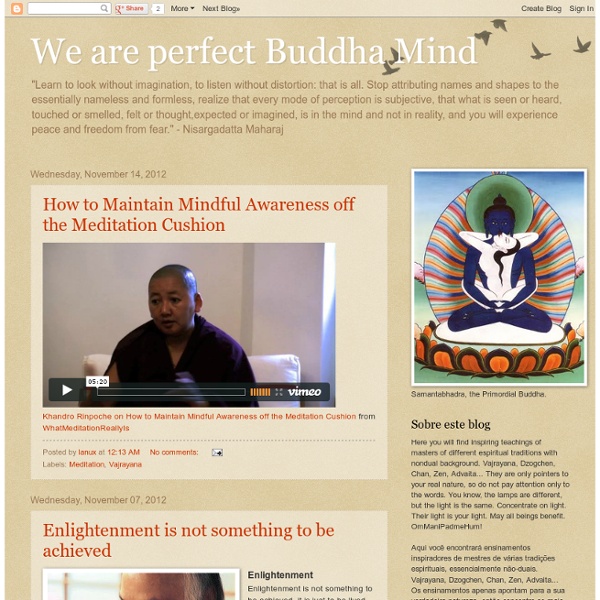 Sustaining the Nature of Mind Our nature does not go or stay anywhere since it is always with us. It does not become more present by going to the mountains and living in a hermitage. Our nature does not change according to circumstances. Therefore, moving about, staying somewhere, going or not going to the mountains – all these are superficial attributes that are not found in the basic nature itself. As you know, Jetsun Milarepa sang many songs, which were very pithy and beneficial to those who listened and understood. Among those songs is one he sang for a woman called Paldabum.

The Tibetan Book of Living and Dying In his foreword to the book, the 14th Dalai Lama says: In this timely book, Sogyal Rinpoche focuses on how to understand the true meaning of life, how to accept death, and how to help the dying, and the dead...Death and dying provide a meeting point between the Tibetan Buddhist and modern scientific traditions. I believe both have a great deal to contribute to each other on the level of understanding and practical benefit. Sogyal Rinpoche is particularly well placed to facilitate this meeting; having been born and brought up in the Tibetan tradition, he has received instructions from some of our greatest Lamas. Having also benefited from a modern education and lived and worked in the West, he has become well acquainted with Western ways of thought. Conception and writing[edit]

Japanese Zen Buddhist Philosophy 1. The Meaning of the Term Zen The designation of this school of the Buddha-Way as Zen, which means sitting meditation, is derived from a transliteration of the Chinese word Chán. Because the Chinese term is in turn a transliteration of the Sanskrit term dhyāna, however, Zen owes its historical origin to early Indian Buddhism, where a deepened state of meditation, called samādhi, was singled out as one of the three components of study a Buddhist was required to master, the other two being an observation of ethical precepts (sīla) and an embodiment of nondiscriminatory wisdom (prajñā). Meditation was picked as the name for this school because the historical Buddha achieved enlightenment (nirvāna) through the practice of meditation.

How to Meditate - Guided Meditation Techniques - Buddhist Meditations The Art of Living: Vipassana Meditation The following text is based upon a talk given by Mr. S.N. Goenka in Berne, Switzerland. Everyone seeks peace and harmony, because this is what we lack in our lives. From time to time we all experience agitation, irritation, dishar­mony. And when we suffer from these miseries, we don't keep them to ourselves; we often distribute them to others as well.

Mindfulness In Plain English A PDF preview from the 20th edition - Click Here Special Offer - 20% Off the latest edition / The 20th Anniversary Edition - eBook or paperback / See Below "Mindfulness in Plain English" has been on UrbanDharma.org a while now for free download, but the edition I posted years ago was the first edition and is now rather dated. Over the last few months I have been in contact with the publisher at Wisdom Publications about M.I.P.E... I have come to understand any money that would have gone to Wisdom Publications (a non-profit publisher of Buddhist books) and the author Ven. Buddhist Television Network (BTN) and The Buddhist Channel inks collaboration for news exchange The Dalai Lama - At Home in Exile by David Turnley - The Digital Journalist Dirck Halstead photographs and videos by Dirck Halstead Categories Photography Video Pages About Dirck

Why I Am Not A Christian, by Bertrand Russell Introductory note: Russell delivered this lecture on March 6, 1927 to the National Secular Society, South London Branch, at Battersea Town Hall. Published in pamphlet form in that same year, the essay subsequently achieved new fame with Paul Edwards' edition of Russell's book, Why I Am Not a Christian and Other Essays ... (1957). As your Chairman has told you, the subject about which I am going to speak to you tonight is "Why I Am Not a Christian."

“A Glimpse of the True Nature and High Potential of Chi power” “I am trying to keep an open mind. Can someone show a video clip of a Taichi Master throwing animals like a big dog or a bear? That will certainly convince me”.- therainbowsurf, top rated You Tube commentator From the YouTube video’s description: The Foundation of I, Inc. Freedom of the Cosmos HolyBooks.com – download free ebooks La Meditazione come Via. Corso di Meditazione Vipassana e Zazen a Bologna