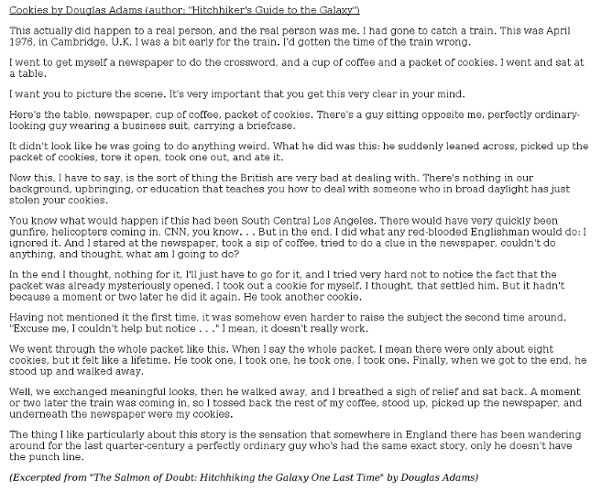 Kids talk Science This page is brought to you by UC Berkeley Parents Network Back to the Jokes & Quotes Collection THE FOLLOWING ARE ALL QUOTES FROM 11 YEAR OLDS' SCIENCE EXAMS: * "Water is composed of two gins, Oxygin and Hydrogin. Oxygin is pure gin. Hydrogin is gin and water." * "Artificial insemination is when the farmer does it to the cow instead of the bull." * "When you breathe, you inspire. When you do not breathe, you expire." * "H20 is hot water, and CO2 is cold water." * "Three kinds of blood vessels are arteries, vanes, and caterpillars." * "Dew is formed on leaves when the sun shines down on them and makes them perspire." * "Mushrooms always grow in damp places and so they look like umbrellas." * "The body consists of three parts - the brainium, the borax and the abominable cavity.

The Most Amazing Paper Sculptures ~ www.popgive.com The Eckmans (Allen and Patty) are the inventors of this process and the Eckman Method® of Cast Paper Sculpture is a trade mark of theirs alone. Since 1988 Patty and Allen have developed and perfected the medium of cast paper far beyond any other artist in the world. Their work is considered to be the premier of the industry by many critics. Allen has a great interest in the Native American Indian partly because his great-great grandmother was a Cherokee. "I really am interested in the Indian's material, physical and spiritual culture and that whole period of our nation's history I find fascinating.

Dirk Gently Dirk Gently (born Svlad Cjelli, also known as Dirk Cjelli) is a fictional character created by Douglas Adams and featured in the books Dirk Gently's Holistic Detective Agency and The Long Dark Tea-Time of the Soul. He is portrayed as a pudgy man who normally wears a heavy old light brown suit, red checked shirt with a green striped tie, long leather coat, red hat and thick metal-rimmed spectacles. "Dirk Gently" is not the character's real name. It is noted early on in the first book that it is a pseudonym for "Svlad Cjelli". Dirk himself states that the name has a "Scottish dagger feel" to it. Holistic detective[edit]

Douglas Adams -  Australia He was a great story writer, who could always make the most trivial things, hilarious. As you can see here in Douglas Adams' depiction of Australia Australia is a very confusing place, taking up a large amount of the Bottom half of the planet. Things People Said: Courtroom Quotations The following quotations are taken from official court records across the nation, showing how funny and embarrassing it is that recorders operate at all times in courts of law, so that even the slightest inadvertence is preserved for posterity. Lawyer: "Was that the same nose you broke as a child?"Witness: "I only have one, you know." Lawyer: "Now, Mrs. Johnson, how was your first marriage terminated?"

www.cs.columbia.edu/sip/sipit/funeral.txt Dear friends, It is with the saddest heart that I pass on the following. Please join me in remembering a great icon. The Pillsbury Doughboy died yesterday of a yeast infection and complications from repeated pokes in the belly. He was 71. THE WIDER VIEW: Three years in the making, it's every boy's dream... the ultimate home-made model aeroplane By Jason Lewis, Mail on Sunday Security Editor Updated: 12:30 GMT, 20 December 2009 It's every schoolboy's dream - from the tiny rows of ammunition to the miniature cockpit canopy gracing this stunning model aircraft. It is an exact replica of a P-51D Mustang which was America's primary long-range fighter plane during the Second World War. And it was made by a retired dentist who used some of his instruments to create it. Built on a 1/16 scale, every part is fully functional, linked by an intricate series of minuscule chains, cables and hinges. Dream machine: The P-51D Mustang took Young C Park, a retired Honolulu dentist, an incredible 6,000 hours to construct

The Meaning of Liff 1984 US edition 1990 US edition Content[edit] The book is a "dictionary of things that there aren't any words for yet".[2] Rather than inventing new words, Adams and Lloyd picked a number of existing place-names and assigned interesting meanings to them;[3] meanings that can be regarded as on the verge of social existence and are ready to become recognisable entities.[4] All the words listed are toponyms and describe common feelings and objects for which there is no current English word. If 'Twilight' Was 10 Times Shorter And 100 Times More Honest On Saturdays, we ask some of our favorite sites on the web to fill in for us. You get to learn about an awesome site you may not have heard of, and we get to watch cartoons in our boxers. Today Rod Hilton, creator of The-Editing-Room.com brings you an abridged version of the screenplay for Twilight, the movie based on Stephanie Meyer's novel.

Hilarious Notes and Signs (40 pics Nov 16/11 Hilarious Notes and Signs (40 pics) Got some free time? Devote it to this cool collection of different signs and notes. why americans should never be allowed to travel I had someone ask for an aisle seats so that his or her hair wouldn't get messed up by being near the window. A client called in inquiring about a package to Hawaii. After going over all the cost info, she asked, "Would it be cheaper to fly to California and then take the train to Hawaii?" I got a call from a woman who wanted to go to Capetown. I started to explain the length of the flight and the passport information when she interrupted me with "I'm not trying to make you look stupid, but Capetown is in Massachusetts. "Without trying to make her look like the stupid one, I calmly explained, "Capecod is in Massachusetts, Capetown is in Africa."