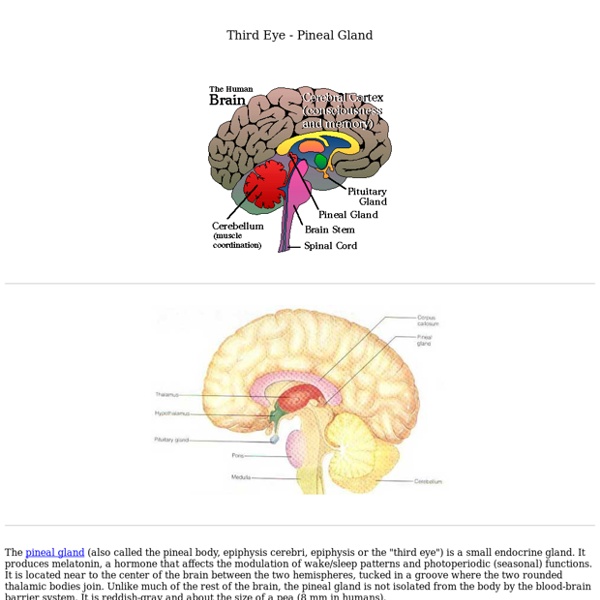 Third Eye - Pineal Gland The pineal gland (also called the pineal body, epiphysis cerebri, epiphysis or the "third eye") is a small endocrine gland. It produces melatonin, a hormone that affects the modulation of wake/sleep patterns and photoperiodic (seasonal) functions. It is located near to the center of the brain between the two hemispheres, tucked in a groove where the two rounded thalamic bodies join. The pineal gland is shaped like a tiny pine cone, hence its name. Pine Cone Pineal Gland Pseudoscience Theories While the physiological function of the pineal gland has been unknown until recent times, mystical traditions and esoteric schools have long known this area in the middle of the brain to be the connecting link between the physical and spiritual worlds. The third eye controls the various bio-rhythms of the body. The pineal gland's location deep in the brain seems to intimate hidden importance. Chakras - Spiraling Wheels or Cones of Energy 12 Around Spiraling Cones of Creation Related:  -

Maithuna, Sacred Sex You are Aphrodite and Adonis as soft flesh endlessly dances on flesh among the brilliant flowers of Mount Olympus. You are the roil and roll of the universe in the never ending movement of creation. You are mastodons in rut, but you are also a point of light beyond manifestation. That point explodes into a million fragments like fireworks in cosmic eternity. The two of you are one but even the one melts into nothingness. Finally, beyond thought, concept or even feeling at all is the indescribable ecstasy as your personality dies. Maithuna is the Sanskrit word for union. Sexual voyaging should take us on journeys to incredible spaces of consciousness and union with many levels of infinite reality, but that takes unlearning much of what religion has promulgated and our parents, in their ignorance, passed on to us. Making love is a way of getting high,perhaps ultimately the only way. So, ‘rule’ number one: it is of primary importance that orgasm is not the most important end to this union.

The French Foreign Legion and Rome « 2guysreadinggibbon's Blog Day 95 – Ken here (T) (DEF v.2, ch.17, pp.620-630) I’m starting late in writing this, and it’s always harder writing on Monday (for Tuesday morning) after a break of a couple of days – so I’m kind of grouchy, and probably missing a lot of interesting tidbits (well, interesting to me) that will be lost in the FLOOD of 2000 pages of history to follow – ah well…. On with Gibbon and his report card on the empire during the reign of Constantine – Gibbon continues with an overview of the new Late Roman military, and the new Late Roman (Diocletian/Constantine) government structure. The Story Military Changes – Expansion and Dilution Government Changes – Great Expansion of Hierarchy The Gaul Ducar in the battle of Lake Trasimeno - Joseph-Noel Sylvestre (1882) - this is an example of incipient chauvinism as France in the late 1800's sought national heroes in their barbarian past (Ducar is presumably a part of the cavalry that accompanied Hannibal as he battled Rome during the 2nd Punic War 217 BCE)

Oxygen chemical element with atomic number 8 Dioxygen is used in cellular respiration and many major classes of organic molecules in living organisms contain oxygen, such as proteins, nucleic acids, carbohydrates, and fats, as do the major constituent inorganic compounds of animal shells, teeth, and bone. Most of the mass of living organisms is oxygen as a component of water, the major constituent of lifeforms. Oxygen is continuously replenished in Earth's atmosphere by photosynthesis, which uses the energy of sunlight to produce oxygen from water and carbon dioxide. Oxygen was isolated by Michael Sendivogius before 1604, but it is commonly believed that the element was discovered independently by Carl Wilhelm Scheele, in Uppsala, in 1773 or earlier, and Joseph Priestley in Wiltshire, in 1774. Etymology The name oxygen was coined in 1777 by Antoine Lavoisier, whose experiments with oxygen helped to discredit the then-popular phlogiston theory of combustion and corrosion. History Discovery Storage

SPIRITUAL SEX Here is your chance to spiritualize your sex life or to make your spiritual life more sexy by Walter Last Sexuality is closely related to spirituality in several ways. The idea of celibacy for priests, nuns and monks is to spiritualize sexual energies as in meditation, rituals and other devotional practices. There are various yoga and meditation techniques to transform sexual energy into kundalini or spiritual energy by oneself. Commonly esoteric teachings advise to curtail sexual activity and portray abstinence as an ideal in order to retain sexual energies for internal development. Furthermore, most of those with a chronic disease, and especially cancer, are emotionally rather fragile, and benefit greatly from a close-bonding loving relationship. What many individuals miss even more than sex is touching and hugging. Karezza I believe that regularly radiating love, and feel being loved, greatly helps to prevent and overcome cancer and other diseases. Meditative Sex Tantric Sex Sexual

December 21 2012 Predictions – The 2012 End of The World ? Fillmore Fulfilled: Pineal Gland « Back to Fillmore Fulfilled PINEAL GLAND (This drawing is a medial view of the right cerebral hemisphere; to the left is to the front of the cerebrum.) Charles Fillmore located the power of faith in the center of the head in the pineal gland. As with most of his other locations, Fillmore gave little or no explanation as to why he placed faith at the pineal gland. Therefore, we are left to view his designation from historical and other perspectives. In Eastern literature, the pineal gland was said to be the organ that correlated with the crown chakra. Medically, in Fillmore's day, little was known about the pineal gland and its function. It was not until the 1980s that scientists began to document that the pineal is an endocrine gland whose primary hormone, melatonin, helps to regulate the sleep-wake cycle. Thus, melatonin helps to regulate whether our cerebrum is in its conscious, awake state or mode, or in its subconscious, sleep state or mode. Permalink

List of martial arts There are a large number of distinct styles and schools of martial arts. Sometimes, schools or styles are introduced by individual teachers or masters, or as a brand name by a specific gym. Martial arts can be grouped by type or focus, or alternatively by regional origin. For hybrid martial arts, as they originated from the late 19th century and especially after 1950, it may be impossible to identify unique or predominant regional origins. A large portion of traditional martial arts can be categorized as folk wrestling (see the separate article), although in some cases a folk wrestling style and a modern combat sport may overlap or become indistinguishable from each other once the sport has been regulated. Africa[edit] Styles of stickfighting Folk wrestling Bare knuckle boxing Others Engolo (Angola) The Americas[edit] Mixed martial arts Barbados Bajan stick licking Bolivia Tinku Brazil Canada; Colombia Cuba El Juego de Maní Peru Bakom/Vacon Trinidad and Tobago Calinda United States Venezuela Asia[edit] China

The Ascension Temple of Purification Red blood cell In humans, mature red blood cells are flexible and oval biconcave disks. They lack a cell nucleus and most organelles, in order to accommodate maximum space for hemoglobin; they can be viewed as sacks of hemoglobin, with a plasma membrane as the sack. Approximately 2.4 million new erythrocytes are produced per second in human adults.[3] The cells develop in the bone marrow and circulate for about 100–120 days in the body before their components are recycled by macrophages. Packed red blood cells (pRBC) are red blood cells that have been donated, processed, and stored in a blood bank for blood transfusion. Structure Vertebrates There is an immense size variation in vertebrate red blood cells, as well as a correlation between cell and nucleus size. Mature red blood cells of birds have a nucleus, however in the blood of adult females of penguin Pygoscelis papua enucleated red blood cells (B) have been observed, but with very low frequency. Mammals Scanning electron micrograph of blood cells.

Marijuana Smokers Breathe Easy Says The University of Alabama As of January 10, 2012, a new study has been published in the Journal of the American Medical Association exonerating marijuana from the bad reputation of being as harmful to your lungs when smoked as tobacco cigarettes. Researchers at the University of California San Francisco and the University of Alabama at Birmingham completed a twenty-year study between 1986 and 2006 on over 5,000 adults over the age of 21 in four American cities. Study co-author Dr. Lung function was determined by testing the volume of expiration in the first second of exhaling and the amount of air a person can force out in one second after taking a deep breath. Basically, though these studies do not depict what the consequences are of inhaling marijuana smoke, their findings suggest that occasional use of marijuana may not be linked with unfavorable consequences on pulmonary function.

Reptilian Research Page Don Juan, the Mexican Yaqui Indian shaman, tells Carlos Castaneda the following: "We have a predator that came from the depths of the cosmos and took over the rule of our lives. Human beings are its prisoners. The Predator is our lord and master. It has rendered us docile, helpless. "This was an energetic fact for the sorcerers of ancient Mexico ... "No, no, no, no," [Carlos replies] "This is absurd don Juan. "Why not?" "'But how can they do this, don Juan? "'No, they don't do it that way. stupendous, of course, from the point of view of a fighting strategist. "I know that even though you have never suffered hunger... you have food anxiety, which is none other than the anxiety of the predator who fears that any moment now its manoeuvre is going to be uncovered and food is going to be denied. "The sorcerers of ancient Mexico were quite ill at ease with the idea of when [the predator] made its appearance on Earth. Castaneda, 1998