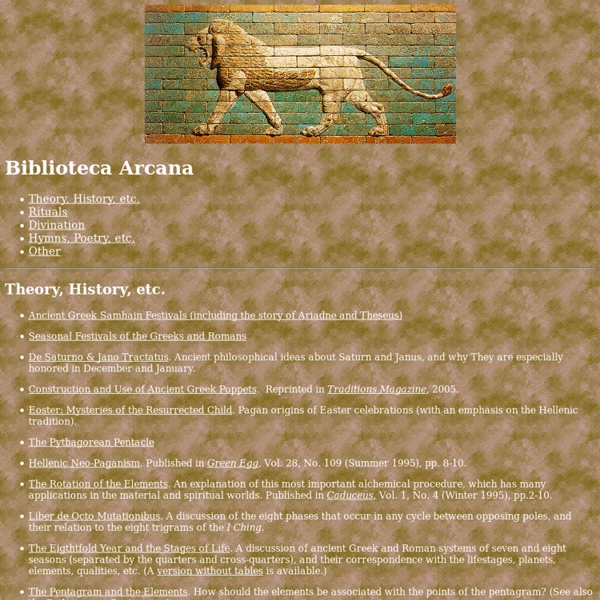 The Egyptian Coffin Texts 1: Texts of Spells 1-75 | The Oriental Institute of the University of Chicago Download Terms of Use The Coffin Texts form the missing link between the Pyramid Texts and the Book of the Dead. These texts are an expression of the Egyptian desire for immortality and the deep influence of the mortuary religion of the pharaohs. This volume presents careful copies and comparison of all available duplicate texts of Spells 1-75. Oriental Institute Publications, Volume 34 Chicago: University of Chicago Press, 1935 Pp. xix + 405 Out of Print Random.org - True Random Number Service ANCIENT EGYPT : The Pyramid Texts in the tomb of Pharaoh Wenis, Unis or Unas 2. The rise of henotheism. "Men hide, the gods fly away." King Unas (Utt.302 - antechamber, North Wall) At the start of Dynastic times (ca. 3000 BCE), the religious beliefs of the Egyptians were contextual, local & relative to social class. From the IIIth Dynasty (ca. 2670 BCE), initiating the Old Kingdom (ca. 2670 - 2205 BCE), the royal ritual issued a new emphasis on the single, Solar creator-god Re, replacing the traditional balance between Horus and Seth. The architectural wonders of Pharaohs Djoser (ca. 2654 - 2635 BCE), Snofru (ca. 2600 - 2571 BCE) and Khufu (ca. 2571 - 2548 BCE) evidence this new royal theology, focusing on the divine king while in power (cf. as Osiris & Horus in the Sed-festival) and as Son of Re in the afterlife. The pyramid is a stairway to heaven, a rising as given by , 041, the double stairway, a determinative indicating "ascent" and "high place" (cf. the Step Pyramid of Djoser). Because of this emphasis on Re, a constellational henotheism ensued. 3. 4. 5. 6.

SubSite - Start Coffin Texts Middle Kingdom sarcophagus with the Coffin Texts painted on its panels As the modern name of this collection of some 1,185 spells implies, they were mostly inscribed on Middle Kingdom coffins. They were also sometimes written on tomb walls, stelae, canopic chests, papyri and mummy masks. Due to the limited writing surfaces of some of these objects, the spells were often abbreviated, giving rise to long and short versions, some of which were later copied in the Book of the Dead.[2] Content[edit] In contrast to the Pyramid Texts which focus on the celestial realm, the coffin texts emphasize the subterranean elements of the afterlife ruled by the deity Osiris, in a place called the Duat. Examples[edit] Coffin text 1130 is a speech by the sun god Ra, who says: Hail in peace! I made the four winds, that every man might breathe in his time.. I made the great inundation, that the humble might benefit by it like the great... I made every man like his fellow; and I did not command that they do wrong.

Orgone Biophysical Research Lab: Orgonomy &amp; Wilhelm Reich Dark Books Magic Library The Anatomy of a Search Engine Sergey Brin and Lawrence Page {sergey, page}@cs.stanford.edu Computer Science Department, Stanford University, Stanford, CA 94305 Abstract In this paper, we present Google, a prototype of a large-scale search engine which makes heavy use of the structure present in hypertext. 1. (Note: There are two versions of this paper -- a longer full version and a shorter printed version. 1.1 Web Search Engines -- Scaling Up: 1994 - 2000 Search engine technology has had to scale dramatically to keep up with the growth of the web. 1.2. Creating a search engine which scales even to today's web presents many challenges. These tasks are becoming increasingly difficult as the Web grows. 1.3 Design Goals 1.3.1 Improved Search Quality Our main goal is to improve the quality of web search engines. 1.3.2 Academic Search Engine Research Aside from tremendous growth, the Web has also become increasingly commercial over time. 2. 2.1 PageRank: Bringing Order to the Web 2.1.1 Description of PageRank Calculation Vitae

Magick Circle Welcome to this, the seventy-fourth of our on-line catalogs, which is another of our special lists devoted to books by and about Aleister Crowley. The catalog is divided into four subsections, the first of which is made up of a select group of new books, comprising The Mystical & Magical System of the A.'. A.'. and 776 1/2 Tables of Correspondences for Practical Ceremonial, both by James A. Eshelman, Aleister Crowley. The Fire and the Force by Don Webb, copies of the leather bound limited edition of Jane Wolfe: The Cefalu Diaries 1920-1923, edited by David Shoemaker, and signed copies of the revised second edition of James & Nancy Wasserman's, To Perfect This Feast. The second section is devoted to Rare and Unusual Books and Ephemera relating to Crowley. The third section of the catalog comprises a selection of works - some signed - that were written and/or published by J.

The Surrealism Server Surrealism began primarily as a literary movement based on radical ideas gaining momentum in the 1920s. Naturally, where words flow, images swim congruently, and it is perhaps for the many paintings and 'graphic works' associated with the movement that Surrealism has received much of its notoriety. However, judge the basis of Surrealism not by what has been and yet remains to be written about the movement, but by what has been done and yet remains to be accomplished using the mechanisms inherent in the Vice of Surrealism. Jardin Mécanisme Three minutes, twenty-six seconds, to deviously imply other sentiments surround with forceful persuasion.. Oh, yes, Oh, Sorrel bullMoose!

Codex Gigas The Codex Gigas or the Devil’s Bible at the National Library in Stockholm is famous for two features. First, it is reputed to be the biggest surviving European manuscript. (Codex Gigas means ‘giant book’.) Secondly, it contains a large, full page portrait of the Devil. This site contains a digitised version of every page of the manuscript as well as commentaries on its history, texts, script, initials and decoration. The Highlights contain a selection of images from the manuscript. The original manuscript is no longer on display for the general public. Codex Gigas digital images by Per B. Contact: codexgigas@kb.se In citations, provide shelf numbers and indicate that the National Library of Sweden is the source of these materials.