The Improbability of God 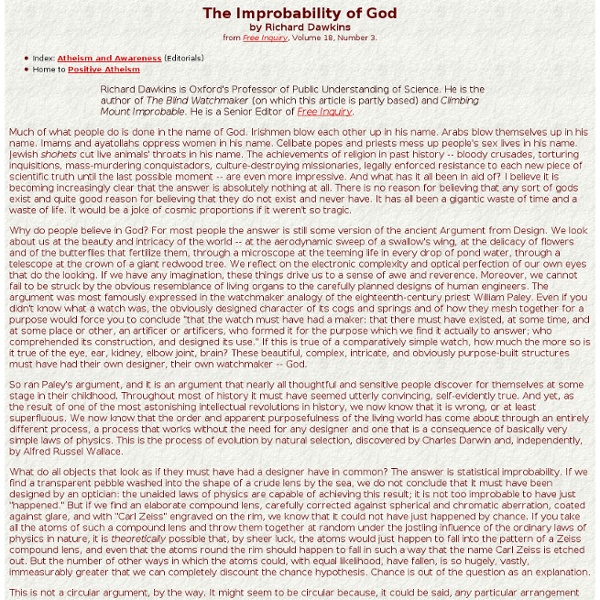 The Improbability of God by Richard Dawkins from Free Inquiry, Volume 18, Number 3. Much of what people do is done in the name of God. Irishmen blow each other up in his name. Why do people believe in God? So ran Paley's argument, and it is an argument that nearly all thoughtful and sensitive people discover for themselves at some stage in their childhood. What do all objects that look as if they must have had a designer have in common? This is not a circular argument, by the way. Of all the trillions of different ways of putting together the atoms of a telescope, only a minority would actually work in some useful way. We can safely conclude that living bodies are billions of times too complicated -- too statistically improbable -- to have come into being by sheer chance. For instance, it is theoretically possible for an eye to spring into being, in a single lucky step, from nothing: from bare skin, let's say. Eyes and wings cannot spring into existence in a single step. Return to Top Related:  Ateismo e religioni comparate

Jesus and Hell : Interfaith Benevolent God did not create Hell. There is no Hell in a literal sense, at least not as a physical place of dwelling full of fire and brimstone and torture – as the lasting mediaeval imagery would have us believe. Hell requires a closer scrutiny of the garbled Greek influences riding upon Jewish philosophy to determine its inferred meaning. Sheol is the word used throughout the Old Testament that is usually translated as “Hell”, but the word itself relates simply to death and the grave – or perhaps more precisely, a grave-pit – that’s where the notion of Hell being “beneath” – a form of underworld – comes from – bodies are buried beneath us within the earth, and conjoined with the primal notion of Heaven and God being literally among or above “the heavens”. Yet even death is not seen as separation from YHWH: cf Job 11:8, 26:6, Jonah 2:2. However, Sheol, like the word “Hell” itself, can be used figuratively. In the New Testament, however, the emphasis begins to broaden.

Main Page - FreeThoughtPedia A. J. Ayer "Language Truth Logic and God," 1946 Language, Truth, Logic, and God The following excerpt was published in Language Truth and Logic (1946). by A. J. he criterion which we use to test the genuineness of apparent statements of fact is the criterion of verifiability. The sentence expressing it may be emotionally significant to him; but it is not literally significant. A simple and familiar example of such a proposition is the proposition that there are mountains on the farther side of the moon. It should now be clear that the only information which we can legitimately derive from the study of our aesthetic and moral experiences is information about our own mental and physical make-up. This mention of God brings us to the question of the possibility of religious knowledge. What is not so generally recognised is that there can be no way of proving that the existence of a god, such as the God of Chrisianity, is even probable. Thus we offer the theist the same comfort as we gave to the moralist.

Born believers: How your brain creates God From New Scientist magazine 04 February 2009 by Michael Brooks Read our related editorial:The credit crunch could be a boon for irrational belief. WHILE many institutions collapsed during the Great Depression that began in 1929, one kind did rather well. This anomaly was documented in the early 1970s, but only now is science beginning to tell us why. Religious ideas are common to all cultures: like language and music, they seem to be part of what it is to be human. The origin of religious belief is something of a mystery, but in recent years scientists have started to make suggestions. The religion-as-an-adaptation theory doesn't wash with everybody, however. An alternative being put forward by Atran and others is that religion emerges as a natural by-product of the way the human mind works. That's not to say that the human brain has a "god module" in the same way that it has a language module that evolved specifically for acquiring language. So how does the brain conjure up gods?

The World Without Forms – GODS & RADICALS I said to a friend, we see the darkness, and some go in. It is the Abyss. We have to find out what is there, to find out if there is meaning. And we see only the abyss. And some go mad. And some never return. Terror often greets the far-off glances on the faces of those who return from the Abyss. Like the ones who ‘walk away from Omelas,’ they did not know to where they were going, only somewhere not-here, not the streets full of opulent wealth and the joyous cries of liberation made possible by a founding horror. It is their own fire, and it is a fire others are right to fear. I am what some might call an Egoist. It is generally easier to list what I reject (for those of you checking-off boxes on mental clipboards) than it is to begin the litany of what I embrace. I will tell you what I do not like. Here, though, I should remind you: “Fascism” means nothing at all. Max Stirner called these ideas ‘spooks.’ Consider the World Trade Center attacks in 2001 in the United States. Like this: