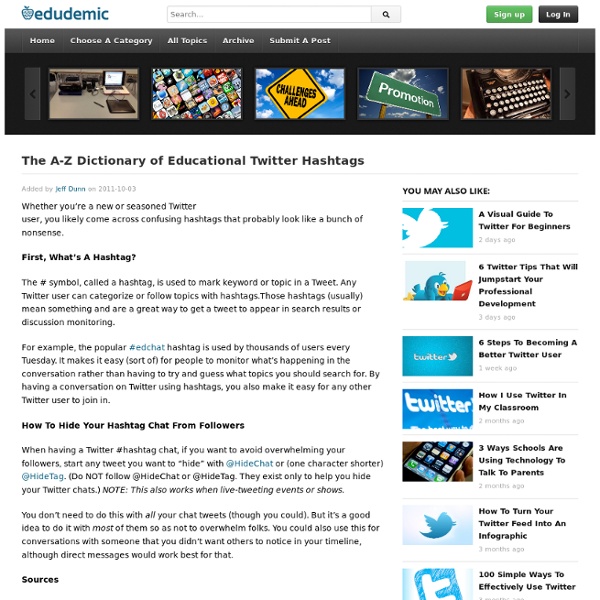 Whether you’re a new or seasoned Twitter user, you likely come across confusing hashtags that probably look like a bunch of nonsense. First, What’s A Hashtag? The # symbol, called a hashtag, is used to mark keyword or topic in a Tweet. Any Twitter user can categorize or follow topics with hashtags.Those hashtags (usually) mean something and are a great way to get a tweet to appear in search results or discussion monitoring. For example, the popular #edchat hashtag is used by thousands of users every Tuesday. It makes it easy (sort of) for people to monitor what’s happening in the conversation rather than having to try and guess what topics you should search for. How To Hide Your Hashtag Chat From Followers When having a Twitter #hashtag chat, if you want to avoid overwhelming your followers, start any tweet you want to “hide” with @HideChat or (one character shorter) @HideTag . You don’t need to do this with all your chat tweets (though you could). Sources The Most Popular Hashtags

7 Pillars Of Digital Leadership In Education 7 Pillars Of Digital Leadership In Education by Eric Sheninger, Principal at New Milford High School in New Jersey As schools change leadership must as well. HOW TO: Get the Most Out of Twitter #Hashtags One of the most complex features of Twitter for new users to understand is the hashtag, a topic with a hash symbol ("#") at the start to identify it. Twitter hashtags like #followfriday help spread information on Twitter while also helping to organize it. The hashtag is a favorite tool of conferences and event organizers, but it's also a way for Twitter users to organize themselves: if everyone agrees to append a certain hashtag to tweets about a topic, it becomes easier to find that topic in search, and more likely the topic will appear in Twitter's Trending Topics. So how do you disseminate and make sense of all this hashtag madness? By going through the art of the hashtag step-by-step, of course. This short guide details how to identify, track, use, and organize hashtags in an efficient and useful way.

Go Back in Time with 12 World History Apps History is one of those subjects where it is easy to get your students engaged once they have connected with the narrative. Here are a couple of Apps that will help your students jump right into the era that you are studying. Obviously we can't cover every area of historical study but these apps give you an idea of some of the tools available on the iPad.

Can Facebook Get You a Job? [INFOGRAPHIC] In answer to the question above, approximately 18,400,000 Americans say yes, they got their current job through Facebook. Though Zuck's platform ranks #1, Twitter and LinkedIn don't have shabby numbers either — 8 million and 10.2 million Americans, respectively, have gotten their jobs through social platforms. Judging from our Job Search Series, it should come as no surprise that being socially savvy pays off in the job hunt for two reasons — it helps you network, and it's a highly marketable strength in your skill set, given all the openings in the digital space. So, it's about time you spruce up those social profiles and start networking.

Ultimate Guide to Twitter Hashtags What is a Twitter hashtag? A hashtag is a way to unite global Tweets around some particular topic. Basically, these are tags that that help those who seek similar content discover your Tweets. According to the official source: What do students entering HE expect from digital technologies? When we come across new technologies or digital platforms for the first time in further and higher education (HE), how do we decide what the technology does or should do, and how we can use it to help us? In the digital student project we have been investigating incoming students’ expectations of the digital environment in HE. Institutions will be working to meet or manage expectations as hundreds of thousands of new students arrive in September but it’s no small task to build a picture of students’ hopes and aspirations when there are modules to rewrite and technology to update over the summer. Clearly experiences of digital technology while at school will be a major influence, so we have looked closely at the sort of technologies schools own and how they use it.

The Top 100 Twitter Tools of 2012 (Categorized) This post is #9 in DailyTekk’s famous Top 100 series which explores the best startups, gadgets, apps, websites and services in a given category. Total items listed: 115. Time to compile: 8+ hours. Follow @DailyTekk on Twitter to make sure you don’t miss a week! Temporarily Copy Offline YouTube Videos to Your iPad <div class="greet_block wpgb_cornered"><div class="greet_text"><div class="greet_image"><a href=" rel="nofollow"><img src=" alt="WP Greet Box icon"/></a></div>Hello there! If you are new here, you might want to <a href=" rel="nofollow"><strong>subscribe to the RSS feed</strong></a> for updates on this topic.<div style="clear:both"></div></div></div> Even if YouTube is unblocked in your school for teacher access, it can be challenging to share YouTube videos with students during class.