Croque Madame Egg Cups Are an Easier Recipe for French Food. Cracking open a beer or shaking a cocktail at home might be one of the most relaxing ways to spend a weekend evening, but that doesn’t mean you should resort to a boring bag of pretzels for the accompanying snack. 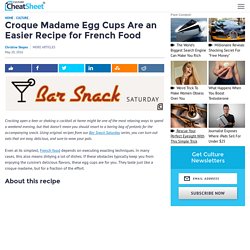 Using original recipes from our Bar Snack Saturday series, you can turn out eats that are easy, delicious, and sure to wow your pals. Even at its simplest, French food depends on executing exacting techniques. In many cases, this also means dirtying a lot of dishes. If these obstacles typically keep you from enjoying the cuisine’s delicious flavors, these egg cups are for you.

They taste just like a croque madame, but for a fraction of the effort. About this recipe Croque madame egg cups | Christine Skopec/Culture Cheat Sheet While a traditional croque madame isn’t exactly hard, making the sauce, assembling, broiling, and frying eggs is a lot of effort for a sandwich. To form the base of each egg cup, choose a soft white bread. Croque Madame Egg Cups Ingredients: Paris attacks: What happened on the night. The French Revolution: Crash Course World History #29. Now it's time to look at how the Advanced Placement exam might address this topic. 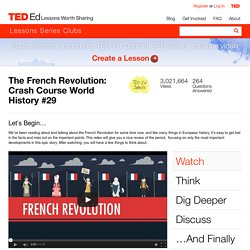 Advanced Placement Free-Response Questions require a certain amount of knowledge about a topic, but they also require you to think critically about the knowledge you have and to create something new out of it. Let's look at an example from 2008:Analyze the ways in which the events of the French Revolution and Napoleonic period (1789-1815) led people to challenge Enlightenment views of society, politics, and human nature. A few things to understand about this question: 1. A Guide to the French Revolution. 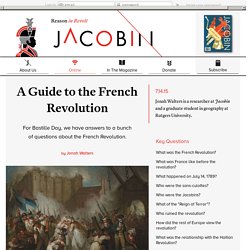 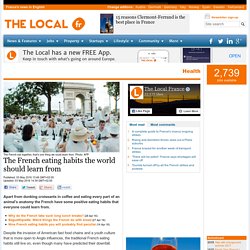 Photo: AFP Apart from dunking croissants in coffee and eating every part of an animal's anatomy the French have some positive eating habits that everyone could learn from. Despite the invasion of American fast food chains and a youth culture that is more open to Anglo influences, the traditional French eating habits still live on, even though many have predicted their downfall. France is still a country where eating is seen as pleasure rather than just giving the body what it needs to get through the day. As a result the French have a different way of doing things than many other countries. Fixed meal times and no snacks The French have always stuck to three meals a day and generally don’t do food outside these set meals. For the French it's OK to be hungry between these three meal times and it doesn't mean raiding the fridge or going out to buy chocolate. (Photo: Malcolm Slaney/Flickr) Lunch more important than dinner. French Culture: Customs & Traditions.

Most people associate French culture with Paris, which is a center of fashion, cuisine, art and architecture, but life outside of the City of Lights is very different and varies by region. France doesn't just have different cultures; the word "culture" actually comes from France. "'Culture' derives from the same French term, which in turn derives from the Latin colere, meaning to tend to the earth and grow, cultivation and nurture," Cristina De Rossi, an anthropologist at Barnet and Southgate College in London, told Live Science. Historically, French culture was influenced by Celtic and Gallo-Roman cultures as well as the Franks, a Germanic tribe. Fall of France. By May 1940, Europe had been at war for nine months. 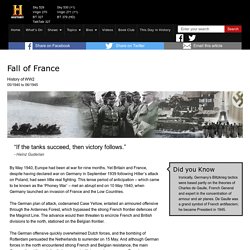 Yet Britain and France, despite having declared war on Germany in September 1939 following Hitler’s attack on Poland, had seen little real fighting. World War II (1939–1945): The Invasion of France. Events May 10, 1940 Germany begins invasions of Belgium, the Netherlands, and France May 13 French and British troops move into Belgium but are trapped between German armies May 14 Luftwaffe bombs central Rotterdam; Netherlands surrenders to Germany. 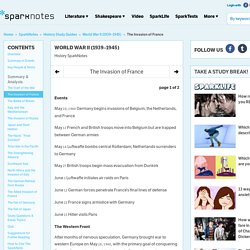 Principal Dates and Time Line of the French Revolution. US warns of possible Europe attacks, no specific threat. WASHINGTON, May 31 (Reuters) - The United States warned its citizens on Tuesday of possible summer terrorist attacks in Europe, saying targets could include the European soccer championship in France, although a U.S. official said there was no specific threat information. 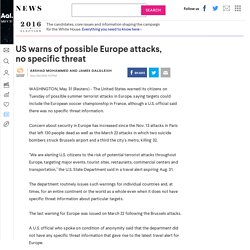 Concern about security in Europe has increased since the Nov. 13 attacks in Paris that left 130 people dead as well as the March 22 attacks in which two suicide bombers struck Brussels airport and a third the city's metro, killing 32. "We are alerting U.S. citizens to the risk of potential terrorist attacks throughout Europe, targeting major events, tourist sites, restaurants, commercial centers and transportation," the U.S. State Department said in a travel alert expiring Aug. 31. The department routinely issues such warnings for individual countries and, at times, for an entire continent or the world as a whole even when it does not have specific threat information about particular targets. French cuisine. Cuisine originating from France French cuisine consists of the cooking traditions and practices from France. 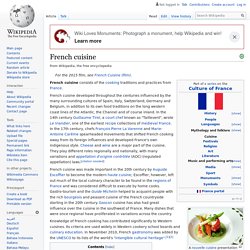 French cuisine was made important in the 20th century by Auguste Escoffier to become the modern haute cuisine; Escoffier, however, left out much of the local culinary character to be found in the regions of France and was considered difficult to execute by home cooks. Gastro-tourism and the Guide Michelin helped to acquaint people with the rich bourgeois and peasant cuisine of the French countryside starting in the 20th century. Gascon cuisine has also had great influence over the cuisine in the southwest of France.

Many dishes that were once regional have proliferated in variations across the country. Knowledge of French cooking has contributed significantly to Western cuisines. Contents History[edit] Middle Ages[edit] In French medieval cuisine, banquets were common among the aristocracy. Visual display was prized. Timeline of France in World War 2. There are a total of (131) entries in the Timeline of France in World War 2. 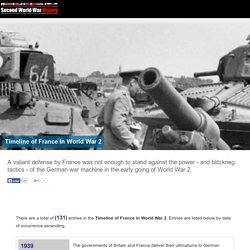