Lesson HOW TO - Solve Trigonometric equations 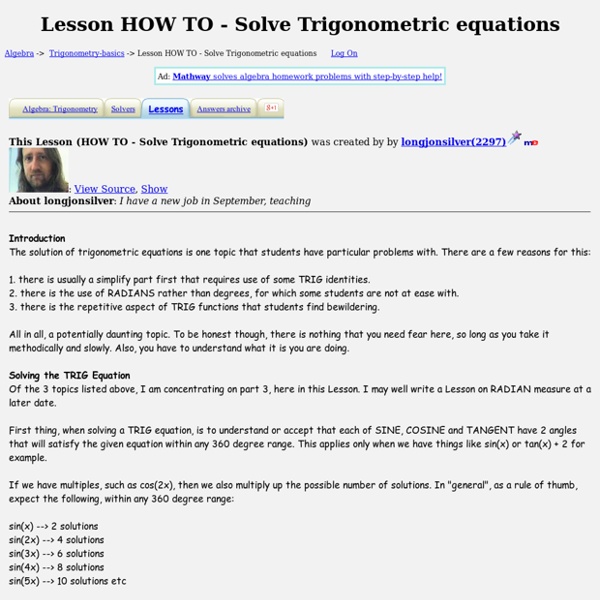 Introduction The solution of trigonometric equations is one topic that students have particular problems with. There are a few reasons for this: 1. there is usually a simplify part first that requires use of some TRIG identities. 2. there is the use of RADIANS rather than degrees, for which some students are not at ease with. 3. there is the repetitive aspect of TRIG functions that students find bewildering. All in all, a potentially daunting topic. To be honest though, there is nothing that you need fear here, so long as you take it methodically and slowly. Also, you have to understand what it is you are doing. Solving the TRIG Equation Of the 3 topics listed above, I am concentrating on part 3, here in this Lesson. First thing, when solving a TRIG equation, is to understand or accept that each of SINE, COSINE and TANGENT have 2 angles that will satisfy the given equation within any 360 degree range. Basics This is difficult to explain, with no real picture to use, so bear with me. Done!

Amplitude and Period Amplitude and Period Learning Objective(s) · Understand amplitude and period. · Graph the sine function with changes in amplitude and period. SOLVING TRIGONOMETRIC EQUATIONS Note: If you would like a review of trigonometry, click on trigonometry. Example 1: Solve for x in the following equation. There are an infinite number of solutions to this problem. First isolate the cosine term. To solve for x, we have to isolate x. Sine, Cosine and Tangent in Four Quadrants Sine, Cosine and Tangent The three main functions in trigonometry are Sine, Cosine and Tangent. They are easy to calculate: Graphing Trigonometric Functions Graphing Trigonometric Functions (page 1 of 3) Sections: Introduction, Examples with amplitude and vertical shift, Example with phase shift You've already learned the basic trig graphs. But just as you could make the basic quadratic x2, more complicated, such as –(x + 5)2 – 3, so also trig graphs can be made more complicated.

Amplitude, Period, Phase Shift and Frequency Some functions (like Sine and Cosine) repeat forever and are called Periodic Functions. The Period is the length from one peak to the next (or from any point to the next matching point): The Amplitude is the height from the center line to the peak (or to the trough). Or we can measure the height from highest to lowest points and divide that by 2. The Phase Shift is how far the function is horizontally to the right of the usual position. The Vertical Shift is how far the function is vertically from the usual position. Algebra/Trig Review - Solving Trig Equations Solve the following trig equations. For those without intervals listed find ALL possible solutions. For those with intervals listed find only the solutions that fall in those intervals. There’s not much to do with this one. Just divide both sides by 2 and then go to the unit circle. So, we are looking for all the values of t for which cosine will have the value of

4. Graphs of tan, cot, sec and csc by M. Bourne The graphs of tanx, cotx, secx and cscx are not as common as the sine and cosine curves that we met earlier in this chapter. However, they do occur in engineering and science problems. Algebra - Symmetry Example 1 Determine the symmetry of each of the following equations. (a) [Solution] The Graphs of Sine and Cosine A sine wave, or sinusoid, is the graph of the sine function in trigonometry. A sinusoid is the name given to any curve that can be written in the form (A and B are positive). Sinusoids are considered to be the general form of the sine function. In addition to mathematics, sinusoidal functions occur in other fields of study such as science and engineering. This function also occurs in nature as seen in ocean waves, sound waves and light waves.