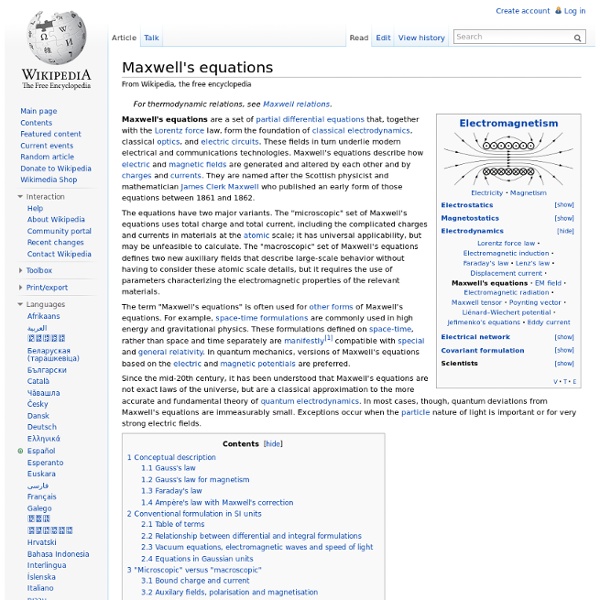 Maxwell's equations are a set of partial differential equations that, together with the Lorentz force law, form the foundation of classical electrodynamics, classical optics, and electric circuits. These fields in turn underlie modern electrical and communications technologies. Maxwell's equations describe how electric and magnetic fields are generated and altered by each other and by charges and currents. They are named after the Scottish physicist and mathematician James Clerk Maxwell, who published an early form of those equations between 1861 and 1862. The equations have two major variants. The "microscopic" set of Maxwell's equations uses total charge and total current, including the complicated charges and currents in materials at the atomic scale; it has universal applicability but may be unfeasible to calculate. The term "Maxwell's equations" is often used for other forms of Maxwell's equations. Formulation in terms of electric and magnetic fields[edit] Flux and divergence[edit]

Weber (unit) The weber is named after the German physicist Wilhelm Eduard Weber (1804–1891). The weber may be defined in terms of Faraday's law, which relates a changing magnetic flux through a loop to the electric field around the loop. A change in flux of one weber per second will induce an electromotive force of one volt (produce an electric potential difference of one volt across two open-circuited terminals). Officially, Weber (unit of magnetic flux) — The weber is the magnetic flux which, linking a circuit of one turn, would produce in it an electromotive force of 1 volt if it were reduced to zero at a uniform rate in 1 second.[2] The weber is commonly expressed in a multitude of other units: This SI unit is named after Wilhelm Eduard Weber. It was not until 1927 that TC1 dealt with the study of various outstanding problems concerning electrical and magnetic quantities and units. Also in 1935, TC1 passed responsibility for "electric and magnetic magnitudes and units" to the new TC24.

Inductance In electromagnetism and electronics, inductance is the property of an electrical conductor by which a change in current flowing through it induces an electromotive force in both the conductor itself[1] and in any nearby conductors by mutual inductance.[1] These effects are derived from two fundamental observations of physics: a steady current creates a steady magnetic field described by Oersted's law,[2] and a time-varying magnetic field induces an electromotive force in nearby conductors, which is described by Faraday's law of induction.[3] According to Lenz's law,[4] a changing electric current through a circuit that contains inductance induces a proportional voltage, which opposes the change in current (self-inductance). The varying field in this circuit may also induce an e.m.f. in neighbouring circuits (mutual inductance). Circuit analysis[edit] An electronic component that is intended to add inductance to a circuit is called an inductor. Here, inductance L is a symmetric matrix. and

Moving magnet and conductor problem Conductor moving in a magnetic field. The moving magnet and conductor problem is a famous thought experiment, originating in the 19th century, concerning the intersection of classical electromagnetism and special relativity. In it, the current in a conductor moving with constant velocity, v, with respect to a magnet is calculated in the frame of reference of the magnet and in the frame of reference of the conductor. This problem, along with the Fizeau experiment, the aberration of light, and more indirectly the negative aether drift tests such as the Michelson–Morley experiment, formed the basis of Einstein's development of the theory of relativity.[2] Introduction[edit] Einstein's 1905 paper that introduced the world to relativity opens with a description of the magnet/conductor problem.[1] It is known that Maxwell's electrodynamics – as usually understood at the present time – when applied to moving bodies, leads to asymmetries which do not appear to be inherent in the phenomena. where .

Aharonov–Bohm effect Werner Ehrenberg and Raymond E. Siday first predicted the effect in 1949,[3] and similar effects were later published by Yakir Aharonov and David Bohm in 1959.[4] After publication of the 1959 paper, Bohm was informed of Ehrenberg and Siday's work, which was acknowledged and credited in Bohm and Aharonov's subsequent 1961 paper.[5][6] Subsequently, the effect was confirmed experimentally by several authors; a general review can be found in Peshkin and Tonomura (1989).[7] Significance[edit] The Aharonov–Bohm effect is important conceptually because it bears on three issues apparent in the recasting of (Maxwell's) classical electromagnetic theory as a gauge theory, which before the advent of quantum mechanics could be argued to be a mathematical reformulation with no physical consequences. The Aharonov–Bohm thought experiments and their experimental realization imply that the issues were not just philosophical. The three issues are: Potentials vs. fields[edit] Magnetic solenoid effect[edit] .