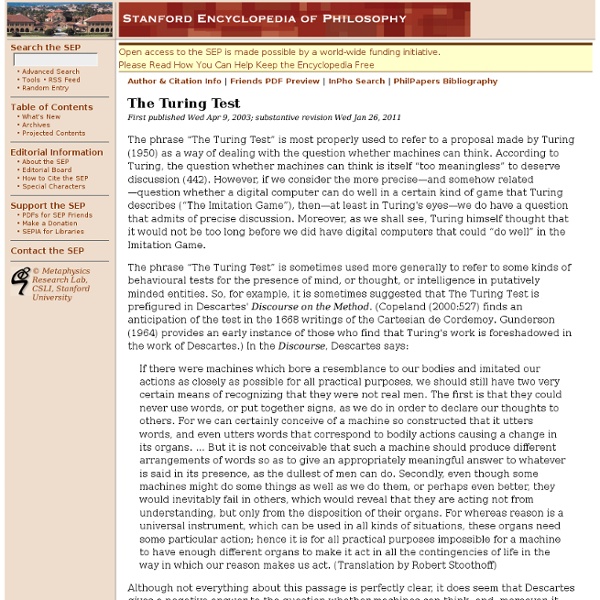 The Chinese Room Argument 1. Overview Work in Artificial Intelligence (AI) has produced computer programs that can beat the world chess champion and defeat the best human players on the television quiz show Jeopardy. AI has also produced programs with which one can converse in natural language, including Apple's Siri. Our experience shows that playing chess or Jeopardy, and carrying on a conversation, are activities that require understanding and intelligence. Does computer prowess at challenging games and conversation then show that computers can understand and be intelligent? Searle argues that a good way to test a theory of mind, say a theory that holds that understanding can be created by doing such and such, is to imagine what it would be like to do what the theory says would create understanding. Imagine a native English speaker who knows no Chinese locked in a room full of boxes of Chinese symbols (a data base) together with a book of instructions for manipulating the symbols (the program). 2. 17. 3. 4.

BOINC: compute for science BOINC is a program that lets you donate your idle computer time to science projects like SETI@home, Climateprediction.net, Rosetta@home, World Community Grid, and many others. After installing BOINC on your computer, you can connect it to as many of these projects as you like. You may run this software on a computer only if you own the computer or have the permission of its owner. Tested on the current Ubuntu distribution; may work on others. If available, we recommend that you install a distribution-specific package instead. After downloading BOINC you must install it: typically this means double-clicking on the file icon when the download is finished. System requirements · Release notes · Help · All versions · Version history · GPU computing

Stanford Encyclopedia of Philosophy Future proof » Tim’s laptop service manuals Have you come to this webpage looking for Toshiba laptop service manuals? Please read this. Introduction In the same vein as in my driver guide, I’ve started finding laptop service manuals and hosting them on my site. These are the professional, official documents published by the various laptop makers, either for their own technicians or for the use of the general public. They generally detail the exact list of parts in each model of laptop – often down to individual screws, if you happen to have lost some and need to know the exact size for a replacement – and describe the procedure for disassembling and reassembling the entire machine, including panels, RAM, wireless cards, keyboards and touchpads and LCD screens, all the way down to the motherboard itself. They’re difficult to find – you have to know where to look in their support site, or come up with the right Google search string, or beg and steal from someone you know in the industry. Practical stuff Organisation Feedback Acer Apple

Ludwig Wittgenstein 1. Biographical Sketch Wittgenstein was born on April 26, 1889 in Vienna, Austria, to a wealthy industrial family, well-situated in intellectual and cultural Viennese circles. In 1908 he began his studies in aeronautical engineering at Manchester University where his interest in the philosophy of pure mathematics led him to Frege. During his years in Cambridge, from 1911 to 1913, Wittgenstein conducted several conversations on philosophy and the foundations of logic with Russell, with whom he had an emotional and intense relationship, as well as with Moore and Keynes. In 1920 Wittgenstein, now divorced from philosophy (having, to his mind, solved all philosophical problems in the Tractatus), gave away his part of his family's fortune and pursued several ‘professions’ (gardener, teacher, architect, etc.) in and around Vienna. 2. 2.1 Tractatus Logico-Philosophicus Tractatus Logico-Philosophicus was first published in German in 1921 and then translated—by C.K. 2.2 Sense and Nonsense 3.