Here are some links related to Mary Munroe's course 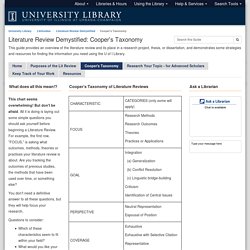 But don't be afraid. All it is doing is laying out some simple questions you should ask yourself before beginning a Literature Review. For example, the first row, "FOCUS," is asking what outcomes, methods, theories or practices your literature review is about. Are you tracking the outcomes of previous studies, the methods that have been used over time, or something else? 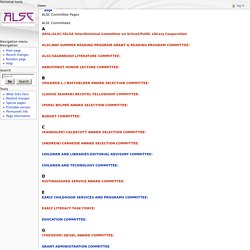 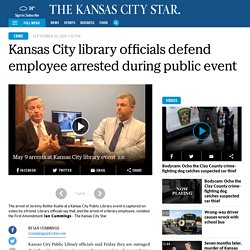 The arrests occurred after a provocative question was asked at the question-and-answer period of a May 9 talk by diplomat Dennis Ross. For months, library officials protested that the arrests and charges were a violation of the First Amendment. Justice Louis D. Brandeis. From The Encyclopedia of World Biography As an associate justice of the U.S.

"Sunshine is the best disinfectant." – skellyinjinan

Supreme Court, Louis Dembitz Brandeis (1856-1941) tried to reconcile the developing powers of modern government and society with the maintenance of individual liberties and opportunities for personal development. 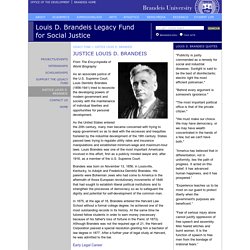 As the United States entered the 20th century, many men became concerned with trying to equip government so as to deal with the excesses and inequities fostered by the industrial development of the 19th century. Judge Dismisses Final Lawsuit Between Orland Park PL, Bloggers. Orland Park Public Library, IL On May 16 U.S. 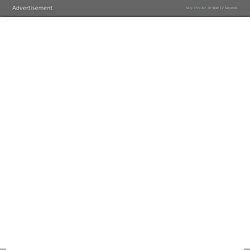 District Judge John J. Tharp Jr. dismissed a second amended complaint filed by Bridget Bittman, former public information director of the Orland Park Public Library (OPPL), IL, against New Jersey–based blogger Dan Kleinman, who describes himself as a “library watchdog” on his website SafeLibraries. Bittman’s complaint was one in a series of suits and countersuits between local bloggers Megan Fox and Kevin DuJan and their associate Kleinman, touched off after Fox alleged that she saw a man looking at pornography while at the library in 2013. Fox and DuJan, eventually joined by Kleinman, challenged OPPL’s Internet filtering policies—first approaching the library’s board of trustees at their regular meetings, then initiating a lengthy series of Freedom of Information Act (FOIA) requests, leading to a string of legal battles and Bittman’s eventual resignation. Board of Educ. v. Pico. First, the plurality argues that the right to receive ideas is derived in part from the sender's First Amendment rights to [p888] send them. 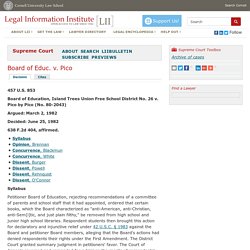 Yet we have previously held that a sender's rights are not absolute. Rowan v. Post Office Dept., 397 U.S. 728 (1970). [n4] Never before today has the Court indicated that the government has an obligation to aid a speaker or author in reaching an audience. the right to receive ideas is a necessary predicate to the recipient's meaningful exercise of his own rights of speech, press, and political freedom. Orland Park Public Library Subject of New Book About Censorship. May 22, 2016 · A new book called SHUT UP! 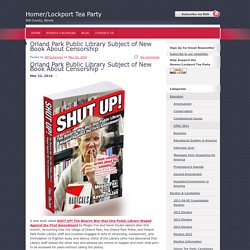 We covered this story in great detail over the last few years and are looking forward to reading Fox & DuJan’s full account of everything that transpired. Whom to follow in Collection Development.