Tiny houses – small dwellings of every shape and size 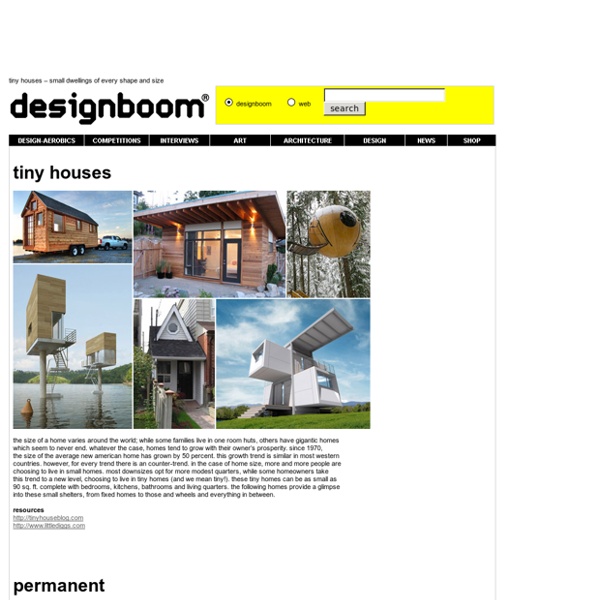 Japanese House Built for $11,000 by Off Grid Champion - Brian Schulz The Japanese Forest House is a confluence of my love of small spaces, my passion for local materials, and my fascination with tradtional Japanese architecture. For those familiar with the intensely refined art of traditional Japanese carpentry, applying the title of 'Japanese' onto my house might be laying it on a bit thick. It's true I've fallen short of the refinement found in the homes of the upper classes, however, the work still embraces the design principles that make the traditonal tea houses (which were, ironically, modeled after peasant shacks) so appealing.

Radiant Floor Heat - A Review - MiniMotives I often get questions about my radiant floor heat and I realized I never reviewed it… So here we go! Was it ‘worth it’ – It certainly served its purpose as a learning project, I learned how to install and operate it, I have no regrets about adding the thermal mass in the floor (and the extra axle that came with accommodating that). For me this was a learning project and I have indeed learned! Now, Would I do it again? – Naw. I would not. French carpenters craft whimsical off-grid tiny house hamlet A few years ago, a group of carpenters (and friends) began building tiny homes on a property in southwest France using material from the woods, tools from the past (and present) and the freedom afforded by relying on their own labor. Today the forested land looks straight out of a fairy tale. There’s a tiny mud house with a living roof, a handcrafted caravan home perched above wagon wheels, a wood-heated bathtub (and a jacuzzi run off timber scraps), a bicycled-powered wood carving machine, an earthen bread/pizza oven, an underground wine and cheese cellar (AKA the “hobbit-iere”), experimental gardens and a chicken coop treehouse. Menthé was one of the original homesteaders, who along with his friend Yogan (the landowner), built the original mud cabin for winter; they created large doors on both sides of the structure so their cars could be connected as heated bedrooms.

Sustainable Living and Tiny House Resources - Treading TINY I’ll sprinkle great sources of self-sufficient living, good clean food, and sustainable housing info all over this page. Stay tuned. TinyHouseBlog.com TinyHouseDesign.com Deconstructing luxury in small home + tiny cabin + treehouse After several decades as an airline executive (including Delta president, Virgin America CEO, and Lufthansa president & CEO), Fred Reid could have built a McMansion, but instead he chose to grow his home without taking on debt and embracing nature by adding small outbuildings. When Reid bought his aunt’s Sonoma County property, he wanted to “recapture the indistinguishable border between indoors and outdoors that I had as a child in Ethiopia”. Instead of tearing down her tiny cottage, he made enlarged it a bit and opened it up to the outdoors with floor-to-ceiling windows or doors in nearly all the rooms, including the shower and toilet room. Years later, he nestled a tiny cabin (a prefab from Modern Cabaña) in a redwood grove to serve as an office and guest space (it’s complete with a easy-touch pull-out couch and electric fireplace for heat).

Tiny House Contest 2014 - Simple Solar Homesteading 2014 Tiny Off-Grid House Design Contest Results Sponsors: www.simplesolarhomesteading.com and www.tinyhousetalk.com The purpose of this skills contest was to give people an opportunity to explore the ways that off-grid alternative power, water, septic, and grey water systems could be incorporated into tiny house designs. The categories for the contest were houses under 200 sqft, houses 201-400 sqft and alternative houses such as houses on wheels, houseboats, etc. We received 31 entries that were accepted and from those we selected the designs that best captured the full intent of the contest. Tiny House In The Outback Once upon a time, I lived in Australia for a while, the thing that remember so clearly is how big the country is and how much space is available. The country is the size of the US, with a population well under 25 million, where 80% of that population lives within 50 miles of the coast, this means that the interior of the continent is very very empty. There is a strong sense of quasi cowboy feel to being in the outback, where I lived while I was there. This house not only captures that sense of the rough and tumble of the bush, but is sustainable too.

Archive Seattle aPodments Cash strapped minimum wage workers and students in the Seattle area are seeking and welcoming more affordable housing in their city, but the explosion of the aPodment micro housing units in Seattle is drawing new criticism in this dense metropolitan area. City officials are claiming that these 200 square feet tiny units are unregulated and skirt the city’s building laws. Many of the aPodments built by Calhoun Properties offer downtown amenities like private bathrooms and kitchenettes, lofts, security, private decks, access to public transportation, skylights, granite countertops and shared amenities like BBQs, roof decks and ADA accessible group kitchens. Some of these tiny spaces also come with furniture and utilities paid all for around $500-$750 a month. All this in a city where rent prices are around $1,200 a month. Photos by aPodments/Calhoun Properties

Steel Clad 350 Sq. Ft. Modern Cabin on Stilts with Shutters on August 15, 2014 Check out this 350 sq. ft. low-maintenance and virtually indestructible modern cabin on stilts with steel shutters. The owner’s hired Olson Kundig Architects to build a weekend cabin that could provide them with a rural retreat during their get-aways to Washington’s Olympic National Park. Since the cabin would be left uninhabited for weeks at a time steel shutters were used to completely enclose and secure the cabin when the owners are away. As you walk up the stairs to the front door and through a small entry way you will see the bathroom on the left and straight ahead the main living space.