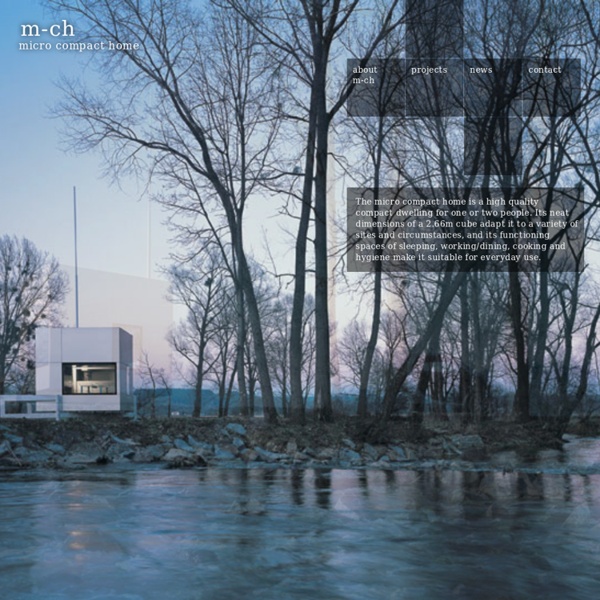 The Micro Cube Portable Home Imagine this, owning a micro-sized house that needs no furniture and no extra rooms. A future-forward home that gave you the feeling of living in your own sci-fi film, set on a distant planet. If this image appeals to you, welcome to your dream home: The m-ch (micro-compact home). A team of researchers and designers based in London and at the Technical University in Munich developed the m-ch as an answer to an increasing demand for short stay living for students, business people, sports and leisure use and for weekenders. The m-ch, now in use and available throughout Europe, combines techniques for high-quality compact “living” spaces deployed in aircraft, yachts, cars and micro apartments. The micro-compact low e-home is all-electric and powered by photovoltaic solar panels of 8sqm with a small diameter vertical axis wind generator. Daytime excess power is diverted into the grid. Inside the m-ch features:

New York City Hotels: Pod Hotel Manhattan NYC discount accommodations near Radio City Music Hall Rockefeller Center Times Square The Micro-Compact Home: m-ch Set to Make Its UK Debut The micro-compact home (m-ch), pioneered by Horden Cherry Lee Architects, is to make its UK debut next month. Following the international attention sparked by the O2 Germany sponsored student village of micro-compact homes in Munich, Germany the prototype dwelling will be showcased at this year's Grand Designs Live exhibition, at ExCel in Docklands, 2-4 June, before arriving in Berkley Square, central London. 6-10 June 2006. At Grand Designs Live, an exhibition based on Channel 4's hugely popular TV series, m-ch will feature on its own site alongside other world-leading housing concepts the German HUF HAUS, the British PAD concept home and Container City in "The Grand Village" to be built in Royal Victoria Square immediately in front of ExCel's exhibition halls in London's Royal Docks. The micro-compact home is specifically designed for short-stay smart living and is suitable for a variety of locations, providing sophisticated compact accommodation for business or leisure use.

A Micro House To Love The ZeroHouse “zeroHouse” I gotta say, the name doesn’t thrill me. In this age of crappy no-calorie sodas that taste like metal or underfed actresses with no curves who can fit into a size smaller than 1, the word “zero” connotates that something vital is missing or that the product is somehow subpar. And who wants “less than”? I took one look at zeroHouse and thought “Cool design – but what’s it lacking?” zeroHouse is touted as 100% automatic – a home that generates its own electrical power from solar panels and then stores it in a battery backup. Water pumps? Cooler still, everything is connected to sensors and controlled by a centralized laptop known as the “house brain”. Self-reliant and comfortable. But apparently you’re not supposed to live in it. But is it the summer house of the future? But despite the compact factor, I like it.

Award-Winning Suite of Suitcase Rooms from Toshihiko Suzuki Architect Another ingenious design for saving space comes from Toshihiko Suzuki Architect – 3 complete foldaway rooms: KENCHIKUKAGU. The firm has won a well-deserved design award for the concept. The shortest becomes a kitchen, the middle height one becomes a stowaway office, and the tallest is a guest bedroom. This one is the bedroom. It is also a great option for young renters on the go, an instant take-it-with-you bedroom for themselves, or to accommodate guests. Every guest needs a place to catch up with the world on their laptop. The bed does looks just a tad short for an adult, however. The middle sized “suitcase room” opens out like a shell to become an office. These shelves could be made to stow permanently with another fold up piece in the front to make them bins. The table is cleverly designed to fill both sides of the clamshell when closed. The kitchen is the most compact, which is good as it will be heaviest, because it includes a tiny fridge, a sink, and a cooktop. Via Cubeme

Recession Special: Home & Workplace in Ten Feet by Forty Size: 400 sq. ft.Location: East Village, New York CityArchitect: Jordan Parnass Digital Architecture Storage, restraint, and efficiency were key in carving this bachelor’s studio in the East Village into a live-work sculpture for a grown-up. Living and working in just under 500 square feet, Michael Pozner, Head of Retail Development for American Apparel (which is based in LA), had been pushing the limits of what his apartment, in its current configuration, would accommodate. He’d purchased the studio back in 1999, before the boom of the last decade, and wasn’t anxious to move. But between his office needs and his many toys and quirky art pieces, the apartment was jam-packed and nothing had a place. The solution was ultimately about exploiting every opportunity for storage, and then combining those spaces and the kitchen, bathroom, and sleeping loft into an intricately sculpted wood-paneled central service core. The before shot. Michael is always working on several projects at once.

Atelier OPA » About us About us From left to right, Yuki Sugihara, Munetaka Ishikawa, and Toshihiko Suzuki Address:1-14-14 Tounkyo bld. 4F Uchikanda Chiyoda-ku Tokyo 101-0047 Japan Tel/Fax :81-3-3293-2211 E-mail:info atelier-opa.com Member Yuki Sugihara Toshihiko Suzuki Munetaka Ishikawa Atelier OPA endeavor to create product design, art, interior design, and architecture with an original touch.Ph.D. We believe “Design and hospitality beyond borders” We like to study good design and art and architecture of all over the world. Suzuki, our member architect, used to exhibit in Milano Salone, Italy (2004, 2005, 2006) and Designer’s block in London(2002, 2003 ). Sugihara, as an artist and a researcher, likes to study languages in abroad. Ishikawa, a silent designer, he suddenly becomes talkative as for football. We hope to see you soon in your town! From Tokyo Narita International Airport 80 to 90 minutes to Tokyo Station by Limousine Bus 53 minutes to Tokyo Station by JR Narita Express MAP of ATELIER OPA

Historic Shepherds Huts - on the move A quick note to say that the excellent site dedicated to shepherds' huts - Historic Shepherds Hut ("a web based archive dedicated to record survivors and the forgotten part they once played in our country's rich agricultural past") - is heading to a new location at www.shepherdhuts.co.uk because of hosting problems. They're still in the process of moving everything across but it's worth changing your bookmarks now as they are also planning to expand the site to deal with lots of new huts which have come their way as a result of recent media coverage. Incidentally, if you have a shepherd's hut for sale, please do contact Shedworking - there were many, many disappointed readers who were very interested in the last one we advertised (including the editor of a wellknown national magazine) that I'm sure you'd find a buyer quickly. Our Monday posts are sponsored by garden2office, the Swedish garden officespecialists.Click here for more details.

Hobbitat Tiny House Builder Offers Micro to Small Reclaimed Cabins In this post you’re going to get introduced to a small/tiny house builder you may have never heard of before. They go by Hobbitat who are building cabins for Blue Moon Rising. Hobbitat Tiny Houses and Small Cabins/Cottages The great part about these is that you can try out one of their tiny cabins first to see how you like living small at a tiny cabin rental at Blue Moon Rising because they built those for them. And if you love it, you can always have Hobbitat build your own unique cottage/cabin or tiny house. Let me show you just a few of the tiny and small cabins they’ve built so far: Tiny Cabin: View from Inside with the Front Door Open Interior of the Small Cabin Back door? I really love the rustic look and feel to it and the use of reclaimed materials throughout. Most Awesome DIY Murphy Bed I’ve Seen.. More Cabins from Hobbitat The really small ones are outdoor showers that are going to Blue Moon Rising. Rustic/Reclaimed Tiny House Sliding Door System Ladder to Sleeping Loft Antique Door Knob