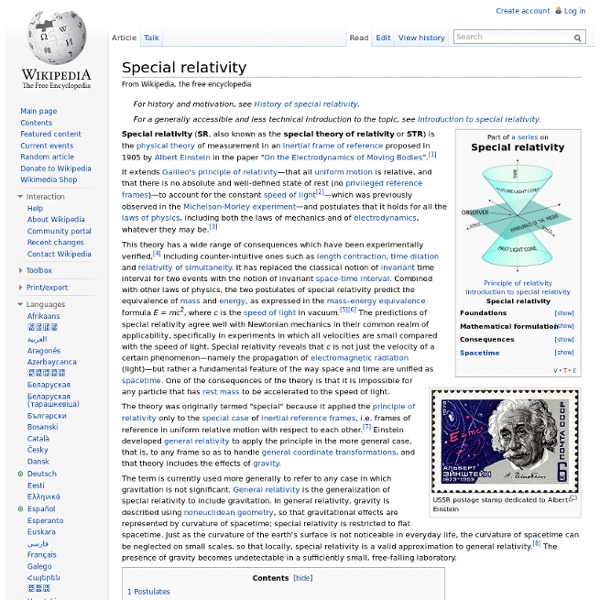 Special relativity implies a wide range of consequences, which have been experimentally verified,[2] including length contraction, time dilation, relativistic mass, mass–energy equivalence, a universal speed limit, and relativity of simultaneity. It has replaced the conventional notion of an absolute universal time with the notion of a time that is dependent on reference frame and spatial position. Rather than an invariant time interval between two events, there is an invariant spacetime interval. Combined with other laws of physics, the two postulates of special relativity predict the equivalence of mass and energy, as expressed in the mass–energy equivalence formula E = mc2, where c is the speed of light in vacuum.[3][4] A defining feature of special relativity is the replacement of the Galilean transformations of classical mechanics with the Lorentz transformations. Postulates[edit] Lack of an absolute reference frame[edit] Relativity theory depends on "reference frames". where we get Related:  Collection

Kennedy–Thorndike experiment Figure 1. The Kennedy–Thorndike experiment Improved variants of the Kennedy–Thorndike experiment have been conducted using optical cavities or Lunar Laser Ranging. For a general overview of tests of Lorentz invariance, see Tests of special relativity. The experiment[edit] The original Michelson–Morley experiment was useful for testing the Lorentz–FitzGerald contraction hypothesis only. The principle on which this experiment is based is the simple proposition that if a beam of homogeneous light is split […] into two beams which after traversing paths of different lengths are brought together again, then the relative phases […] will depend […] on the velocity of the apparatus unless the frequency of the light depends […] on the velocity in the way required by relativity. Referring to Fig. 1, key optical components were mounted within vacuum chamber V on a fused quartz base of extremely low coefficient of thermal expansion. Theory[edit] Basic theory of the experiment[edit] Figure 2. where

Time dilation of moving particles Relation between the Lorentz factor γ and the time dilation of moving clocks. Time dilation of moving particles as predicted by special relativity can be measured in particle lifetime experiments. According to special relativity, the rate of clock C traveling between two synchronized laboratory clocks A and B is slowed with respect to the laboratory clock rates. This effect is called time dilation. Atmospheric tests[edit] a) View in S b) View in S′ c) Loedel diagram (In order to make the differences smaller, 0.7c was used instead of 0.995c) Theory[edit] The emergence of the muons is caused by the collision of cosmic rays with the upper atmosphere, after which the muons reach Earth. Time dilation and length contraction Length of the atmosphere: The contraction formula is given by , where L0 is the proper length of the atmosphere and L its contracted length. Decay time of muons: The time dilation formula is In S, muon-S′ has a longer decay time than muon-S. Minkowski diagram Experiments[edit] and

Ives–Stilwell experiment Ives–Stilwell experiment (1938). "Canal rays" (a mixture of mostly H2+ and H3+ ions) were accelerated through perforated plates charged from 6,788 to 18,350 volts. The beam and its reflected image were simultaneously observed with the aid of a concave mirror offset 7° from the beam.[1] (The offset in this illustration is exaggerated.) The Ives–Stilwell experiment tested the contribution of relativistic time dilation to the Doppler shift of light.[1][2] The result was in agreement with the formula for the transverse Doppler effect, and was the first direct, quantitative confirmation of the time dilation factor. Experiments with "canal rays"[edit] The experiment of 1938[edit] Ives remarked that it is nearly impossible to measure the transverse Doppler effect with respect to light rays emitted by canal rays at right angles to the direction of motion of the canal rays (as it was considered earlier by Einstein), because the influence of the longitudinal effect can hardly be excluded.

Michelson–Morley experiment Figure 1. Michelson and Morley's interferometric setup, mounted on a stone slab and floating in a pool of mercury. The Michelson–Morley experiment was published in 1887 by Albert A. Michelson and Edward W. Michelson–Morley type experiments have been repeated many times with steadily increasing sensitivity. Detecting the aether[edit] Physics theories of the late 19th century assumed that just as surface water waves must have a supporting substance, i.e. a "medium", to move across (in this case water), and audible sound requires a medium to transmit its wave motions (such as air or water), so light must also require a medium, the "luminiferous aether", to transmit its wave motions. Figure 2. According to this hypothesis, Earth and the aether are in relative motion, implying that a so-called "aether wind" (Fig. 2) should exist. 1881 and 1887 experiments[edit] Michelson experiment (1881)[edit] Figure 3. Michelson–Morley experiment (1887)[edit] Figure 5. Figure 6. Figure 7. Figure 4.

cahier physique - physics workbook PART I click here (from Copernicus to Newton) movie to watch: greatest discoveries in Astronomy from discovery channel (42 minutes)Willam Herschel He gave up music for astronomy. Built huge telescopes and discovered Uranus and the milky way.+ other objects like comets.Here to learn more general relativity At the end of 19th century some problems with Newtonian Physics arose. watch that movie (from NOVA) Einstein's theory triumphed when the light from a star was observed to be curved during a solar eclipse.lNo matter ca go faster than the speed of light and the speed of light does not depend on theframe of reference it is measured in ! llight is made of particle waves = photons. galaxies, universe is expanding , big bang20s 1927 Edwin Hubble using the observatory at Mt Wilson understands that some of thesefuzzy clouds observed in the background of stars are in fact far away galaxies. radio waves from the center of the milky way are detected30s form WMAP pulsars?

Biologist warn of early stages of Earth's sixth mass extinction event -- ScienceDaily The planet's current biodiversity, the product of 3.5 billion years of evolutionary trial and error, is the highest in the history of life. But it may be reaching a tipping point. In a new review of scientific literature and analysis of data published in Science, an international team of scientists cautions that the loss and decline of animals is contributing to what appears to be the early days of the planet's sixth mass biological extinction event. Since 1500, more than 320 terrestrial vertebrates have become extinct. Populations of the remaining species show a 25 percent average decline in abundance. And while previous extinctions have been driven by natural planetary transformations or catastrophic asteroid strikes, the current die-off can be associated to human activity, a situation that the lead author Rodolfo Dirzo, a professor of biology at Stanford, designates an era of "Anthropocene defaunation." The scientists also detailed a troubling trend in invertebrate defaunation.

Why Probability in Quantum Mechanics is Given by the Wave Function Squared One of the most profound and mysterious principles in all of physics is the Born Rule, named after Max Born. In quantum mechanics, particles don’t have classical properties like “position” or “momentum”; rather, there is a wave function that assigns a (complex) number, called the “amplitude,” to each possible measurement outcome. The Born Rule is then very simple: it says that the probability of obtaining any possible measurement outcome is equal to the square of the corresponding amplitude. (The wave function is just the set of all the amplitudes.) Born Rule: The Born Rule is certainly correct, as far as all of our experimental efforts have been able to discern. That’s right. The status of the Born Rule depends greatly on one’s preferred formulation of quantum mechanics. It’s an ungainly mess, we all agree. Of course we can do better, since “textbook quantum mechanics” is an embarrassment. Like the textbook formulation, Everettian quantum mechanics also comes with a list of postulates.

Random walk Example of eight random walks in one dimension starting at 0. The plot shows the current position on the line (vertical axis) versus the time steps (horizontal axis). A random walk is a mathematical formalization of a path that consists of a succession of random steps. Various different types of random walks are of interest. . is defined for the continuum of times . Lattice random walk[edit] A popular random walk model is that of a random walk on a regular lattice, where at each step the location jumps to another site according to some probability distribution. One-dimensional random walk[edit] An elementary example of a random walk is the random walk on the integer number line, , which starts at 0 and at each step moves +1 or −1 with equal probability. This walk can be illustrated as follows. All possible random walk outcomes after 5 flips of a fair coin Random walk in two dimensions with two million even smaller steps. To define this walk formally, take independent random variables and . of .

Astronomers discover complex organic matter exists throughout the universe -- ScienceDaily Astronomers report in the journal Nature that organic compounds of unexpected complexity exist throughout the Universe. The results suggest that complex organic compounds are not the sole domain of life but can be made naturally by stars. Prof. Sun Kwok and Dr. Yong Zhang of The University of Hong Kong show that an organic substance commonly found throughout the Universe contains a mixture of aromatic (ring-like) and aliphatic (chain-like) components. The researchers investigated an unsolved phenomenon: a set of infrared emissions detected in stars, interstellar space, and galaxies. Not only are stars producing this complex organic matter, they are also ejecting it into the general interstellar space, the region between stars. Most interestingly, this organic star dust is similar in structure to complex organic compounds found in meteorites. Prof.

Monte Carlo method Monte Carlo methods (or Monte Carlo experiments) are a broad class of computational algorithms that rely on repeated random sampling to obtain numerical results; typically one runs simulations many times over in order to obtain the distribution of an unknown probabilistic entity. They are often used in physical and mathematical problems and are most useful when it is difficult or impossible to obtain a closed-form expression, or infeasible to apply a deterministic algorithm. Monte Carlo methods are mainly used in three distinct problem classes: optimization, numerical integration and generation of draws from a probability distribution. The modern version of the Monte Carlo method was invented in the late 1940s by Stanislaw Ulam, while he was working on nuclear weapons projects at the Los Alamos National Laboratory. Immediately after Ulam's breakthrough, John von Neumann understood its importance and programmed the ENIAC computer to carry out Monte Carlo calculations. Introduction[edit]