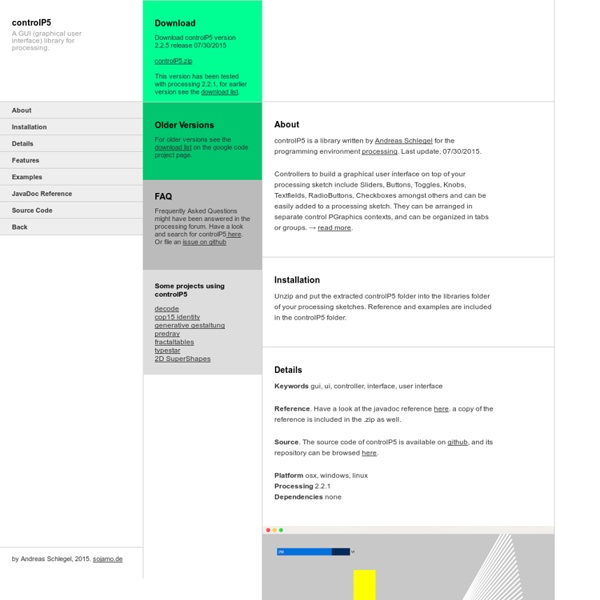 About controlP5 is a library written by Andreas Schlegel for the programming environment processing. Last update, 07/30/2015. Controllers to build a graphical user interface on top of your processing sketch include Sliders, Buttons, Toggles, Knobs, Textfields, RadioButtons, Checkboxes amongst others and can be easily added to a processing sketch. Installation Unzip and put the extracted controlP5 folder into the libraries folder of your processing sketches. Details Keywords gui, ui, controller, interface, user interface Reference. Source. Platform osx, windows, linux Processing 2.2.1 Dependencies none User interface for the 'vulcano generator'. project synthazards, syntfarm. A complete list of features can be found on controlP5's github page. Features Automatic controller-event detectionControlP5 offers a range of controllers that allow you to easily change and adjust values while your sketch is running. Custom FontsBy default controlP5 uses a bitFont to render text. Examples

Wiring PeasyCam peasycam v201 A library by Jonathan Feinberg for the programming environment processing. Distributed under the Apache Public License, version 2.0. Last update, 04/09/2014. PeasyCam provides a dead-simple mouse-driven camera for Processing. Example PeasyCam camera; void setup() { camera = new PeasyCam(this, 0, 0, 0, 50); } That's it. The PeasyCam is positioned on a sphere whose radius is the given distance from the look-at point. PeasyCam is impervious to gimbal lock, and has no known "singularities" or discontinuities in its behavior. Thanks Useful bug reports and feature suggestions were provided by: Please let me know if I've forgotten to acknowledge you. Download Download peasycam version 201 in .zip format. Installation Unzip and put the extracted peasycam folder into the libraries folder of your processing sketches. Constructors PeasyCam(PApplet parent, double lookAtX, double lookAtY, double lookAtZ, double distance); PeasyCam(PApplet parent, double distance); // look at 0,0,0 Methods Source.

Hemesh : a 3D mesh library for Processing | W:Blut Coded, recoded, lost, recoded and recoded … hemesh , the half-edge mesh library for Processing has slowly accreted to a state that war­rants a release. A release in more than one way. In ret­ro­spect, the cur­rent func­tion­al­ity looks depress­ingly small, espe­cially com­pared to the hun­dreds of hours that already went into cod­ing it. But like a broke home-owner with a base­ment and a half-finished first floor, I com­fort myself with the thought that at least it holds poten­tial for growth. What is hemesh ? hemesh is an imple­men­ta­tion of a half-edge datastructure for manip­u­lat­ing 3D meshes in Processing. Generating and dis­play­ing a mesh requires noth­ing more than a list of ver­tices and a list of faces con­nect­ing them. What can hemesh do? The library is cur­rently focused on the stuff I coded it for: 3D voronoi and ran­dom plane divi­sions. Creating meshes is cool (for a given amount of cool) but destroy­ing them is cooler. What hemesh can’t do… Getting hemesh Future

Processing.org B-processor the Hype Framework / Processing / ProcessingJS / github.com/hype/HYPE_Processing Ani - An animation library for Processing An animation library by Benedikt Groß for the programming environment Processing. Last update, 2013/02/28. Ani 2.5 is a lightweight library for creating animations and transitions. Easily spoken Ani helps you to move things around on the screen or a bit more abstract, to animate any numeric variable. Most of the time a single line of code like the following one is enough: Ani.to(object, duration, variable name, target position, easing); Target object ("this" or any reference to an object), duration of animation specified in seconds or frames, variable name (which numeric variable is used), easing (the characteristic of motion) ... The syntax of Ani is created with simplicity of use in mind. Feedback is very welcome, but please use the processing discourse forum for that. Installation ↑Up Unzip and put the extracted Ani folder into the libraries folder of your processing sketches. Demos Check the demos in the distribution of Ani (zip file), or have a look at them by watching the videos. Ani

Chord Diagram Chord diagrams show directed relationships among a group of entities. This example also demonstrates simple interactivity by using mouseover filtering. Layout inspired by Martin Krzywinski ’s beautiful work on Circos . Source Code InstantSOUP / Physical Computing » Microcontroller Instant Soup support the following platforms: Wiring Wiring is a programming environment and electronics i/o board for exploring the electronic arts, tangible media, teaching and learning computer programming and prototyping with electronics. It illustrates the concept of programming with electronics and the physical realm of hardware control which are necessary to explore physical interaction design and tangible media aspects. Wiring is an open project initiated by Hernando BarragÃ¡n (University of Los Andes | Architecture and Design School). Wiring started at the Interaction Design Institute Ivrea and it is currently developed at the University of Los Andes. Wiring website Arduino Arduino is an open-source physical computing platform based on a simple i/o board and a development environment that implements the Processing/Wiring language. More about MicroControllers

d3.js arduino meets processing - PUSHBUTTON The Arduino meets Processing project intends to make it as easy as possible for anyone to explore the world of physical computing. All you need is an Arduino board as well as the Arduino and Processing software, which you can download on their project websites. On this website we explain how to: set up electronic circuits with various kinds of sensors, control and measure the sensors with the Arduino board, send the data to the computer, and use the received values to generate computer graphics with Processing. For all examples you need some basic electronic equipment such as a breadboard, resistors, the sensors, and some wires. The following sensors are dealt with on this website: All examples contain a list of the parts as well as the Arduino and Processing files you need. The Processing files have a DisplayItems class which paints a grid with values, a black or white background. Feel free to play around and have fun exploring the wonderful world of Arduino and Processing!