Linux Projects - Documentation. How to install or upgrade UV4L on Raspbian (for the Raspberry Pi) To install UV4L open a terminal and type the following commands: $ wget && sudo apt-key add . 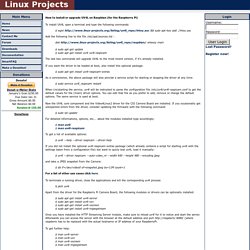 /lrkey.asc Add the following line to the file /etc/apt/sources.list : deb wheezy main$ sudo apt-get update$ sudo apt-get install uv4l uv4l-raspicam The last two commands will upgrade UV4L to the most recent version, if it's already installed. If you want the driver to be loaded at boot, also install this optional package: $ sudo apt-get install uv4l-raspicam-extras As a convenience, the above package will also provide a service script for starting or stopping the driver at any time: $ sudo service uv4l_raspicam restart When (re)starting the service, uv4l will be instructed to parse the configuration file /etc/uv4l/uv4l-raspicam.conf to get the default values for the (main) driver options.

Now the UV4L core component and the Video4Linux2 driver for the CSI Camera Board are installed.

SciKits - main. Scikits-image. Scikit-learn. PyGPU. Haven't you ever dreamt of writing code in a very high level language and have that code execute at speeds rivaling that of lower-level languages? 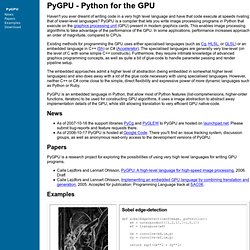 PyGPU is a compiler that lets you write image processing programs in Python that execute on the graphics processing unit (GPU) present in modern graphics cards. This enables image processing algorithms to take advantage of the performance of the GPU. In some applications, performance increases approach an order of magnitude, compared to CPUs. Existing methods for programming the GPU uses either specialised languages (such as Cg, HLSL, or GLSL) or an embedded language in C++ (Sh) or C# (Accelerator). The specialised languages are generally very low-level (on the level of C with some simple C++ constructs). The embedded approaches admit a higher level of abstraction (being embedded in somewhat higher level languages) and also does away with a lot of the glue code necessary with using specialised languages.

News Papers Examples Download links NumPy. Mahotas. A dedicated mahotas page with documentation is available at This page is just a summary. 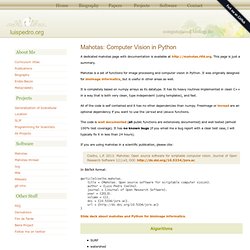 Mahotas is a set of functions for image processing and computer vision in Python. It was originally designed for bioimage informatics, but is useful in other areas as well. It is completely based on numpy arrays as its datatype. It has its heavy routines implemented in clean C++ in a way that is both very clean, type independent (using templates), and fast.

All of the code is self contained and it has no other dependencies than numpy. The code is well documented (all public functions are extensively documented) and well tested (almost 100% test coverage). If you are using mahotas in a scientific publication, please cite: Pymorph. The pymorph Morphology Toolbox for Python is a powerful collection of latest state-of-the-art gray-scale morphological tools that can be applied to image segmentation, non-linear filtering, pattern recognition and image analysis. 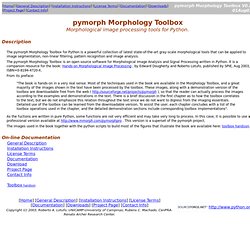 The pymorph Morphology Toolbox is an open source software for Morphological Image Analysis and Signal Processing written in Python. It is a companion resource for the book: Hands-on Morphological Image Processing , by Edward Dougherty and Roberto Lotufo, published by SPIE, Aug 2003, ISBN=0-8194-4720-X. From its preface: "The book is hands-on in a very real sense. Most of the techniques used in the book are available in the Morphology Toolbox, and a great majority of the images shown in the text have been processed by the toolbox. As the fuctions are written in pure Python, some functions are not very efficient and may take very long to process. Python Morphology Toolbox. Pymorph is a collection of pure python implementations of many image morphology functions. 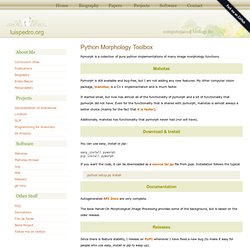 Mahotas Pymorph is still available and bug-free, but I am not adding any new features. My other computer vision package, mahotas, is a C++ implementation and is much faster. It started small, but now has almost all of the functionality of pymorph and a lot of functionality that pymorph did not have. Even for the functionality that is shared with pymorph, mahotas is almost always a better choice (mainly for the fact that it is faster). Additionally, mahotas has functionality that pymorph never had (nor will have). Download & Install You can use easy_install or pip:: easy_install pymorph pip install pymorph If you want the code, it can be downloaded as a source tar.gz file from pypi. Python Imaging Library (PIL) The Python Imaging Library (PIL) adds image processing capabilities to your Python interpreter. 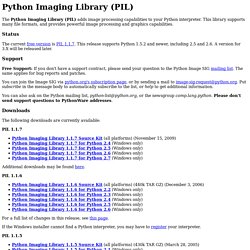 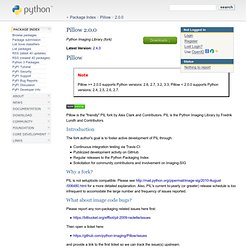 Pillow is the "friendly" PIL fork by Alex Clark and Contributors. PIL is the Python Imaging Library by Fredrik Lundh and Contributors. Introduction The fork author's goal is to foster active development of PIL through: Continuous integration testing via Travis-CIPublicized development activity on GitHubRegular releases to the Python Packaging IndexSolicitation for community contributions and involvement on Imaging-SIG Documentation The API documentation included with PIL has been converted (from HTML generated by pythondoc) to reStructured text (via pandoc) and is now hosted by readthedocs.org. Platform support Current platform support for Pillow. Contributors please test on your platform, edit this document and send a pull request.