Event Sourcing Basics — Event Store. This document is intended to be an introduction to the concepts behind the Event Store. 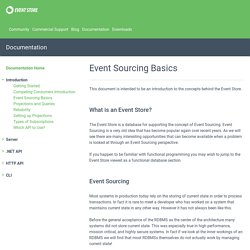 What is an Event Store? The Event Store is a database for supporting the concept of Event Sourcing. Event Sourcing is a very old idea that has become popular again over recent years. As we will see there are many interesting opportunities that can become available when a problem is looked at through an Event Sourcing perspective. If you happen to be familiar with functional programming you may wish to jump to the Event Store viewed as a functional database section. Event Sourcing Most systems in production today rely on the storing of current state in order to process transactions. Before the general acceptance of the RDBMS as the center of the architecture many systems did not store current state. Event sourcing with reactor and spring statemachine. Reactor - a foundation for asynchronous applications on the JVM. We’re pleased to announce that, after a long period of internal incubation, we’re releasing a foundational framework for asynchronous applications on the JVM which we’re calling Reactor. 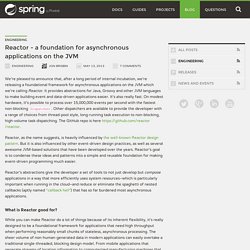 It provides abstractions for Java, Groovy and other JVM languages to make building event and data-driven applications easier. It’s also really fast. On modest hardware, it’s possible to process over 15,000,000 events per second with the fastest non-blocking Dispatcher. Other dispatchers are available to provide the developer with a range of choices from thread-pool style, long-running task execution to non-blocking, high-volume task dispatching. The GitHub repo is here Reactor, as the name suggests, is heavily influenced by the well-known Reactor design pattern. What is Reactor good for? That’s why the Spring XD project (as well as several other Spring ecosystem projects like Spring Integration and Spring Batch) intend to take advantage of Reactor. Selectors, Consumers and Events To Groovy, with Love. 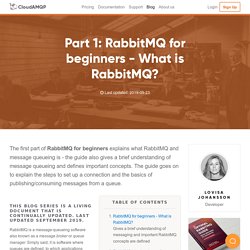 The guide goes on to explain the steps to set up a connection and the basics of publishing/consuming messages from a queue. Apache ActiveMQ ™ 4.1.x Architecture - Apache Stratos. The following diagram illustrates Apache Stratos 4.1.x layered architecture at a high level: The bottom most layer in the Stratos architecture is the Infrastructure as a Service (laaS) layer. 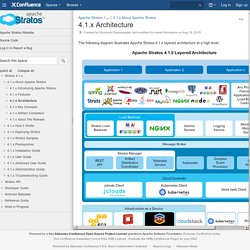 In virtual machine (VM) scenarios, Stratos uses jclouds to communicate with the underlying IaaS. As a result, Stratos is capable of supporting any IaaS (e.g., EC2, OpenStack, CloudStack, Google cloud, etc.) that is compatible with jclouds. In addition, Stratos uses Google Kubernetes together with CoreOS to integrate Docker with Stratos. Stratos also has a Mock IaaS, which simulates all the basic features that Stratos requires from an IaaS, so that Stratos can be tested easily at zero cost. Stratos core comprises of the following key components: Stratos Manager, Auto-scaler, REST API/CLI/Web UI, Artifact Distribution Coordinator (ADC) and Complex Event Processor (CEP). Autoscaler is responsible for the elasticity of all the components of the system. Benefits.

Lakmal's View: Sneak peek into Apache Stratos (Incubating) 4.0.0. In this blog post, I am trying to explain in detail of functionality and benefits that you can get from composite application support. 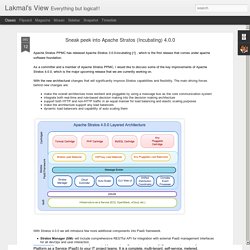 First of all, I like to give very big thanks to CISCO individuals, who provided real world use cases, feedbacks and support for carrying out all the testing and also all Apache Stratos committers who did really awesome job to make this into reality with tremendous effort. With this release cartridge subscription going to be obsolete and application deployment going to be replace it with more functionalities. User can defined application with its required service runtimes, deployment and auto scaling policies, artifact repositories and all dependencies in simple structured json files which Stratos can understand and provision all required runtimes in defined manner.

Programming & DevOps news, tutorials & tools. 5 reasons why Spark Streaming’s batch processing of data streams is not stream processing. There are undoubtedly several approaches to the way systems deal with real-time data before it is persisted in a database. 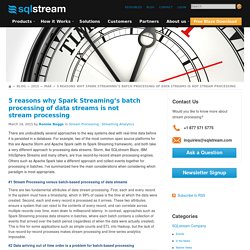 For example, two of the most common open source platforms for this are Apache Storm and Apache Spark (with its Spark Streaming framework), and both take a very different approach to processing data streams. Storm, like SQLstream Blaze, IBM InfoSphere Streams and many others, are true record-by-record stream processing engines. Comparison of Apache Stream Processing Frameworks: Part 1. A couple of months ago we were discussing the reasons behind increasing demand for distributed stream processing. 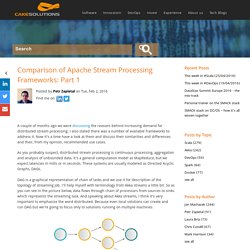 I also stated there was a number of available frameworks to address it. Now it’s a time have a look at them and discuss their similarities and differences and their, from my opinion, recommended use cases. As you probably suspect, distributed stream processing is continuous processing, aggregation and analysis of unbounded data. It’s a general computation model as MapReduce, but we expect latencies in mills or in seconds.

These systems are usually modeled as Directed Acyclic Graphs, DAGs. Architecture - Complex Event Processor 3.0.0 - WSO2 Documentation. Skip to end of metadataGo to start of metadata The WSO2 CEP architecture consists of the following components: The diagram below depicts the architecture with its components. 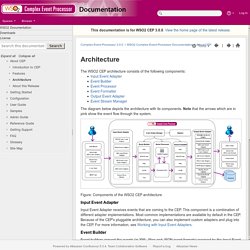 Note that the arrows which are in pink show the event flow through the system. Figure: Components of the WSO2 CEP architecture. Working with Execution Plans - Complex Event Processor 3.0.0 - WSO2 Documentation. GitHub - wso2/siddhi.