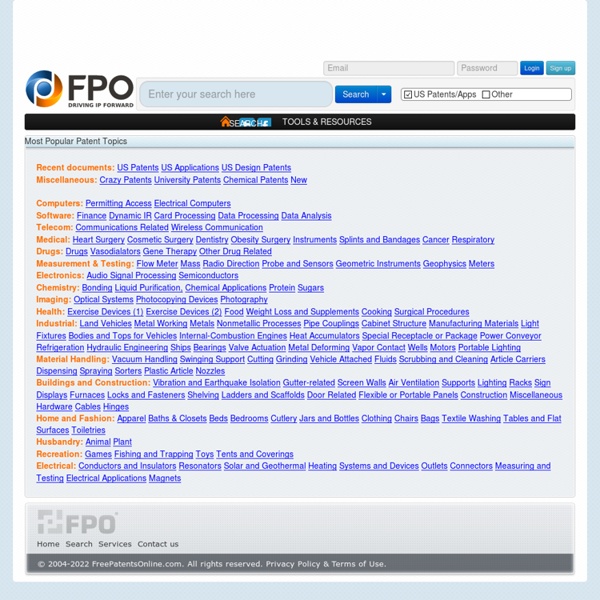 Patents What is a patent? A patent is an intellectual property right granted by the Government of the United States of America to an inventor “to exclude others from making, using, offering for sale, or selling the invention throughout the United States or importing the invention into the United States” for a limited time in exchange for public disclosure of the invention when the patent is granted. There are three types of patents. Utility patents may be granted to anyone who invents or discovers any new and useful process, machine, article of manufacture, or composition of matter, or any new and useful improvement thereof. Here is the process for obtaining a utility patent.

Kids and Inventions - Invention Tips Read these 15 Kids and Inventions Tips tips to make your life smarter, better, faster and wiser. Each tip is approved by our Editors and created by expert writers so great we call them Gurus. LifeTips is the place to go when you need to know about Invention tips and hundreds of other topics. UK: mortgage re-possessions - The Poverty Site United Kingdom Key points Mortgage re-possessions rose sharply between 2004 and 2009 - from 8,000 in 2004 to 48,000 in 2009 - before falling back somewhat in 2010 (to 36,000). They are currently similar to the levels of the mid-1990s. Court claims for re-possession also rose sharply between 2004 and 2008 before falling in both 2009 and 2010.

Patent Overview A patent is essentially a limited monopoly whereby the patent holder is granted the exclusive right to make, use, and sell the patented innovation for a limited period of time. The U.S. Patent Act, 35 U.S.C. §§ 1 et seq., was enacted by Congress under its Constitutional grant of authority to secure for limited times to inventors the exclusive right to their discoveries. See Article I, Section 8, Clause 8. Free Audio Books: Download Great Books for Free Download a Free Audiobook from Audible and also AudioBooks.com Download hundreds of free audio books, mostly classics, to your MP3 player or computer. Below, you’ll find great works of fiction, poetry and non-fiction, by such authors as Twain, Tolstoy, Hemingway, Orwell, Vonnegut, Nietzsche, Austen, Shakespeare, Asimov, HG Wells & more. Also please see our related collection: The 150 Best Podcasts to Enrich Your Mind.

Why Failure Drives Innovation This essay was written by Baba Shiv, Sanwa Bank, Ltd. Professor of Marketing at the Stanford Graduate School of Business Failure is a dreaded concept for most business people. But failure can actually be a huge engine of innovation for an individual or an organization. The trick lies in approaching it with the right attitude and harnessing it as a blessing, not a curse. The Innovation Secrets of Steve Jobs: Insanely Different Principles for Breakthrough Success What kind of genius creates a product and brand that is so strong and so powerful that people will wait outside the handful of retail outlets that distribute the product, even though … The product has some technical features which are less desirable than the alternative?It has basic functions that actually cause developers and design firms to design around them?Hackers break into the device so that desperate customers from certain wireless providers can use it?It has an audience that’s so loyal they will beg and plead with their cell phone carriers for access to the exclusive device?

The Phoenix Principle Tesla is Smarter Than Other Auto Companies “Car dealers are idiots” said my friend as she sat down for a cocktail. It was evening, and this Vice President of a large health care equipment company was meeting me to brainstorm some business ideas. I asked her how her day went, when she gave the response above. She then proceeded to tell me… Consumer Innovation as New Economic Pattern When he was finished, Mr. Reetz, now 29 and working at Disney Research’s laboratories, put his 79-step how-to guide on a Web site. Since the post went up nearly two years ago, about 1,000 people have joined Mr. Reetz’s forum, and about 50 have built their own scanners from castoff furniture, aircraft aluminum, whiskey boxes and plastic foam.

Blogging Innovation » Get Ready to Accelerate the Innovation Profession Sometimes you become concerned, this is one of those moments. I’m getting concerned that we need to take some urgent action. The Corporate Innovation Manager – is stuck in the middle. Recently I was going through a report, a very helpful one on the on the Corporate Innovation Function – summarizing key findings and detailed results from a study commissioned by HEC Paris. Social Business – Rethinking Innovation, Organization and Leadership Over the course of the last few weeks I have been engaging on a good number of conversations around the subject of Leadership (Which I am hoping to be talking about plenty more very soon, by the way, once a publication makes it out there in the next couple of weeks…), and how social networking is changing the way we view traditional management / leadership moving along from a command-and-control attitude into one of leaders as servants, which clearly comes to define, in my opinion, the next generation of leaders 2.0 for the 21st century. But, I am sure you may be wondering, what would it look like, right? How do we identify those new, emerging leaders both within the workplace, as well as in our own societies?

How to Approach Open Innovation: The 15inno Open Innovation Roadmap As we can define open innovation in many ways, there are also many different approaches to open innovation. How do you get started? OVO Innovation has developed a topology that builds on two defining attributes. It is a good inspirational starter. Disruptive versus Radical Innovations Clayton Christenson’s seminal The Innovator’s Dilemma is now 10 years old, and its central idea of “disruptive innovation” is now part of the everyday language of innovation. Recently, I finally read the book after having loosely tossed the term around for a few years. I was shocked to discover that I had misunderstood the concept and made glib assumptions based on sloppy journalistic references.