Scientists reveal revolutionary palm oil alternative: yeast. The ubiquity of palm oil, which appears in everything from margarine to lipstick, is now widely recognised. 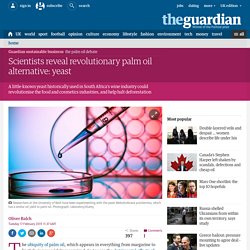 So too are the detrimental effects of palm oil plantations on the world’s remaining rainforests. So why do we keep using it? The simple answer is it’s just too good at what it does. Its versatility comes down to two main stellar properties: an exceptionally high melting point and very high saturation levels. Some vegetable oils get close to one of the two, but none to both. Now researchers at the University of Bath believe they may have hit on an alternative: yeast. Early laboratory tests in a shake flask show that the yeast Metschnikowia pulcherrima – historically known for its use in South Africa’s wine industry – can produce up to 20 grams per litre of oil, giving it a similar lipid profile to palm oil. Where Have All the Cod Gone?

Photo PORTSMOUTH, N.H. — IN November, regulators from the National Oceanographic and Atmospheric Administration shut down recreational and commercial cod fishing in the Gulf of Maine, that enchanting arm of the coastal sea stretching east-northeast from Cape Cod. 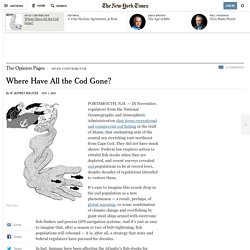 They did not have much choice: Federal law requires action to rebuild fish stocks when they are depleted, and recent surveys revealed populations to be at record lows, despite decades of regulations intended to restore them. How I Crowdsource My Grocery Shopping With Instacart. Grocery shopping in a city is hard. 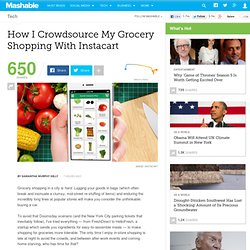 Lugging your goods in bags (which often break and insinuate a clumsy, mid-street re-stuffing of items) and enduring the incredibly long lines at popular stores will make you consider the unthinkable: buying a car. To avoid that Doomsday scenario (and the New York City parking tickets that inevitably follow), I've tried everything — from FreshDirect to HelloFresh, a startup which sends you ingredients for easy-to-assemble meals — to make shopping for groceries more tolerable. This Tree-Shaped Farm-On-A-Skyscraper Could Bring Acres Of Crops Into The City. So far, most existing vertical farms look like big greenhouses or plant factories--all of the action happens on the inside. 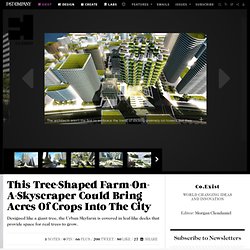 Warehouses in Chicago, Kyoto, Singapore, and a handful of other cities grow plants with ultra-high-efficiency systems under artificial light, and a recent skyscraper in Sweden, built by the urban farming company Plantagon, raises greens near the windows on each floor. But a new design concept from Aprilli Design Studio takes a different approach, using lightweight decks to provide growing space outdoors on the sides of a giant skyscraper. Ncerns grow in Europe over threat from deadly pig virus. 2 May 2014Last updated at 20:22 ET By Matt McGrath Environment correspondent, BBC News. 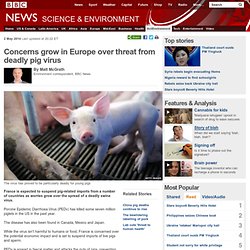 The world’s most endangered food. Many varieties of fruit, meat and vegetable are disappearing from our plates, says Rachel Nuwer. 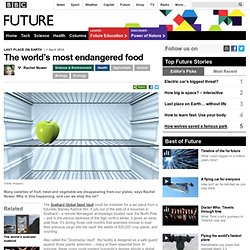 Vertical farms sprouting all over the world - tech - 16 January 2014. BBC Food - Chef holograms and tattooed fruit: The future of food? 30 December 2013Last updated at 10:45 By Michelle Warwicker & Anna-Louise Taylor BBC Food Would you cook along with a hologram of Mary Berry or Michel Roux Jr? 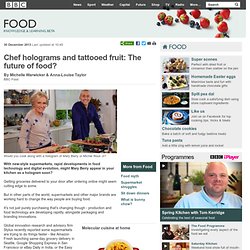 With new-style supermarkets, rapid developments in food technology and digital evolution, might Mary Berry appear in your kitchen as a hologram soon? Getting groceries delivered to your door after ordering online might seem cutting edge to some. Lime Shortages Affecting Restaurants. The world’s growing love affair with the most wasteful form of coffee there is - Quartz. PepsiCo’s Paper-Based Bottle Receives Patent. 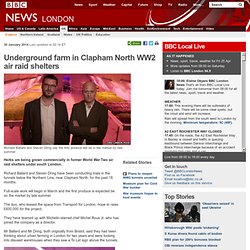 Richard Ballard and Steven Dring have been conducting trials in the tunnels below the Northern Line, near Clapham North, for the past 18 months. Full-scale work will begin in March and the first produce is expected be on the market by late summer. Rice is the new cocaine for European drug dealers. It’s hard out here for a food eater! 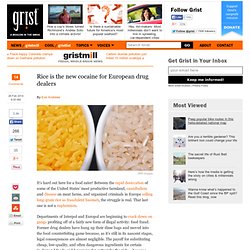 Between the rapid desiccation of some of the United States’ most productive farmland, cannibalism and disease on meat farms, and organized criminals in Europe selling long-grain rice as fraudulent basmati, the struggle is real. Genetically Altered Non-Browning Apples Could Reach U.S. Stores. Fruit salad enthusiasts, take heart. 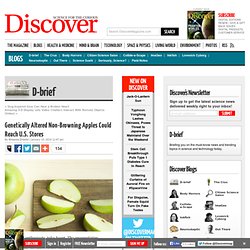 The unappetizing browning of sliced apples could be a thing of the past thanks to genetically-modified fruits that resist oxidation. The apples, currently being grown in test plots in the U.S., are under review by the USDA and currently open for public comment. Approval appears likely. Beating the Brown Apple Tricks to prevent the browning include applying lemon juice or, for large food service companies, a chemical antioxidant called calcium ascorbate. New trends may transform how we eat and drink. The future of food is upon us. Well, according to innovation, research and advisory firm Stylus it is. Food trends in 2014: from digital dining to healthy junk food. It is a blustery winter morning in Mayfair, London, and 100 or so well-heeled representatives from the advertising and retail worlds are huddled in a lecture theatre at the Royal Institution.

This is the future of food, according to Stylus, an "innovation, research and advisory firm" that scours global markets to pinpoint the most influential emerging trends for companies such as Saatchi & Saatchi, Bacardi and Hotel Chocolat. Digital dining. Self-cleaning Dinnerware. Innventia’s researchers in collaboration with the design agency Tomorrow Machine developed three demonstrators for the Swedish Forest Industries Federation inspired by Ekoportal2035. Their objective is to show visions of the future created by original material concepts.

In the future, cellulose will be a natural part of everything from high-tech products to everyday objects. BBC Food - Where has all the goats' cheese gone? 13 January 2014Last updated at 03:34 By Michelle Warwicker BBC Food Goats' cheeses' popularity in Britain has increased significantly over the past five to 10 years Goats' cheese in the UK and other parts of Europe is in short supply.