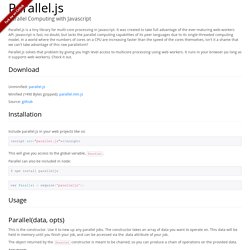 It was created to take full advantage of the ever-maturing web-workers API. Javascript is fast, no doubt, but lacks the parallel computing capabilites of its peer languages due to its single-threaded computing model. In a world where the numbers of cores on a CPU are increasing faster than the speed of the cores themselves, isn't it a shame that we can't take advantage of this raw parallelism? Async. Higher-order functions and common patterns for asynchronous code Async is a utility module which provides straight-forward, powerful functions for working with asynchronous JavaScript. 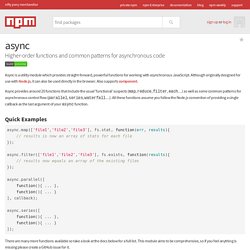 Although originally designed for use with Node.js, it can also be used directly in the browser. Also supports component. Async provides around 20 functions that include the usual 'functional' suspects (map, reduce, filter, each…) as well as some common patterns for asynchronous control flow (parallel, series, waterfall…). Node.js Async Tutorial - Justin Klemm. I’ve been doing a lot of backend development in Node.js recently. 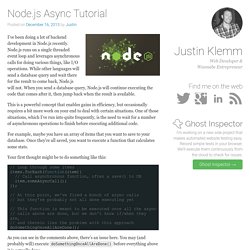 Node.js runs on a single threaded event loop and leverages asynchronous calls for doing various things, like I/O operations. While other languages will send a database query and wait there for the result to come back, Node.js will not. When you send a database query, Node.js will continue executing the code that comes after it, then jump back when the result is available. This is a powerful concept that enables gains in efficiency, but occasionally requires a bit more work on your end to deal with certain situations. One of those situations, which I’ve run into quite frequently, is the need to wait for a number of asynchronous operations to finish before executing additional code. For example, maybe you have an array of items that you want to save to your database. Your first thought might be to do something like this: Node-parallel. Parallel provide a simple way for management of parrallel async/sync call. 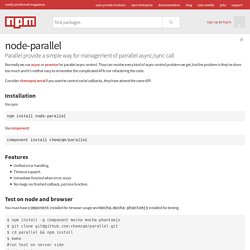 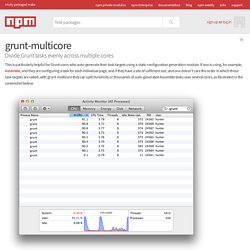 If one is using, for example, Assemble, and they are configuring a task for each individual page, and if they have a site of sufficient size, and one doesn't care the order in which those task targets are called, with grunt-multicore they can split hundreds or thousands of auto-generated Assemble tasks over several cores, as illustrated in the screenshot below: Rationale. MongoDB Blog. By Mike O’Brien, MongoDB Kernel Tools Lead and maintainer of Mongo-Hadoop, the Hadoop Adapter for MongoDB Hadoop is a powerful, JVM-based platform for running Map/Reduce jobs on clusters of many machines, and it excels at doing analytics and processing tasks on very large data sets. 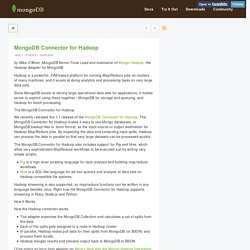 How it Works How the Hadoop connector works. FAQ: Concurrency — MongoDB Manual 2.6.7. IJEIT1412201310_20.pdf. Paul Done's Technical Blog: How to speed up MongoDB Aggregation using Parallelisation. A little while ago, Antoine Girbal wrote a great blog post describing how to speed up a MonogDB MapReduce job by 20x. 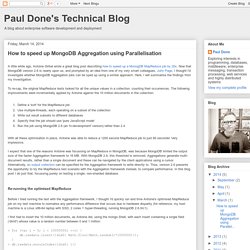 Now that MongoDB version 2.6 is nearly upon us, and prompted by an idea from one of my very smart colleagues, John Page, I thought I'd investigate whether MongoDB Aggregation jobs can be sped up using a similar approach. Here, I will summarise the findings from my investigation. To re-cap, the original MapReduce tests looked for all the unique values in a collection, counting their occurrences.

The following improvements were incrementally applied by Antoine against the 10 million documents in the collection: I expect that one of the reasons Antoine was focussing on MapReduce in MongoDB, was because MongoDB limited the output size of the faster Aggregation framework to 16 MB. Re-running the optimised MapReduce I then ran Antoine's fully optimised MapReduce job, which completed in 32 seconds, versus 63 seconds on Antoine's host machine.

Strawman:data_parallelism. This proposal describes a gentle extension to EcmaScript that will enable access to the parallelism found in modern processors. 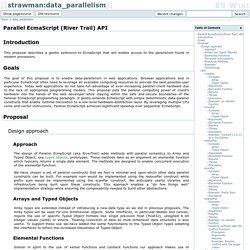 The goal of this proposal is to enable data-parallelism in web applications. Browser applications and in particular EcmaScript often need to leverage all available computing resources to provide the best possible user experience. Today web applications do not take full advantage of ever increasing parallel client hardware due to the lack of appropriate programming models. This proposal puts the parallel computing power of client’s hardware into the hands of the web developer while staying within the safe and secure boundaries of the familiar EcmaScript programming paradigm. Home · IntelLabs/RiverTrail Wiki. Home · PureMVC/puremvc-js-multicore-framework Wiki. JXcore: The V8 engine supported multithreading programming language. With the V8 JIT compiler, Node.js can interpret scripts in JavaScript and is protocol-independent, can use HTTP to serve HTML pages or other protocols for other types of applications. 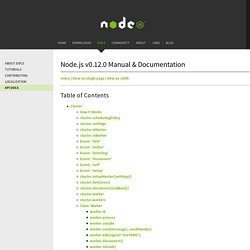 Coder's Block Blog / Multi-Threaded JavaScript with Web Workers. Web workers let you write true multi-threaded JavaScript, meaning different bits of your code can be running at the same time. Without web workers, all code runs on the UI thread. Even things that seem multi-threaded, like ajax callbacks, setTimeout and setInterval, are actually single threaded. They may be time delayed, but once they’re running, everything else has to wait its turn. Jquery - How to do Threading in Javascript. Multi-threading in JavaScript. Okay, before we begin, let me come clean and admit that the title of this article is a little sensationalist! JavaScript doesn’t really have multi-threading capabilities, and there’s nothing a JavaScript programmer can do to change that. In all browsers – apart from Google Chrome – JavaScript runs in a single execution thread, and that’s just how it is.

However, what we can do is simulate multi-threading, insofar that it gives rise to one of the benefits of a multi-threaded environment: it allows us to run extremely intensive code. This is code which would otherwise freeze-up the browser and generate one of those “unresponsive script” warnings in Firefox. Time Waits for No One It all hinges on the use of asynchronous timers. Effectively, a piece of code inside a for iterator is asking the interpreter to do everything straight away: “run this code n times as fast as possible.” Multithread.js. In-browser multithreading made easy. Run any business logic you like without interrupting the user experience. Multithread is a simple wrapper that eliminates the hassle of dealing with Web Workers and transferrable objects.

Run any code you'd like asynchronously, in its own thread, without interrupting the user experience. 5.5 Event-driven Concurrency. We have already got to know the concept of event-driven architectures in chapter 4. Although event-driven programming does not represent a distinct concurrency model per se, the concepts of event loops and event handlers and their implementations have strong implications on concurrent programming. Events and event handlers are often confused with messages and actors, so it is important to point out that both concepts yield similar implementation artifacts. However, they do not have the exactly same conceptual idea in common.