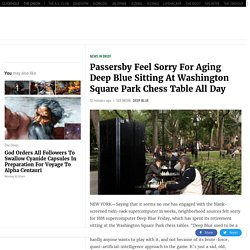 “Deep Blue used to be a legend, right up there with Nate Archibald and ‘Sweet P’ Plummer. Today, hardly anyone wants to play with it, and not because of its brute-force, quasi-artificial-intelligence approach to the game. It’s just a sad, old, washed-up box to these kids,” said park regular Natalie Bryant, who described watching disinterested park-goers walk right past the electronic chess player without recognizing the formerly beloved world champion. “You just feel so bad for Deep Blue. Icy molecules hold 25,000 gigabytes in a space the size of a quarter. A team from the University of Manchester has made a major breakthrough in the field of molecular data storage proving that high volumes of data can effectively be stored in individual molecules. 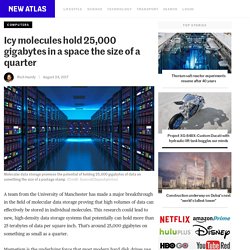 This research could lead to new, high-density data storage systems that potentially can hold more than 25 terabytes of data per square inch. That's around 25,000 gigabytes on something as small as a quarter. Magnetism is the underlying force that most modern hard disk drives use to store data. A Beginner's Guide to Automating Your Life. IFTTT (If This Then That) and Flow are both incredibly useful apps that are also pretty hard to describe. 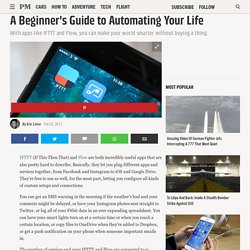 Basically, they let you plug different apps and services together, from Facebook and Instagram to iOS and Google Drive. They're free to use as well, for the most part, letting you configure all kinds of custom setups and connections. You can get an SMS warning in the morning if the weather's bad and your commute might be delayed, or have your Instagram photos sent straight to Twitter, or log all of your Fitbit data in an ever-expanding spreadsheet. You can have your smart lights turn on at a certain time or when you reach a certain location, or copy files to OneDrive when they're added to Dropbox, or get a push notification on your phone when someone important emails in.

Advertisement - Continue Reading Below Getting started with IFTTT. New chip could bring voice command to almost anything. We're growing more accustomed to the idea of talking to our devices, thanks to the success of products like Amazon Echo and Google Home, not to mention Apple's Siri voice assistant. 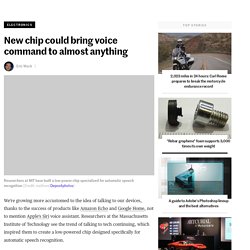 Researchers at the Massachusetts Institute of Technology see the trend of talking to tech continuing, which inspired them to create a low-powered chip designed specifically for automatic speech recognition. The engineers believe the new chip could mean power savings of 90 to 99 percent compared to a typical cellphone from today running speech recognition software. Theconversation. The latest chip in the iPhone 7 has 3.3 billion transistors packed into a piece of silicon around the size of a small coin. 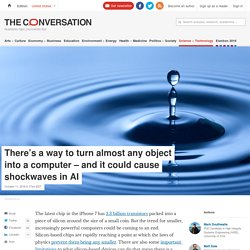 But the trend for smaller, increasingly powerful computers could be coming to an end. Mitsubishi develops real-time data analysis system for crowd safety. Mitsubishi Electric has developed a new technology that could help avert accidents at crowded events. 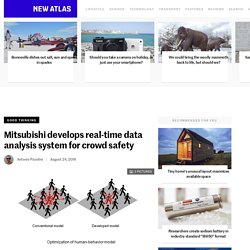 The system analyzes data from surveillance cameras to provide real-time estimates and predictions of crowd congestions on pathways leading in and out of venues. The technology was developed in collaboration with the Research Center for Advanced Science and Technology of Tokyo University (RCAST). Kristian Knobloch's Ping system is a digital house manual for Airbnb guests. Graduate shows 2016: Royal College of Art graduate Kristian Knobloch has created a system of smartphone touchpoints that help Airbnb hosts give guests extra information about their home (+ movie). 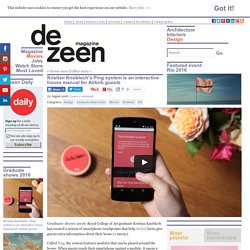 Called Ping, the system features modules that can be placed around the house. When guests touch their smartphone against a module, it opens a web page on their device, providing them with more information about their surroundings. Designed to be a "digital and interactive guide book", Ping lets absent hosts communicate essential information about their homes, like how to use the coffee machine or TV, or checkout requirements. The modules can also function as a guide to the surrounding area, including recommendations for restaurants or shopping. Homeowners can record videos or voice notes to welcome guests, or explain more complex details. "The sharing economy has lastingly influenced our society," Knobloch told Dezeen. Pilot earpiece targets language barriers with live conversation translation. From the Hitchhiker's Guide to the Galaxy's Babel fish to Star Trek's universal translator, science fiction has found ways to break down the intergalactic language barriers, but it's something those of us in the real world are still struggling with. 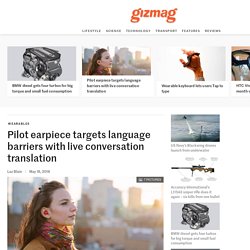 Smarter activity tracker knows when you're just pretending to work out. Tricking your fitness tracker into logging a workout when you are in fact just laying on the couch seems like a fairly futile exercise, but there's more to the equation than just fooling yourself. 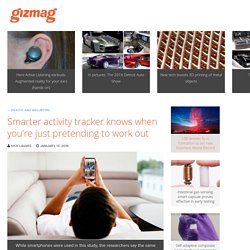 Insurers and health care providers are increasingly relying on tracking data to offer incentives, reduced premiums and keep tabs on clients behavior. This is cause for concern for one team of US researchers, which has developed an activity tracking smartphone app that can better distinguish between real and imitated physical movement. Fitness trackers such as Fitbit and Jawbone that monitor things like heart rate and the amount of steps taken have become a useful tool for health insurers looking for a competitive advantage. 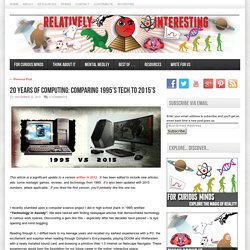 It has been edited to include new articles, ads, some nostalgic games, reviews, and technology from 1995. It’s also been updated with 2015 numbers, where applicable. If you liked the first version, you’ll probably like this one too. I recently stumbled upon a computer science project I did in high school (back in 1995) entitled “Technology in Society”. Are sound waves a better way to move data? Researchers from the University of Leeds and Sheffield University have created a way to move data through magnetic nanowires by using surface acoustic waves as the motivating force. Being developed for use in so-called racetrack solid-state memory, the researchers claim that using sound waves for data transfer should markedly increase computer processing speeds while vastly reducing power consumption. Gesture Mouse by SwiftPoint. Surface Book - The ultimate laptop. "Designless" brain-like chips created through artificial evolution.

Scientists at the University of Twente in the Netherlands have devised a new type of electronic chip that takes after the human brain. Their device is highly power-conscious, massively parallel, and can manipulate data in arbitrary ways – even though it doesn't need to be explicitely designed to perform any task. The Asus Vivostick. Parallella: supercomputing for the masses? A Kickstarter campaign seeking to build a US$99 "supercomputer for everyone" saw its funding target of $750,000 comfortably met on Saturday, raising just shy of $900,000 in pledges. The Parallella is billed by its designers at Adapteva as an affordable, open and easy parallel computing platform based on the company's own multicore Epiphany chips.

It's perhaps more realistic to think of Parallella as a highly efficient piece of parallel computer engineering rather than a supercomputer. Though the term supercomputer is ill-defined, the word tends to conjure images of room-filling, petaflop-crunching mainframes (though the term mainframe is hardly more concrete). Ultrathin, flexible PaperTab redefines tablet form and function. Despite their portability and popularity, the slab of glass form factor of tablets has its downsides. Most notably for the less coordinated among us is the propensity for the display to crack or shatter when dropped. A team at Canada’s Queen’s University working in collaboration with Intel Labs and Plastic Logic is looking not only to redefine the tablet's form, but the way people use them with the development of a flexible touchscreen computer called the PaperTab. View all The PaperTab features plastic transistor technology developed by Plastic Logic that we’ve previously seen in that company’s Plastic Logic Reader and QUE ProReader.

With Plastic Logic having now turned from manufacturing its own e-Readers to partnering with other companies, the PaperTab is powered by a second generation Intel core i5 processor and boasts a 10.7-inch, high resolution E-ink touchscreen display that is flexible, shatterproof and looks and feels like a sheet of paper. Tiny DNA Switches Aim To Revolutionize 'Cellular' Computing. If you think programming a clock radio is hard, try reprogramming life itself. That's the goal of Drew Endy, a synthetic biologist at Stanford University. Endy has been working with a laboratory strain of E. coli bacteria.

He sees the microbes as more than just single-cell organisms. Rebuilding A New Internet Using Meshnets. TellSpec hand-held scanner identifies what's in your food. IBM’s bionic computers bleed electronic blood. In the 1950s, the highest priority for national defense was the Air Force ballistic missile program. The ICBM, and therefore the entire space program, and the internet, were made possible by the IBM 360 mainframe computer and its immediate predecessors. Empa invents chemical computer faster than a satnav. Engineers create a computer with a water droplet processor.