NecTouch : A Multitouch Tuio Server using the Kinect. Multitouch input for Processing/Kinect. Kinect Mouse Cursor - Home. Painting with Kinect « Ken’s Blog. This evening I finally got around to implementing a simple paint program with the Microsoft Kinect. 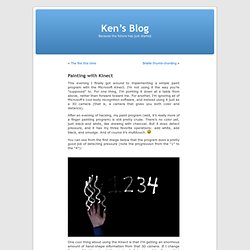 I’m not using it the way you’re “supposed” to. For one thing, I’m pointing it down at a table from above, rather than forward toward me. For another, I’m ignoring all of Microsoft’s cool body recognition software, and instead using it just as a 3D camera (that is, a camera that gives you both color and distance). After an evening of hacking, my paint program (well, it’s really more of a finger painting program) is still pretty crude.

There’s no color yet, just black and white, like drawing with charcoal. You can see from the first image below that the program does a pretty good job of detecting pressure (note the progression from the “1″ to the “4″): Using the Kinect with Processing - Learning. Drawing With Kinect. Thursday, July 14th, 2011 This application, Kinect Paint, is a lot of fun to play around with. 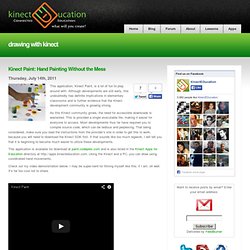 Although developments are still early, this undoubtedly has definite implications in elementary classrooms and is further evidence that the Kinect development community is growing strong. As this Kinect community grows, the need for accessible downloads is warranted. This is provided a single executable file, making it easier for everyone to access. Most developments thus far have required you to compile source code, which can be tedious and perplexing. This application is available for download at paint.codeplex.com and is also listed in the Kinect Apps for Education directory at Using the Kinect and a PC, you can draw using coordinated hand movements. Check out my video demonstration below. Direct video link. A community based site focusing on development and programming for the Microsoft Kinect 3D depth sensor.

Using Kinect to draw 3D AutoCAD polylines. As promised in this previous post, I’ve been playing around with understanding Kinect gestures inside AutoCAD. 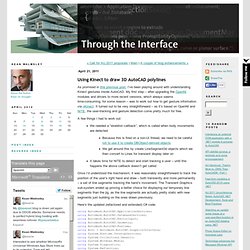 My first step – after upgrading the OpenNI modules and drivers to more recent versions, which always seems time-consuming, for some reason – was to work out how to get gesture information via nKinect. It turned out to be very straightforward – as it’s based on OpenNI and NITE, the user-tracking and gesture detection come pretty much for free.

Once I’d understood the mechanism, it was reasonably straightforward to track the position of the user’s right hand and draw – both transiently and more permanently – a set of line segments tracking the hand’s movement. The Transient Graphics sub-system ended up proving a better choice for displaying our temporary line segments than the jig, as the line segments are actually pretty static with new segments just building on the ones drawn previously. using Autodesk.AutoCAD.ApplicationServices; using Autodesk.AutoCAD.DatabaseServices; Kinect Graffiti : 3D drawing tool where you are the “brush”. Artist Jean-Christophe Naour has created a gestural based drawing tool using a hacked kinect, he calls the project “kinect graffiti”: The project intends to not only be a drawing tool, but to examine the way that the body moves while creating graff pieces. 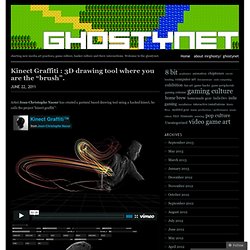 Kinect Graffiti allows Naour to take the real time 3d information and “pause” it allowing him to move the images around and examine the arcs, sweeps and other movements involved in the process. Kinect Graffiti, 3D Drawing System That Turns Artist Into Paintbrush. Kinect3d1 - 3d drawing in processing with the microsoft kinect sensor. Getting Joint Position in 3D Space from the Kinect - Learning. This tutorial will demonstrate how to get the position of individual joints in 3D space. 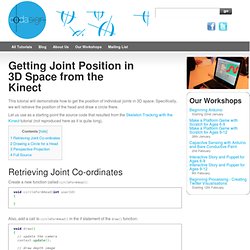 Specifically, we will retrieve the position of the head and draw a circle there. Drawing with a Kinect. 2012 : Xrispy Collective. Sparkling on Kinect with 3d finger drawing. First tests with Kinect - gestural drawing in 3D. Yes I'm playing with hacking Kinect :) The XBox Kinect is connected to my Macbook Pro, and I wrote a little demo to analyse the depth map for gestural 3D interaction. 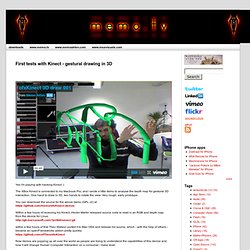 One hand to draw in 3D, two hands to rotate the view. Very rough, early prototype. You can download the source for the above demo (GPL v2) Within a few hours of receiving his Kinect, Hector Martin released source code to read in an RGB and depth map from the device for Linux. within a few hours of that Theo Watson ported it to Mac OSX and release his source, which - with the help of others - became an openFrameworks addon pretty quickly. Now demos are popping up all over the world as people are trying to understand the capabilities of this device and how it will change Human Computer Interaction on a consumer / mass level. <div class="disqus-noscript"><a href=" the discussion thread. 3D drawing using OpenKinect on OS X. 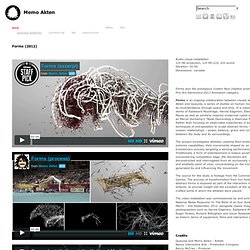 Forms is an ongoing collaboration between visuals artists Memo Akten and Quayola, a series of studies on human motion, and its reverberations through space and time. It is inspired by the works of Eadweard Muybridge, Harold Edgerton, Étienne-Jules Marey as well as similarly inspired modernist cubist works such as Marcel Duchamp’s “Nude Descending a Staircase No.2″. Rather than focusing on observable trajectories, it explores techniques of extrapolation to sculpt abstract forms, visualizing unseen relationships – power, balance, grace and conflict – between the body and its surroundings. 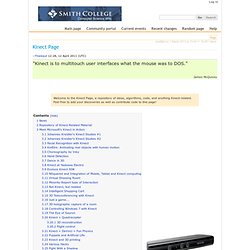