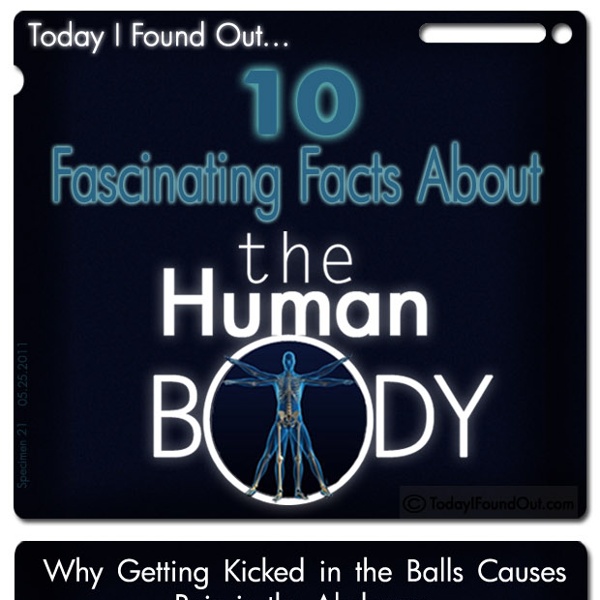 The Genetic Gamesmanship of a Seven-Sexed Creature What could be better than two types of sexes? For one organism, the answer isn’t three, but seven! And to top it off, these seven sexes aren’t evenly distributed in a population, although researchers have now developed a mathematical model that can accurately estimate the probabilities in this crap-shoot game of sexual determination. Meet Tetrahymena thermophila, which in addition to its seven different sexes—conveniently named I, II, III, IV, V, VI, and VII—has such a complex sex life that it requires an extra nucleus. This fuzzy, single-celled critter has a larger macronucleus that takes care of most cellular functions and a smaller micronucleus dedicated to genetic conjugation.

Scientists unveil tools for rewriting the code of life MIT and Harvard researchers have developed technologies that could be used to rewrite the genetic code of a living cell, allowing them to make large-scale edits to the cell’s genome. Such technology could enable scientists to design cells that build proteins not found in nature, or engineer bacteria that are resistant to any type of viral infection. The technology, described in the July 15 issue of Science, can overwrite specific DNA sequences throughout the genome, similar to the find-and-replace function in word-processing programs. Using this approach, the researchers can make hundreds of targeted edits to the genome of E. coli, apparently without disrupting the cells’ function. “We did get some skepticism from biologists early on,” says Peter Carr, senior research staff at MIT’s Lincoln Laboratory (and formerly of the MIT Media Lab), who is one of the paper’s lead authors.

Cranial Nerves Can't remember the names of the cranial nerves? Here is a handy-dandy mnemonic for you: On Old Olympus Towering Top AFamous Vocal German Viewed Some Hops. 47 Mind-Blowing Psychology-Proven Facts You Should Know About Yourself I’ve decided to start a series called 100 Things You Should Know about People. As in: 100 things you should know if you are going to design an effective and persuasive website, web application or software application. Or maybe just 100 things that everyone should know about humans! The order that I’ll present these 100 things is going to be pretty random. So the fact that this first one is first doesn’t mean that’s it’s the most important.. just that it came to mind first. Dr.

Scientists May Have Discovered The Real Cause Of Addiction Addiction is currently defined as a chemical dependency caused entirely by the way the body reacts to a certain substance. But Johann Hari, author of “Chasing The Scream: The First and Last Days of the War on Drugs,” believes it is a vital element of one’s life that drives a person to addiction. He recalls seeing an anti-drug commercial in the 1980s featuring an old experiment in which a rat was placed in a cage with two water bottles. One bottle contained pure water while the other was laced with heroin or cocaine. The rat became addicted to the second bottle and drank until it died.

Mutated DNA Causes No-Fingerprint Disease Almost every person is born with fingerprints, and everyone's are unique. But people with a rare disease known as adermatoglyphia do not have fingerprints from birth. Affecting only four known extended families worldwide, the condition is also called immigration-delay disease, since a lack of fingerprints makes it difficult for people to cross international borders. In an effort to find the cause of the disease, dermatologist Eli Sprecher sequenced the DNA of 16 members of one family with adermatoglyphia in Switzerland . Seven had normal fingerprints, and the other nine did not.

10 Simple Postures That Boost Performance Psychological research suggests simple actions can project power, persuade others, increase empathy, boost cognitive performance and more… We tend to think of body language as something that expresses our internal states to the outside world. But it also works the other way around: the position of our body also influences our mind. As the following psychological research shows, how we move can drive both thoughts and feelings and this can boost performance. 1. Pose for power

How Psychoanalysis Differs from Psychotherapy The talking cure Psychotherapy is a rather generic term – social workers, counselors, psychologists and psychiatrists can all call themselves therapists. Psychoanalysis is an experience – you cannot call yourself a psychoanalyst without having done your own analysis.

Rare and Precious Moments of Animal Life How interesting can animal life be is something which we can only guess. By looking these amazing photographs it seems that they have very funny and precious moments. Would you like to be monkey, or elephant, or maybe cat sometimes? Don’t worry if you do because this has happened all of us at least ones, for now enjoy these rare photos! Visible Proofs: Forensic Views of the Body: Galleries: Media: Autopsy WARNING: Some people may find images from actual postmortem dissections disturbing. Viewer discretion advised. Videos on this page require either QuickTime Player or Windows Media Player. Postmortem dissection, or autopsy, was among the first scientific methods to be used in the investigation of violent or suspicious death. Autopsy remains the core practice of forensic medicine.

Interesting dream facts Posted on February 2, 2012 in Bizarre If you’re new here, you may want to subscribe to our RSS feed or follow us on Facebook or Twitter . Thanks for visiting! Rate this Post Loading ... The Ten Biggest Mistakes Psychiatrists Make 1. Talk too much It’s not a conversation, and it’s not a debate. You are either treating their symptoms with medication, or guiding them to “treat” their own symptoms. Neither requires much talking.