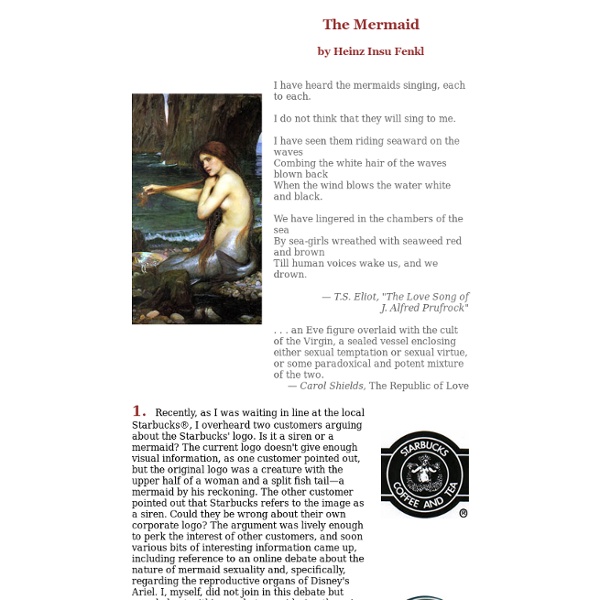 About the Author: Heinz Insu Fenkl is the author of Memories of My Ghost Brother and other works. For more information, please visit his Endicott bio page Copyright © 2003 by Heinz Insu Fenkl. This article first appeared in Realms of Fantasy magazine, 2003 . This material may not be reproduced in any form without the author's express written permission.

Mysterious Myths About Mermaids There have been recorded sightings from fishermen, women, men of reputation within the community of mermaids and mermen. Some are quite convincing while others are a little vague. Nonetheless they make a good reading. The most recent sighting is of 1947 when an eighty-year-old fisherman reported that he had seen a mermaid ‘in the sea about twenty yards from the shore, sitting combing her hair on a floating herring box used to preserve live lobsters. Unfortunately, as soon as the mermaid looked round, she realized that she had been seen, and plunged into the sea. Myth, Legend, Folklore, Ghosts Apollo and the Greek Muses Updated July 2010 COMPREHENSIVE SITES ON MYTHOLOGY ***** The Encyclopedia Mythica - SEARCH - Areas - Image Gallery - Genealogy tables - Mythic Heroes Probert Encyclopaedia - Mythology Gods, Heroes, and MythDictionary of Mythology What is Myth?

The Mysterious Plain of Jars Often referred to as â€œan Asian version of Stonehengeâ€, the Plain of Jars is one of the most enigmatic sights on Earth. Shrouded in mystery and myth, this ancient place has fascinated archeologists and scientists ever since its discovery. [Photo Credits] Thousands of giant stone jars scattered around the Xieng Khouang plain, in Laos form one of the most bizarre archeological collections in history. Although it has been determined they are over 2000 years old, no one has yet been able to determine who built them and for what purpose. Cold-Brewed Iced Coffee Update 4/2014: Be sure to check out my new, improved cold-brewed iced coffee tutorial with step-by-step instructions and lessons learned since first posting about cold-brewed iced coffee. I started making my iced coffee this way a couple of years ago, thanks to this New York Times recipe that convinced me to do so. You add coffee grounds to cold water and let it sit at room temperature for several hours. Then you strain it through a coffee filter, and the result is a deep, rich, dark, and caffeine-packed glass of iced coffee. It’s a concentrate, so you’ll want to dilute it with water unless you’re in need of a serious buzz. And trust me – this stuff can pack a serious wallop.

Thessalonike of Macedon Life[edit] Thessalonike was born around 352 or 345 BC.[4][5] To commemorate the birth of his daughter, which fell on the same day as the armies of Macedon and Thessalian league won the significant battle of Crocus Field in Thessaly over the Phocians, King Philip is said to have proclaimed, "Let her be called victory in Thessaly". In the Greek language her name is made up of two words Thessaly and nike, that translates into 'Thessalian Victory'.[6] Her mother did not live long after her birth and upon her death Thessalonike appears to have been brought up by her stepmother Olympias. In memory of her close friend, Nicesipolis, the queen took Thessalonike to be raised as her own daughter.

Scientific Curiosity Captured in Photos Caleb Charland is a Maine-based photographer who combines a love of scientific experiments and photographs into wonderful and amazing photographs. If Isaac Newton or Benjamin Franklin were into photography, their photographs might look something like these: “Wooden Box with Horseshoe Magnet” Tutorials for Recycling T-Shirts So way way back, in June, I wrote this Studio Organization post, about starting the process of organizing my studio by cleaning out the closet full of junk. Well, it's September and...let's just say the closet is a work in progress. Some of the things that are taking up space in the closet are shirts that I never wear anymore.

Child Labor in America: Investigative Photos About these Photos Faces of Lost Youth Left - Furman Owens, 12 years old. Wipe Off Weekly Menu Board I am a meal planner. I refuse to go grocery shopping without my week’s worth of meals planned out and list made. (It’s either that or wander aimlessly around the grocery store for two hours and then make ten more trips back during the week to get things I forgot.) Once I get the groceries unloaded, I usually forget what I planned for, so I put together this super easy wipe-off menu board to keep track of what’s for dinner each night! Robot Bear Rampage Felt like drawing with a dry erase marker today. Here is a gigantic robot bear rampaging through a city. "Robot Bear Rampage" - dry erase marker on paper - 18" x 13" All work © Lawrence Yang 2009 my blog | my site | purchase inquries