Visualize This: How to Tell Stories with Data 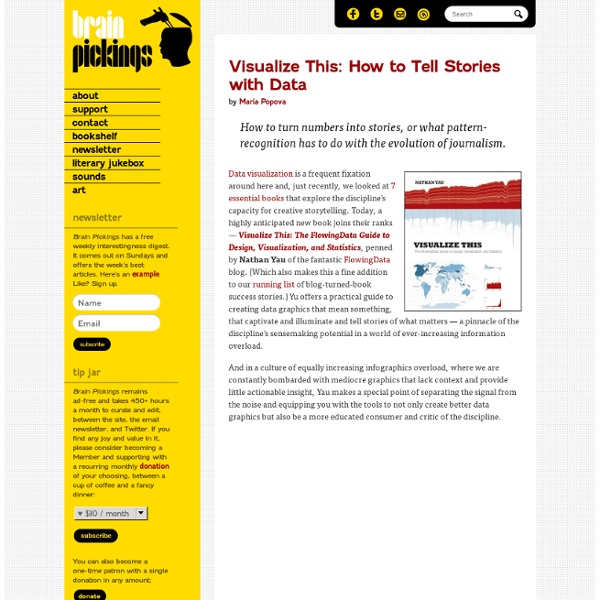 by Maria Popova How to turn numbers into stories, or what pattern-recognition has to do with the evolution of journalism. Data visualization is a frequent fixation around here and, just recently, we looked at 7 essential books that explore the discipline’s capacity for creative storytelling. And in a culture of equally increasing infographics overload, where we are constantly bombarded with mediocre graphics that lack context and provide little actionable insight, Yau makes a special point of separating the signal from the noise and equipping you with the tools to not only create better data graphics but also be a more educated consumer and critic of the discipline. From asking the right questions to exploring data through the visual metaphors that make the most sense to seeing data in new ways and gleaning from it the stories that beg to be told, the book offers a brilliant blueprint to practical eloquence in this emerging visual language. Donating = Loving Share on Tumblr

OpenBible.info Color as Data: Visualizing Color Composition by Maria Popova Abstracting glossy magazines, or what pie charts have to do with the Mona Lisa. We love data visualization and color. Computational artist Mario Klingemann, a.k.a. The pie charts represent the distribution of dominant colors within a circle area. Designer Shahee Ilyas‘ amusingly minimalist deconstruction of country flags by color composition is an absolute treat. Besides the playful irreverence, the project reveals some curious patterns of color choice, raising even more curious questions about color symbolism. Data viz superheroes Martin Wattenberg and Fernanda Viegas have taken their visualization magic to the world of fashion photography. To create the images in luscious, we began with a series of magazine advertisements for luxury brands. Brain Pickings has a free weekly newsletter and people say it’s cool. Share on Tumblr

Startup Lessons From The Ink-Stained Trenches Startup founders and news reporters have more in common than being stereotypically broke. Before the music and airplanes and space ships, billionaire tycoon Richard Branson’s first business was a magazine, of which Branson was editor-in-chief. Before launching the now $2.5 billion fashion company, Banana Republic’s founder was a journalist. Where the skills of business and journalism overlap, entrepreneurship is often found. Columbia Journalism School, founded by Joseph Pulitzer in 1912, lists 40 startups launched by its students in the last five years, including AllThingsD, Spot.us (a news-focused progenitor to Kickstarter), and Vayable. "Journalists hone... reporting muscles that are hugely helpful for entrepreneurship,” says Jeremy Caplan, Director of Education at CUNY’s Center for Entrepreneurial Journalism. I’ve made surprising use of my journalism training in running my own startup, Contently. Here are cues every entrepreneur should take from journalists: Ask good questions.

Meet the Data Brains Behind the Rise of Facebook | Wired Enterprise Facebook’s Jay Parikh. Photo: Ariel Zambelich/Wired Jay Parikh sits at a desk inside Building 16 at Facebook’s headquarters in Menlo Park, California, and his administrative assistant, Genie Samuel, sits next to him. Parikh is Facebook’s vice president of infrastructure engineering. The trouble is that the Facebook infrastructure now spans four data centers in four separate parts of the world, tens of thousands of computer servers, and more software tools than you could list without taking a deep breath in the middle of it all. But that’s why Parikh and his team build tools like Scuba. “It gives us this very dynamic view into how our infrastructure is doing — how our servers are doing, how our network is doing, how the different software systems are interacting,” Parikh says. In the nine years since Mark Zuckerberg launched Facebook out of his Harvard dorm room — Monday marks the anniversary of the service — it has evolved into more than just the world’s most popular social network.

FORM+CODE: Eye and Brain Candy for the Digital Age by Maria Popova Computational aesthetics, or what typography has to do with Yoko Ono and Richard Dawkins. Yes, we’re on a data visualization spree this week, but today’s spotlight taps into an even more niche obsession: data viz book candy. This season, Princeton Architectural Press, curator of the smart and visually gripping, brings us FORM+CODE — an ambitious, in-depth look at the use of software across art, design and illustration for a wide spectrum of creative disciplines, from data visualization to generative art to motion typography. The nature of form in the digital age is trapped in the invisible realm of code. Elegant and eloquent, compelling yet digestible, the tome — dubbed “a guide to computational aesthetics” — offers a fine piece of eye-and-brain stimulation for the age of digital creativity. Thanks, Julia Brain Pickings has a free weekly newsletter and people say it’s cool. Share on Tumblr

The problem with "global warming" We are facing what might be the greatest threat ever to the future of mankind. And yet no one is marching in the streets, the outrage is largely intellectual and action is slow. (If you want to argue about the science, please visit the link above, this is a post about the marketing!) Is the lack of outrage because of the population's decision that this is bad science or perhaps a thoughtful reading of the existing data? Actually, the vast majority of the population hasn't even thought about the issue. The muted reaction to our impending disaster comes down to two things: 1. the name. Global is good.Warm is good.Even greenhouses are good places. How can "global warming" be bad? I'm not being facetious. 2. the pace and the images. One degree every few years doesn't make good TV. Lady Bird Johnson understood this when she invested her efforts into a campaign against litter and pollution. Doesn't matter what you market.

Wonga, Lenddo, Lendup: Big data and social-networking banking Photo by Johannes Simon/Getty Images The buzzword tsunami that is “big data"—a handy way of describing our vastly improved ability to collect and analyze humongous data sets—has dwarfed “frictionless sharing” and “cloud computing” combined. As befits Silicon Valley, “big data” is mostly big hype, but there is one possibility with genuine potential: that it might one day bring loans—and credit histories—to millions of people who currently lack access to them. But what price, in terms of privacy and free will (not to mention the exorbitant interest rates), will these new borrowers have to pay? In the not so distant past, the lack of good and reliable data about applicants with no credit history left banks little choice but to lump them together as high-risk bets. Thanks to the proliferation of social media and smart devices, Silicon Valley is awash with data. Similarly, the U.S. Social media is just the tip of the iceberg. Those without smartphones or Twitter accounts need not despair.

Symbol Signs: Helvetica Man and Beyond by Maria Popova A man and a woman walk into a sign, or what Helvetica has to do with slipping on ice. In 1974, the U.S. Department of Transportation commissioned AIGA to produce Symbol Signs — a standardized set of 34 symbols for the Interstate Highway System. Five years later, 16 more symbols were added to complete what’s become known as “the Helvetica of pictograms” — a 50-piece symbol set so iconic and universally pervasive it has become an integral part of our visual language. But beyond their practical application, Symbol Signs have amassed a cultish following in the design community, generating derivative work ranging from the quirky to the wildly creative. Artist Iain Anderson’s symbol-based short film, Airport, was a finalist in the 2005 Sydney Film Festival. A few weeks ago, we tweet-raved about Symbolic Gestures — a wonderful exposé on all the creative ways in which the National Park Service has adapted the iconic symbols to convey a wide and incredibly rich range of contexts.

7 Essential Books on Data Visualization & Computational Art by Maria Popova What 12 million human emotions have to do with civilian air traffic and the order of the universe. I’ve spent the past week being consistently blown away at the EyeO Festival of data visualization and computational arts, organized by my friend Jer Thorp, New York Times data artist in residence, and Dave Schroeder of Flashbelt fame. Processing, the open-source programming language and integrated development environment invented by Casey Reas and Ben Fry in 2001, is easily the most fundamental framework underpinning the majority of today’s advanced data visualization projects. Recommended by: Casey Reas Since 2005, (a longtime Brain Pickings favorite) have been algorithmically scrobbling the social web to capture occurrences of the phrases “I feel” and “I am feeling” harvesting human sentiment around them by recording the full context in which the phrase occurs. Reviewed in full here. Recommended by: Jer Thorp Recommended by: Moritz Stefaner Recommended by: Wes Grubbs

The first law of mass media Organizations will work tirelessly to de-personalize every communication medium they encounter. Radio ads used to be live, personal and spoken by an individual.TV ads used to feature actual people, demonstrating something, usually live.Phone calls involved a live speaker, talking, with permission, to another person.Email used to be honest interactions between consenting adults.Facebook pages (and Wikipedia, too) were built by people, not staffs.Twits came from real people, and so did instant messages. One by one, the mass marketers have insisted on robocalling, spamming, jingling and lying their way into our lives. The pronoun morphs from "you" to "me" to "us" to "the corporation" ... The public works tirelessly to flee to actual interactions between real people, and our organizations work even more diligently (and with more leverage) to corporatize and anonymize the interactions. The irony, of course, is that an organization with guts can go in the opposite direction and win.