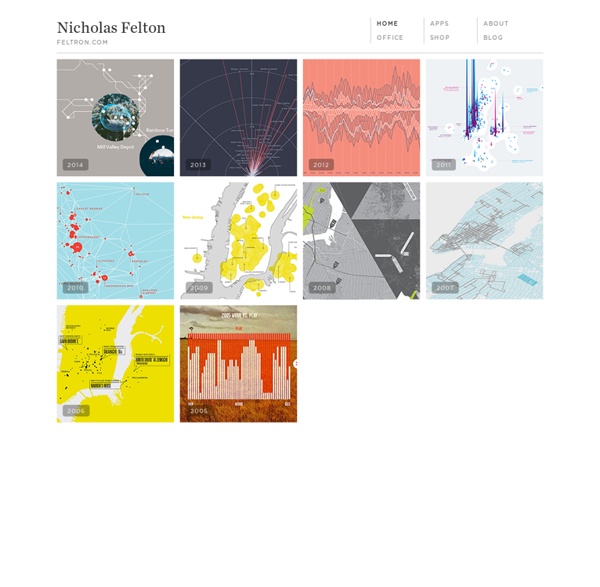 Saul Bass Designer Saul Bass Saul Bass (May 8, 1920 — April 25, 1996) was a graphic designer and filmmaker, perhaps best known for his design of film posters and title sequences. Awful Client Criticism Turned Into Posters EmailEmail If you’re a designer yourself, most of these postcards should ring a bell. Irish graphic designers Mark Shanley and Paddy Treacy, in collaboration with other ad creatives, designers, animators, directors, illustrators and more, created this ”Sharp Suits” series, based on their “favorite worst feedback” from clients. The creators say that the series has raised thousands of euros for charity – and must’ve provided the designers with a great outlet for some of their frustration.

Jed Carter — Eyes on The Sky I made a book. It documents my major self-initiated project this year: a process-based investigation into generative design and the weather. It’s a record of the sky, of the colours that change so slowly it’s almost impossible to see. A bit like a visual almanac. I linked 64 public-access web cameras across Europe, recording the colour of the sky, at each point, at regular intervals. Together, the cameras paint the weather, once every hour.

Smashing magazine Advertisement Data visualizations and infographics can make complex datasets easier to understand and comprehend. By creating a graphical represenatation of data and statistics, complicated concepts and information can make more sense in less time. Many visualizations focus on representing a specific set of data or statistical information. Others focus on less-concrete topics, providing a visual representation of abstract concepts.

SaaS Business Intelligence with Google Apps Drive business user adoption through intuitive Self-Service BI Evaluating BI products?Try this agnostic tool to evaluate over 150 features! Collaborate where critical business decisions are made Connect, Explore and Collaborate with Business Intelligence 3.0 Business Intelligence 3.0 Panorama is leading a BI 3.0 revolution and a creation of a new generation of BI solutions that enable organizations to leverage the power of Social Decision Making and Automated Intelligence to gain insights more quickly, more efficiently, and with greater relevancy. The New Theatre - The Sydney Office of Interbrand. Established in 1932, the New Theatre is a proudly independent theater in Sydney, Australia. “We’re not slick, we’re not refined and we don’t conform,” is only one of many statements it makes, “We believe in artistic and social expression, not just escapism. When we take the stage, we’re for real.” Or “We’re driven by passion, not money.” You get the point.

Upping Your Type Game Note: This text was created as a talk for An Event Apart in San Diego. It was presented Tuesday, May 21st 2013. Many thanks to Stephen Coles for his advising and light editing. While the full slide deck is not shown below, about a quarter of the original slides are used as editorial illustrations. To send comments or propose corrections (kind and helpful tone appreciated), email me. Data Visualization Katharine Morgan Tech blogs. They don’t agree on much. Apple Fanboys, Android Fanboys, Playstation Fanboys, Xbox Fanboys… the web is awash with people flaming each other about their choice of technology. If there’s one thing they do agree on however it’s that the time of Internet Explorer is over.