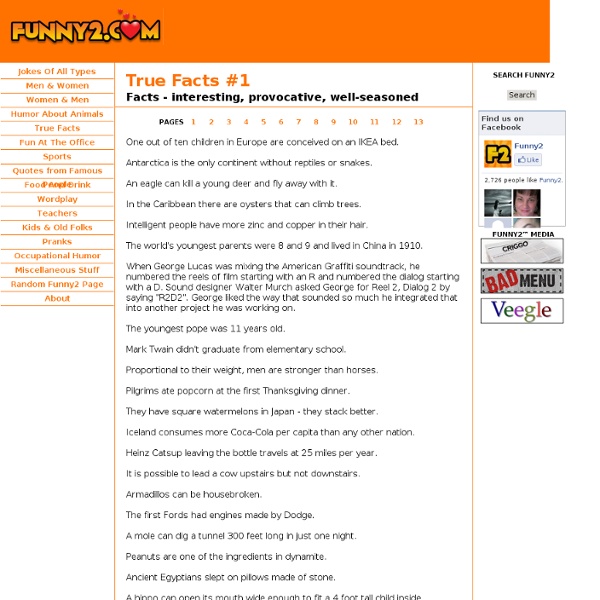 Facts - interesting, provocative, well-seasoned One out of ten children in Europe are conceived on an IKEA bed. Antarctica is the only continent without reptiles or snakes. An eagle can kill a young deer and fly away with it. In the Caribbean there are oysters that can climb trees. Intelligent people have more zinc and copper in their hair. The world's youngest parents were 8 and 9 and lived in China in 1910. When George Lucas was mixing the American Graffiti soundtrack, he numbered the reels of film starting with an R and numbered the dialog starting with a D. The youngest pope was 11 years old. Mark Twain didn't graduate from elementary school. Proportional to their weight, men are stronger than horses. Pilgrims ate popcorn at the first Thanksgiving dinner. They have square watermelons in Japan - they stack better. Iceland consumes more Coca-Cola per capita than any other nation. Heinz Catsup leaving the bottle travels at 25 miles per year. It is possible to lead a cow upstairs but not downstairs.

7 Must See Strangest Gadgets First time here? I hope you'll consider subscribing via RSS or email (it's free). Thanks for visiting! Flying Alarm Clock Party Playlist Ratings from "Mobile Beat Magazine and DJ Intelligence" Popular First Dances Unforgettable (Nat King Cole) Can't Help Falling In Love (Elvis Presley) Can I Have This Dance? (Ann Murray) The Way You Look Tonight (Frank Sinatra) It Had To Be You (Harry Connick, Jr.) Won Park – The Master of Origami Paper Folding Origami is the traditional Japanese art of paper folding. The goal of this art is to create a representation of an object using geometric folds and crease patterns preferably without the use of gluing or cutting the paper, and using only one piece of paper. Won Park is the master of Origami. He is also called the “money folder”, a practitioner of origami whose canvas is the United States One Dollar Bill. Bending, twisting, and folding, Won Park creates life-like shapes inspired by objects living and not– both in stunning detail. One Dollar Koi

Videos Smosh Video about 8 hours ago Ian and Anthony want to have adventures like Finn on Adventure Time, so they head out and FIND adventure on their own. Saving princesses and challenging villains looks so easy in the cartoon! Funny behind the scenes moments, bloopers, deleted scenes, amazing slow-motion destruction, and more funny extras from Smosh’s Adventure Time video! Angry Birds in Lego Written by Thomas Baekdal | Tuesday, January 18, 2011 It was only a matter of time. You already got Angry Birds for your iPhone, iPad, Mac, Andriod, Windows computer, Nokia phone, as a plush toy, and a iPhone case. And now Tsang Yiu Keung has recreated them in Lego. Lego should sell this as a package, complete with functional sling and building blocks for building fortresses.

Bleach Kurosaki Ichigo Short Cosplay Wig Returns 1、 Returns must be made within 7 days of receiving orders. 2、 We will offer 100% refund only of products which are defected, or sent by mistake. Improve Your Google Search Skills [Infographic] - How-To Geek - StumbleUpon Don’t limit yourself to just plugging in simple search terms to Google; check out this infographic and learn a search string search or two. You don’t need to limit yourself to searching just for simple strings; Google supports all manner of handy search tricks. If you want to search just HowToGeek.com’s archive of XBMC articles, for example, you can plug in site:howtogeek.com XBMC to search our site. Get More Out of Google [HackCollege via Mashable]

Badass of the Week: Anthony Omari - StumbleUpon Anthony Omari Late on the night of January 23, 2012, a 24 year-old Kenyan uber-hero named Anthony Omari awoke to find three gigantic dudes with machetes standing over his bed. He knew right away that they weren't there to sell Girl Scout cookies or ask him for a jumping mid-air high-five. Most-Magical Things to Buy in Hogsmeade (and Some to Avoid) ORLANDO, Florida — The Wizarding World of Harry Potter brims with exclusive souvenirs and replicas that fans will recognize from the books and films. Some of them are awesome, but others aren’t worth a single Galleon. Here are just some of the wallet-busting tchotchkes available at the Universal Studios Orlando attraction, which opens Friday. Above: Dierdre Marshall, celebrating her 11th birthday at the park’s soft opening Thursday afternoon, gulps a Butterbeer ($2.50). The real-life version of Harry’s favorite drink isn’t alcoholic, but it is quite tasty, with butterscotch and shortbread flavors and a creamy head added on top.

Image of the Day: Aquarium Phonebooth - Lifestyle Lighting designer Benoit Deseille and artist Benedetto Bufalino transformed this phone booth in Lyon, France, into an aquarium, as part of the city's annual Festival of Light. In an accompanying statement, the artists explain the inspiration behind the piece: With the advent of the mobile telephone, telephone booths lie unused. We rediscover this glass cage transformed into an aquarium, full of exotically colored fish; an invitation to escape and travel. It's a creative way to transform disused infrastructure into an everyday source of wonder and beauty—or, if you're of a more pessimistic frame of mind, a vision of our climate-changed future. On top of that, there's something whimsically compelling about seeing tropical fish interacting with a phone: cross-species communication, anyone?

Mistaken Identity In 1903, a prisoner named Will West arrived at Leavenworth. The record clerk took the photographs above and, thinking he remembered West, asked whether he had been there before. West said no. The clerk took some measurements, went to the file, and produced this record, bearing the name William West: Amazed, the prisoner said, “That’s my picture, but I don’t know where you got it, for I know I have never been here before.” Incredibly, this was true. Barcode Yourself by Scott Blake Barcode Yourself is a complete, interactive experience in the series of barcode art, created using the personalized data of participants. Enter an individual's gender, weight, height, age and location, and the barcode is formed using real-world data. The individualized barcode can then be printed, mapped, scanned, even depicted on a t-shirt or coffee mug. Uber-geeks can even test out their barcodes on their next grocery run.