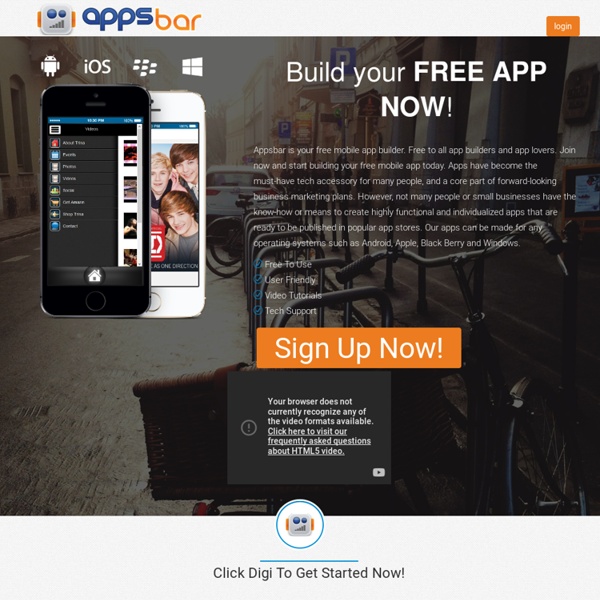 Do It Yourself: Create Your Own iOS or Android Apps - Buzztouch You don't need programming knowledge to build an iOS or Android app. Really. It might be the people lining up to get the new iPad that grab headlines, but those who want to develop and publish apps for the device are the ones who'll benefit most from its screen time. Whether it's on an iOS or Android device, mobile users now spend more time using apps than they do on the Web.

Ant's ICT By far the highlight for many of us at the NAACE Hot House event earlier this week was the presentation by Torsten Stauch from Appshed.com. Torsten put a good deal of effort into his presentation and made every attempt to show linkage between his online tool for making free web apps and the new NAACE Framework. Though his talk was interesting and a good attempt at linking curricula with product, it was the tool itself that excited us. It slowly dawned that this was a powerful and easy to use application that allowed users to drag and drop elements to form a usable and very credible web app. While Torsten spoke I tried this out and within ten minutes had made a daft but credible app that displayed a Youtube video in one tab, some news in another and a flickr photo set in another. All done by dragging and amending existing modules/ extensions from Appshed’s growing library of web building blocks.

Effective Mobile Content Strategy to Help your Content go Anywhere It is no secret that mobile phones are quickly becoming the number one marketing platform available. Almost every human being with a phone in their pocket will use it to search for content at some point during the day. If you are a tech-savvy business owner, you are probably already using content marketing to attract new customers. However, creating good content is only the first step in achieving success.

Hour of Code Scratch Holiday Card Before Decide when and how long The Hour of Code is a one-hour, hands-on introduction to computer science. It is part of Computer Science Education Week, which is taking place December 7th to 13th. But your Hour of Code can happen before, during, or after CSEd Week -- and you can easily tailor the activity to fit any time frame. Check computing resources Make sure there is an Internet-accessible computer for each student or pair of students in your class. If you do not have a reliable or easily accessible Internet connection, you can download Scratch and install it on each computer before the session. Pricing — Mobile apps for events, conferences and more Free No credit card required! Build one HTML5 app Ad-free up to 20 users Basic email support Get started Solo $9/month

How to build an Android app One of the strengths of the Android platform compared to iOS, for example, is that it has an open source basis, which makes it easier to produce your own applications and distribute them without waiting for a lengthy approval process. You can set up your own Android app on your PC as long as you have the right software installed, and you can even take it for a test drive using an Android emulator so you can see what it will look like when it's run on a smartphone. There are two techniques that you can use to produce Android applications with a PC. 29 iPad Resources, Tutorials, and Guides Every Teacher Should Know about iPad is gaining momentum in the educational sphere and might , in the near future, be integrated as a leading learning method. iPad is part of the gesture-based technology that is widely embraced by teens and which has pushed some school districts especially here in Canada and also in the States to start using the BYOD approach, for the costs of iPad and their apps is still relatively high. As a teacher who has not yet tried mobile technology in his teaching, you might be wondering where and how to start. What resources to use ?

An opinion on Yahoo's downfall Everyone would point their fingers at Mayer's mismanagement and inefficiency. But has one ever questioned oneself, whether Yahoo is on the right track or not as Google made an entry in the search engine market? The downfall of Yahoo has little to do with some failed acquisitions made by Mayer. Google, as a product in itself has been developed as a blank note pad, keeping in mind its product branding and functionality. The UI of Google synchronizes with the criteria required for a search engine.

App Inventor Get Started Follow these simple directions to build your first app! Tutorials App Factory Brilliants Apps Your content, fully branded Your logo, your icon, your colours Works with your blog, website, Twitter page, Flickr stream, YouTube channel, etc... Content updates automatically Make an App without Coding using Andromo App Maker for Android If you can point and click, you can make an Android app. No kidding. Make your own app right now. An Apple for the teacher: are iPads the future in class? I'm a self-confessed Apple fanatic so I was curious to see how iPads and iPods could be used successfully in a primary school. I was sure they would inspire and encourage the teachers I work with to take a chance and think outside their comfort zone and embrace new technology. But before our school jumped on the iPad bandwagon, I wanted to determine how these devices were going to offer a better learning experience compared to the laptops that we already had in our school.

The preferred Enterprise Web Application using Cloud Apps Wherever you look these days, technology and the web are making things easier for businesses and corporations to be better organized and more successful. One way that companies can work better together is through enterprise apps that connect people and companies in a more effective way than ever before. If you are a company or business that is searching for software or an online cloud application that can permit you to connect in a secure and effective manner, you may be wondering which web app is the most preferred enterprise cloud application today. While there are a number of web apps to choose from, and app development is continually changing to offer more benefits and functionality to users, the current leader in preferred cloud applications is Microsoft’s Office 365.

Calling All Learners and Teachers for Hour of Code 2015 Chances are high that computer-science literacy will be increasingly relevant for jobs of the future. Some theorists even suggest that the ability to read and write code is a fundamental 21st-century competency. Yet, according to an August 2015 Gallup survey, many students get little exposure to these concepts at school; opportunities are even more limited for low-income students. To address these realities, there are a variety of free resources that can help teachers of all grades and subjects give students exposure to computer science, as well as access to opportunities that develop the skills required to approach coding problems. This December 7-13, 2015, the Hour of Code campaign during Computer Science Education Week is one such opportunity. Code.org is hosting this event for a third year to engage students, teachers, parents, and others (ages five and up, and of any experience level) in fun ways to experiment with programming and game creation.

appsbar is an app maker and publisher that lets users create native Android apps, as well as HTML5 apps for iOS, Windows Phone and BlackBerry devices. It is backed by a team of app developers that makes sure you have the best app possible for your business. Creating an app on appsbar is a three-step process. First, select from one of 37 app types, such as general business, online business, restaurant, salon, gym, event planning and more. Next, build your app with features like menu choices, pages, multimedia, forms, social links and other content; you can also preview your app and make changes as you go. Lastly, submit your app for publishing and appsbar's developers will review and enhance your app to make sure it meets app store standards. appsbar also makes it easy for businesses to promote their apps. Once published, users can share their app directly from the appsbar app builder to social media platforms like Facebook, Twitter, Google+ and more. In addition to major app marketplaces like the Apple App Store and Google Play, apps can also be published at appsbar's free app marketplace appcatch. There, customers, prospective clients and partners can download your app as they would from any other app store. appsbar is completely free to both create and publish DIY apps. by tvobjektivs Jan 25