Tipping Etiquette Around the World 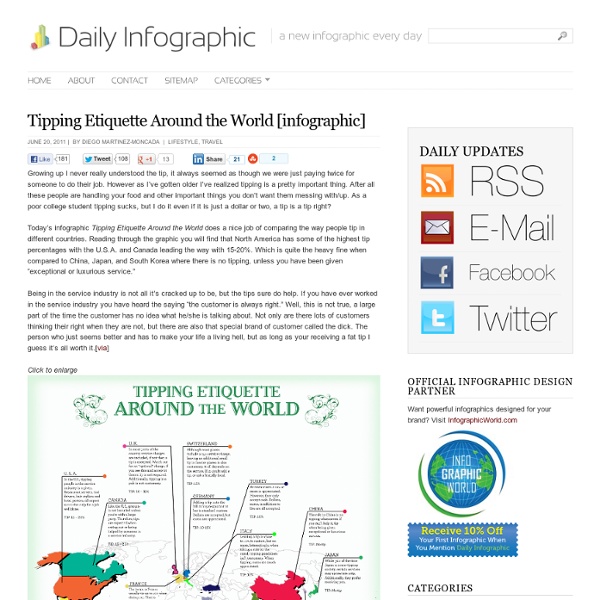 Growing up I never really understood the tip, it always seemed as though we were just paying twice for someone to do their job. However as I’ve gotten older I’ve realized tipping is a pretty important thing. After all these people are handling your food and other important things you don’t want them messing with/up. As a poor college student tipping sucks, but I do it even if it is just a dollar or two, a tip is a tip right? Today’s infographic Tipping Etiquette Around the World does a nice job of comparing the way people tip in different countries. Being in the service industry is not all it’s cracked up to be, but the tips sure do help. Click to enlarge Share This Infographic Get Free Infographics Delivered to your Inbox

What Shapes Our Language? Our language is constantly being shaped by a number of different influences, from social media and pop culture to other languages and even human error. Thanks to the ever-evolving Internet, new words enter our language almost daily. But beyond new words, technology has had a big impact on the ways in which we communicate, particularly with respect to how many words it takes us to get our point across. View the infographic below to learn more. (Click Image To Enlarge) Use This Infographic In Your Class We think that infographics are an awesome learning and teaching tool, so our creations will always be available for you to print out, use with your students and embed on your blog! Embed this image on your site <a href=" src=" <a href=" Blog</a> Warm-Up Activity Writing Challenge

Do You Know The Real Cost Of Social Media? These days if you’re not using social media to build your brand then you’re way behind the times. But many companies are fooled into thinking that social media marketing is free, or at least close to free. A new infographic published on Focus.com uncovers some of the costs of using social media for marketing, from staff costs to external fees, advertising and more, and discusses whether the ROI makes social media spending worth the cost. The infographic begins with a simple statement. According to the infographic, running a social media campaign is far from free. While it does look like Facebook fans spend more money on brands than non-fans, and that well-known brands did see an increase in traffic thanks to social media (most notably Old Spice with their Man Your Man Could Smell Like campaign which saw a 2700% increase in Twitter followers, an 800% increase in Facebook followers and a 300% increase in site traffic), was the money spent on these campaigns worth the return?

16 Facts About Sleep In order to start the week off right, I thought I would share an infographic very appropriate for a Monday, one entitled “16 Things You Didn’t Know About Sleep.” As I write this I think about how amazing sleep is and of those mornings when sleep is just too appealing to pass up. As we all know sleep is essential to life. It is one of the activities we will spend a large amount of our life engaged in. Sleeping works better than any medicine or home remedy, sleeping is the cure-all. One interesting tidbit that you may be unaware of which this infographic suggests is that color television has actually affected the way people dream. As a college student I now realize the importance of sleep. Share This Infographic Get Free Infographics Delivered to your Inbox

Cool Infographics - Blog Diagramly – A Handy Tool For Creating Quick Flowcharts The best thing about Diagramly is how accessible it is. You just click a URL, and you’re in. There’s no download, no account registration, and you don’t even need Flash to use it. It really couldn’t be simpler to get started. The worst thing about Diagramly (I’ll just get this out of the way right now) is the utter lack of documentation. Pretty easy to understand, right? Let’s take a look at the UI: I included Chrome’s address bar on purpose, so you’d see it really is a Web app. Here are just a few samples I picked at random: Why there is a Shield of David there, I have absolutely no idea. Once you’re done crafting your masterpiece, you can save it in one of a number of formats: Saving as an SVG is very handy if you have a desktop vector editing application (such as the free and open-source Inkscape). Should you use Diagramly for your multi-million dollar keynote?

What Are The Hardest Languages To Learn? [INFOGRAPHIC] Learning a new language can be difficult, but some languages can be trickier than others. For native English speakers, the difficulty level of a new language depends on a variety of factors. So which are the most difficult to learn? And which languages would you be able to master in under a year? (Click Image To Enlarge) Use This Infographic In Your Class We think that infographics are an awesome learning and teaching tool, so our creations will always be available for you to print out, use with your students and embed on your blog! Embed this image on your site <a href=" src=" <a href=" Blog</a> Warm-Up Activity Before handing out the infographic, discuss the following questions with your students: Are some languages harder to learn than others? Speaking & Critical Thinking Practice