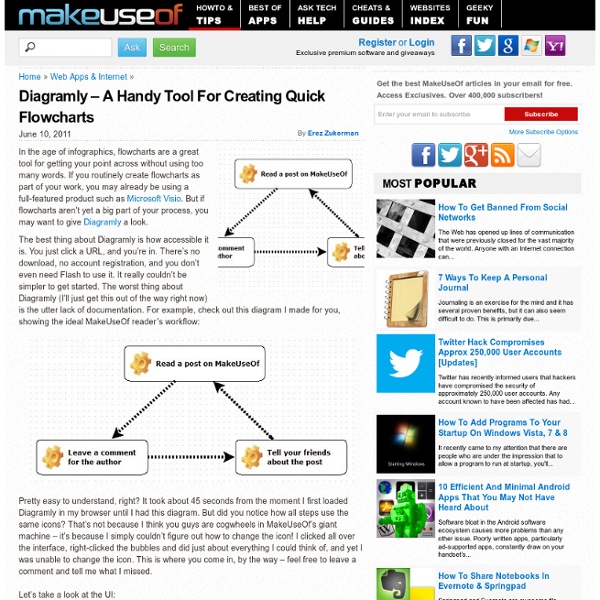 The best thing about Diagramly is how accessible it is. You just click a URL, and you’re in. There’s no download, no account registration, and you don’t even need Flash to use it. It really couldn’t be simpler to get started. Pretty easy to understand, right? Let’s take a look at the UI: I included Chrome’s address bar on purpose, so you’d see it really is a Web app. Here are just a few samples I picked at random: Why there is a Shield of David there, I have absolutely no idea. Once you’re done crafting your masterpiece, you can save it in one of a number of formats: Saving as an SVG is very handy if you have a desktop vector editing application (such as the free and open-source Inkscape). Should you use Diagramly for your multi-million dollar keynote?

Women in Business I’m sure you’ve been filling out a RFP, or some mundane company information form, when you see the section that asks if your company is a Women-Owned Business. My company is not run by women, however, I work with several companies that have women owners and key stakeholders. There are some advantages to being a women-owned business, but according to this infographic, women still only hold 3% of c-level positions. This is changing though. Click to enlarge Share This Infographic Get Free Infographics Delivered to your Inbox

pour appliquer By James M. Lang For two years I taught in a special program in which the same cohort of students took two consecutive courses with me: freshman composition in the fall and introduction to literature in the spring. In the composition courses, I worked hard to help students move beyond the standard strategies they had learned in high school for writing introductory paragraphs: Start with a broad statement about life ("Since the beginning of time, people have been fighting wars ...") and narrow down to a specific topic. In both years that I taught the two-course sequence, I was startled to see many students come back from winter break and—on their very first papers in the spring class—revert directly back to those tired strategies that I had worked so hard to help them unlearn in the fall. One such student came into my office early in the spring semester to show me a draft of her paper, and it included a lame reverse-pyramid (i.e., general to specific) introduction. D'oh! James M.

Tipping Etiquette Around the World Growing up I never really understood the tip, it always seemed as though we were just paying twice for someone to do their job. However as I’ve gotten older I’ve realized tipping is a pretty important thing. After all these people are handling your food and other important things you don’t want them messing with/up. As a poor college student tipping sucks, but I do it even if it is just a dollar or two, a tip is a tip right? Today’s infographic Tipping Etiquette Around the World does a nice job of comparing the way people tip in different countries. Being in the service industry is not all it’s cracked up to be, but the tips sure do help. Click to enlarge Share This Infographic Get Free Infographics Delivered to your Inbox

outils dessins et_peinture 1- Sketchfu This is a great free web tool that allows users to easily draw and create sketches and share them with others. It requires a sign up. 2- Sketchpad Sketchpad is a cool platform that you can use to make awesome drawings using text and a wide range of colours and patterns. 3- Comics This is another cool website that lets users draw comics and share them with others. 4- Quickmaps Quickmaps allows users to draw a quick map. 5- Tux Paint This is a free drawing program for children ages 3 to 12. 6- Drawing Game Maker This is a free drawing program for children with many nice options. 7- Livebrush Livebrush is a drawing application. 8- FlockDraw FlockDraw is a free to use online whiteboard based painting and drawing tool. 9- DoInk DoInk is a simple and friendly vector editor that lets users create flash-style animations. 10- Chogger Chogger is simple platform where you can use different tools to create awesome drawings. 11- Colour Lovers 12- Psyko Paint 13- Kerproof 14- Odosketch 15- Pencil

pour vidéos Do You Know The Real Cost Of Social Media? These days if you’re not using social media to build your brand then you’re way behind the times. But many companies are fooled into thinking that social media marketing is free, or at least close to free. A new infographic published on Focus.com uncovers some of the costs of using social media for marketing, from staff costs to external fees, advertising and more, and discusses whether the ROI makes social media spending worth the cost. The infographic begins with a simple statement. “With social media at the height of its popularity, advertisers and companies find it an easy and trendy means of expanding their marketing horizons. While many companies may be fooled by the free cost to open a social media account, many fail to consider the expenses that go into running a social media campaign. According to the infographic, running a social media campaign is far from free. Megan O’Neill is the resident web video enthusiast here at Social Times.

sur la créativité With the power to cross borders and languages, music serves as a compelling tool for unlocking creative potential. Creativity: Music to My Ears is a six week course designed to explore several factors that stimulate creativity in individuals, teams, and organizations. In each session we will focus on a different variable related to creativity, such as reframing problems, connecting and combining ideas, and challenging assumptions. All of the projects in this experiential course will deal with some aspect of music, including listening, creating, and sharing. No musical talent is required - just an interest in exploring the role that music plays in our lives. To deepen your understanding of music, throughout the course we will include video clips from experts in the music industry, including world-renowned Warner Music recording artists, Stanford music scholars, and industry executives who work to bring new and innovative musical expression to a global audience. « Less

Left Handed Facts 7 Stats 15% of people are left handed. I always thought this number was higher — and according to some of my left handed friends and family, also smarter? Well, according to this infographic, they are also more likely to become alcoholics — so I guess that’s a fair trade-off. If only 15% of people are left handed, think about the market that exists for left handed folks. Share This Infographic Get Free Infographics Delivered to your Inbox 16 Facts About Sleep In order to start the week off right, I thought I would share an infographic very appropriate for a Monday, one entitled “16 Things You Didn’t Know About Sleep.” As I write this I think about how amazing sleep is and of those mornings when sleep is just too appealing to pass up. As we all know sleep is essential to life. Sleeping works better than any medicine or home remedy, sleeping is the cure-all. One interesting tidbit that you may be unaware of which this infographic suggests is that color television has actually affected the way people dream. As a college student I now realize the importance of sleep. Share This Infographic Get Free Infographics Delivered to your Inbox

The Forex Market Explained Although the stock market gets all the publicity, trading currencies in the Forex market is a little different than trading a regular company’s stock. The Forex market trades currency and trading goes on for 24 hours during 5.5 days-a-week. These hours of operation mean that the Forex market trades in 1 day what Wall St. trades in a month. Right now the US dollar is not as strong as it used to be. How stable the country is and how well tourism is going are some deciding factors for the value of a country’s currency. The Forex market can be a bit simpler than Wall St because of a limited number of popularly traded currencies. Share This Infographic Get Free Infographics Delivered to your Inbox

10 Commonly Misunderstood Words My friends and I are self-professed grammar geeks. Upon hearing Alanis Morissette’s 90s hit “Ironic” on the radio, a worn out discussion usually breaks out: is she using the word “ironic” correctly? Yes, you can roll your eyes now. Today’s infographic supports my argument, but it also schools me against using “literally” as an emphatic “really,” and reminds me that politely chuckling does not a bemused person make. Share This Infographic Get Free Infographics Delivered to your Inbox UPS vs. FedEx: Surprising Stats Compared Every other day or so I get a shipment from some producer, publisher or as of lately, someone who wants Bit Rebels to review their gadgets. As you might have guessed, it’s either delivered by UPS or FedEx (occasionally even DHL). And if I am completely honest, I have never even bothered to see what other shipping companies are out there. I don’t even recall hearing any other company name when talking about shipping stuff. Maybe it’s because I want a master of a song or a letter to get to the recipient safely and on time. The commercials have certainly done their job making us choose between either of these two because I don’t think many of us would be able to list, for example, 5 other delivery brands without cheating and looking them up on the Internet. Alright, so who cares if there are other delivery brands out there. What if you were to look at the statistics and the data that these two multinational companies share? Via: [PackageFox]