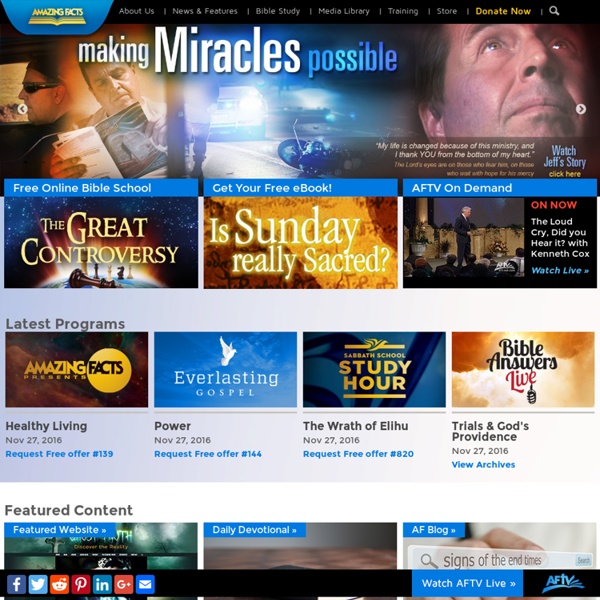 Prophetic Chart Mainly two divergent views of how to interprete critical Bible prophecies are being taught among the numerous Christian churches. These views are the ... Preterists (main stream Protestant churches), and the Futurist views (some Catholics). The third view, the Historicist View is mainly taught only by SdAs Which view should be retained? Amazing Facts > Media Library English Testimonies of Changed Lives Watch these inspirational stories that will encourage your faith in the Lord. Listen to others like you who found prayer for healing brokenness. These heart-touching testimonies will strengthen you and help you draw closer to God. Amazing Facts Presents The Ten Commandments - Thumbnail Links Below are choices to several web sites committed to revealing Bible truth on the Ten Commandments. They are in every respect dedicated to revealing the truth on what the Word of God teaches in regards to the Ten Commandments with the ultimate goal of expanding God's kingdom and achieving optimal relationships with our Creator and fellow man. They all vary slightly in how they present what the Bible has to say on the Ten Commandments in the respect that one gives straight Biblical facts while another shows also how the Ten Commandments relate to love and relationships. It is worthwhile to browse them all to see what you can glean from them. Select the following page for Ten Commandment Frequently Asked Questions. This page will be progressively updated to cover FAQ's on all the web sites provided here.

The Human Nature of Christ Dennis Priebe There are some subjects that people just don't like to talk about. Even when they are appropriate for discussion, they are carefully avoided. Often we are told that these subjects are not important to understand, that they really don't make any difference. Ed Reid He is an ordained minister and licensed attorney. He is certified as a teacher and counselor by Crown Financial Ministries. Ed is a graduate of Southern Adventist University and holds Master degrees from Andrews University (M. Div.) and Loma Linda University (M.P.H.) and a Doctor of Law degree (J.D.) from Georgia State University. He has also received a Graduate Certificate in Personal Financial Planning from City University.

The Prophecy Code - About The Speaker Why cloak Bible prophecies in Symbols? Luke 8 :10 And He said, "To you it has been given to know the mysteries of the kingdom of God, but to the rest it is given in parables, that 'Seeing they may not see, And hearing they may not understand.' Many of the apocalyptic prophecies were given while the prophets were in a hostile foreign land. One reason God cloaked the prophecies in symbols was to protect the messages. Download the Bible Symbols pdf here. TRUTH Of The Sons Of GOD "Sons of GOD" Let us begin by quoting the two passages in Genesis 6 concerning the "Sons of GOD": "That the sons of God saw the daughters of men that they [were] fair; and they took them wives of all which they chose." [Genesis 6:2] "There were giants in the earth in those days; and also after that, when the sons of God came in unto the daughters of men, and they bare [children] to them, the same [became] mighty men which [were] of old, men of renown."

The Official Site of the Seventh-Day Adventist World Church It's the world's best-selling book and yet it is generally the least read in any household. Written several thousand years ago, it could certainly seem irrelevant at first glance. The fact that it is a tome can also be an enormously daunting prospect, especially when you are time-poor. But the Bible isn't just your average novel. It's a love letter, storybook, history lesson, self-help guide and collection of inspirational quotes all rolled into one. The Prophecy Code - About The Speaker Many of the numbers in the Bible have deeper prophetic or spiritual significance. Both in the Old and New Testaments, numbers reveal hidden concepts and meanings that commonly escape the casual reader. And throughout history, men with great minds, like Augustine, Isaac Newton, and Leonardo Di Vinci, showed more than just a passing curiosity regarding the importance of biblical numbers. Once more, Jesus said, “The very hairs of your head are numbered” (Matthew 10:30).

Is It Essential or Nonessential Dennis Priebe We have experienced much discussion and debate on the subject of the humanity of Christ. Too much, in the minds of many. Prophetic 1260,1290,1335 day/years of Daniel 12 This system places itself between the people and Christ's heavenly ministry so people look to this earthly system for forgiveness and entrance to salvation, not to Christ. But notice something more: In both Daniel 11:31 and Daniel 8:12 we read that this power receives an army by which he removes the TRUE daily and sets it aside, rejects it, so that he might set up the abomination. Was there a time before the beginning of the 1260 years when the papacy came into possession of an army which it used to set up it's authority over spiritual matters, which marks the beginning of the 1290 day/years?

The Search for the True Church The Search Is there a true church in the world today? And if so, how can it be identified? Of all the religious questions facing the modern truth-seeker, this is certainly the most demanding and also the most frustrating. Conflicting voices from every quarter declare that they have the answer.

Clearly one of the best resources for Biblical education with our Community of Faith. by williamellerbe Oct 25