10 of My Favorite Infographics 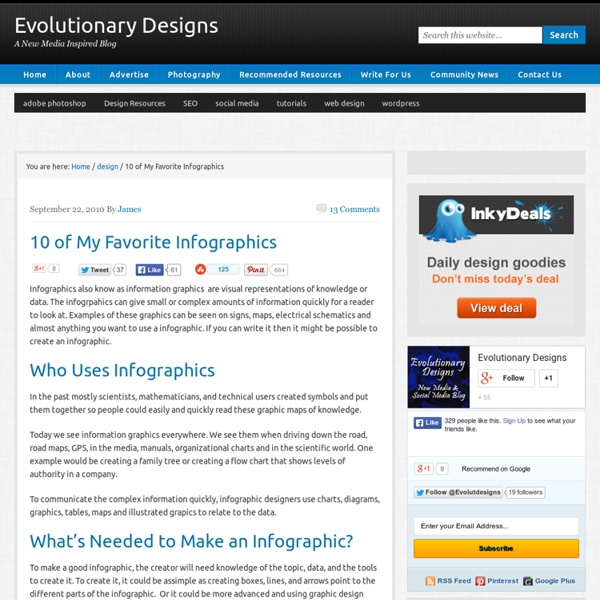 Infographics also know as information graphics are visual representations of knowledge or data. The infogrpahics can give small or complex amounts of information quickly for a reader to look at. Examples of these graphics can be seen on signs, maps, electrical schematics and almost anything you want to use a infographic. If you can write it then it might be possible to create an infographic. In the past mostly scientists, mathematicians, and technical users created symbols and put them together so people could easily and quickly read these graphic maps of knowledge. Today we see information graphics everywhere. To communicate the complex information quickly, infographic designers use charts, diagrams, graphics, tables, maps and illustrated grapics to relate to the data. What’s Needed to Make an Infographic? To make a good infographic, the creator will need knowledge of the topic, data, and the tools to create it. Are Infographics the Best Way To Represent Data? My Favorite Infographics 2.

40 Useful and Creative Infographics Six Revisions Menu Main Categories CSS HTML JavaScript Web Design WordPress Web Development Design Inspiration UX Design UI Design Freebies Tutorials Tools Links About Contact Advertise RSS Twitter Facebook 40 Useful and Creative Infographics By Jacob Gube Information graphics (or infographics) are graphical depictions of data and information. In this collection, you’ll find forty beautiful and educational infographics, displaying the uncommon spectacle of "art meets science". 1. The proportion of ingredients for popular coffee drinks and their pronunciation keys. 2. This infographic showcases the history of the Swine Flu, starting from 1976. 3. 4. 5. The top breweries and beers in the U.S. 6. 7. 389 Years Ago A rundown of the historic events in African-American culture. 8. 9. 10. 11. An illustrated guide at how the Global Warming phenomenon works. 13. A packed visual piece on tobacco chemicals and tobacco trade worldwide. 14. 15. 16. A graphical representation of consumer spending across the globe. 17.

The 7 ½ Steps to Successful Infographics You know when you’ve been doing something for a long time and it gets ingrained? For me, that’s infographics. I’ve created a lot of chartage over the last 20 years Take a look: Here’s me when I started at the New York Times, where I was a graphics editor. I worked there for 15 years, on all the news desks, with the investigative team, and ran the biz section graphics desk. The middle i.d. is my stint at Fortune Magazine, where I was the Infographics director and got to work with the awesome folks at CNNMoney.com (I’m fading!). Anyway, when Nishant from MIX asked me to write about what I do, it was kind of arresting, like the time that Montana patrolman intercepted my husband doing 94 on a long stretch of highway. So here I am, pulling over. 1. Where does one procure an idea? Usually they’re found in the shower. Don’t wake up with an idea? Our stories are driven by the news, so our graphics are framed by ‘what’s new’ and sometimes ‘what’s different’ and hopefully, ‘what’s relevant.’ 2. 3.

25 Inspiring Infographics on Twitter Since its inception in 2006, Twitter has seen millions of tweets from everyone about everything. There are over 177 million tweets sent a day on average. Aren’t you curious to know about some unknown facts on twitter? In this post we have featured 25 inspiring infographics that tells you lesser known facts on twitter. 1. Via www.pamorama.net 2. 3. Via Viral Media Solutions 4. 5. 6. 7. 8. Source 9. Source 10. Source 11. Source 12. Source 12. Source

Infographics Bin HIV DNA PCR Testing HIV is a virus that has caused quite a stir around the world in the last few decades. This virus affects the human body in harsh ways, reducing a person’s immune system capabilities severely and preventing the body from defending against other illnesses. Over time, HIV can lead to AIDS (Acquired Immune Deficiency Syndrome), which leads to very extreme damage to the body’s immune system. The Anatomy Of An Infographic: 5 Steps To Create A Powerful Visual Information is very powerful but for the most bit it is bland and unimaginative. Infographics channel information in a visually pleasing, instantly understandable manner, making it not only powerful, but extremely beautiful. Once used predominantly to make maps more approachable, scientific charts less daunting and as key learning tools for children, inforgraphics have now permeated all aspects of the modern world. I designed a couple of infographics back in college, the need arising especially around the time Soccer World Cup fever spiked. It was a fun process representing the different groups, predicting winners in each group at each stage and creating a mock pairing of teams that would clash all the way leading upto the finals. I was a devout Argentinian supporter at the time. Infographics can appear daunting to some with the sheer amount of data they present, but designed in the right manner and step by step, they can actually be one of the most fun things you will ever create. 1. 2.

10 Tips for (journalists) Designing Infographics This article was originally published on “Digital Newsgathering”, a class blog for Journalism 226 at San Francisco State University, Instructor: Staci Baird. I wrote this post as a guest author, and with permission I am republishing it here. Assuming you’re not working for a media corporation with huge graphics and statistics departments at your disposal, you may want to create some infographics for your own articles. With today’s flood of information, infographics allow readers to quickly digest and understand complex data. A good infographic will not only inform readers, but will also create interest and convince people to read your article similar to how good headlines and photos attract readers. Here are 10 tips for designing better infographics (click the images to go to their original sites): 1) Be Concise: Design your infographic to convey one idea really well. This example is an infographic poster I created about the caffeine content in drinks. The Caffeine Poster, by Randy Krum

10 Infographic Geared Toward Designers News designers and web developers know that a good informational graphic is more than just flashy images or statistics slapped on a three dimensional bar graph. The best infographics should attract an audience’s attention with simple, relevant images, and hold their attention with a compelling story told in visual shorthand. Strong infographics have concise, accurate headlines that let readers know the significance of the story at a glance. At the core of a truly captivating infographic is the grain of truth it conveys. For this reason, designers in particular should enjoy and learn something about their craft from these 10 clever design-focused infographics. "How would you like your graphic design?" Designers already know they spend a lot of time dealing with media, but this retro-looking infographic by fastcompany.com breaks it down by the numbers.