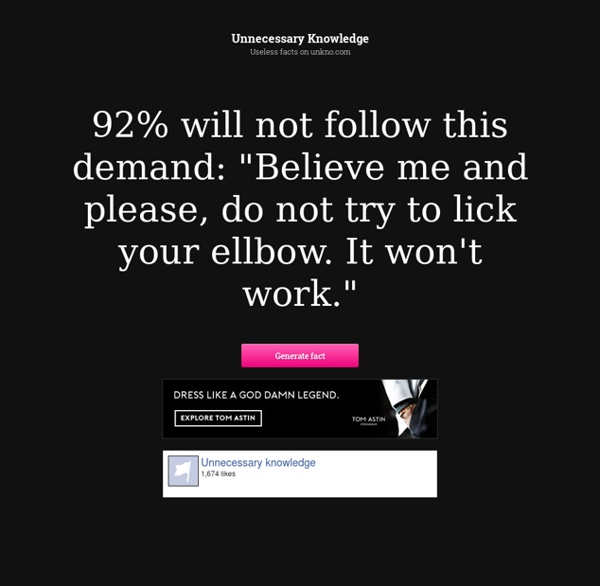 Giving Identity to Hundreds of Unique Faces Have you ever felt lost in the crowd, a nameless face wandering in the masses? Well, Brazilian artist Guilherme Kramer decided to eliminate those feelings of loneliness by giving each nameless face that he saw proper recognition. Across the course of one year, Kramer was inspired to draw the faces that he saw in his daily life onto a giant blank wall of an office in São Paulo, Brazil. The piece, entitled We See People In the Crowd, grew face-by-face until the wall was completely covered.

Technology Laws Murphy's technology laws Logic is a systematic method of coming to the wrong conclusion with confidence. Whenever a system becomes completely defined, some damn fool discovers something which either abolishes the system or expands it beyond recognition. Technology is dominated by those who manage what they do not understand. If builders built buildings the way programmers wrote programs, then the first woodpecker that came along would destroy civilization.

Neil Gaiman - The official UK publisher's website - American Gods Days before his release from prison, Shadows wife, Laura, dies in a mysterious car crash. Numbly, he makes his way back home. On the plane, he encounters the enigmatic Mr Wednesday, who claims to be a refugee from a distant war, a former god and the king of America. 15 Awesome Inspirational Quotes by Celebrities and Famous People Let these words of greatminds inspire you and help you to achieve your goals and live a fulfilling life. (Image Source) (Image Source) (Image Source) (Image Source)

Riusuke Fukahori Paints Three-Dimensional Goldfish Embedded in Layers of Resin First: watch the video. Japanese artist Riusuke Fukahori paints three-dimensional goldfish using a complex process of poured resin. The fish are painted meticulously, layer by layer, the sandwiched slices revealing slightly more about each creature, similar to the function of a 3D printer. I really enjoy the rich depth of the pieces and the optical illusion aspect, it’s such an odd process that results in something that’s both a painting and sculptural. Wonderful. Create Music Beats - The online music factory JamStudio for 2021! Download the Windows App or Mac App to keep using JamStudio! DO IT NOW! This app will work after Flash is removed from browsers in 2021! Windows AppMac App

Coping with stupid clients : Quotes, Comments & Remarks Total Stupid Comments : 8274 exaspirate | posted 04-05-2010 | Number of Votes: 48 | Current Rating: 4.65 A reversal of the usual customer confusion when entering characters dictated over the telephone. Some years ago, a hardware manufacturer (Acer, if I recall) introduced new adapter cards before third-party software suppliers, including my employers, were ready. In most cases, existing software did not work with the new cards, failing to auto-detect id. addresses and so on. While we worked frantically to catch up, a customer telephoned and said that, like it or not, their card had to be made to work that evening, as a month-end financial report had to be run. Mercifully, the customer might not have been computer-savvy but at least followed instructions without complaining or wilfully throwing his own interpretations into things.

An art and design blog. Obariyon. 2013. Stoneware, antique hooks, glaze. 17 x 46 x 30″ Washington-based artist Beth Cavener Stichter sculpts human-sized animals from clay and other materials in both dramatically overt and subtly ambigous displays of emotion. Hung from ropes or pinned to walls, the anthropomorphic sculptures are infused with juxtapositions that depict the extremes of both human emotion and animalistic behavior: predator and prey, love and hate, fear and peace.

Tribute To Graffiti: 50 Beautiful Graffiti Artworks Advertisement Street culture and graffiti are well-known for being provocative, appealing, bold and uncompromising. Originally used by gangs to mark their territory in some urban area, graffitis have now become a rich medium for unrestricted expression of ideas and statements. Banksy Goes To The Olympics And Challenges London Authorities [4 High Quality Photos] In an effort to clean up London’s graffiti city authorities have threatened to power wash any Olympics-related graffiti that shows up during the games. Sensing a growing controversy secretive artist Banksy challenged the authorities the only way he knows how, by daring the city to carry out it’s threat on two new piece he created and posted on his website. Banksy is one of London’s most well-known artists and his creations sell for hundreds of thousands of dollars so it will be interesting to see what the city decides to do.

25 Places to Get Free PSD Files for Designers As a professional designer or developer, it is vital to discover locations from where you can obtain useful resources for your client projects. One of the most necessary resources for a visual artist is PSD files. PSD (Photoshop Document) are files that are used to stores images with support for imaging options. These files can be customized anytime and are a useful resource for designers.