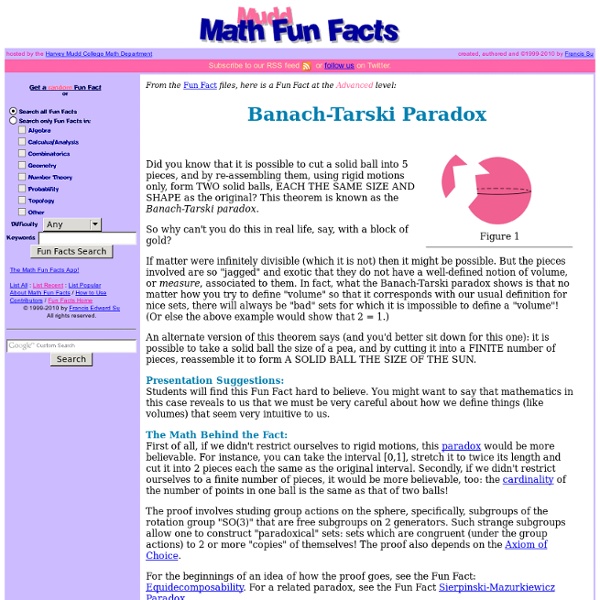 Did you know that it is possible to cut a solid ball into 5 pieces, and by re-assembling them, using rigid motions only, form TWO solid balls, EACH THE SAME SIZE AND SHAPE as the original? This theorem is known as the Banach-Tarski paradox. So why can't you do this in real life, say, with a block of gold? If matter were infinitely divisible (which it is not) then it might be possible. But the pieces involved are so "jagged" and exotic that they do not have a well-defined notion of volume, or measure, associated to them. An alternate version of this theorem says (and you'd better sit down for this one): it is possible to take a solid ball the size of a pea, and by cutting it into a FINITE number of pieces, reassemble it to form A SOLID BALL THE SIZE OF THE SUN. Presentation Suggestions: Students will find this Fun Fact hard to believe. The Math Behind the Fact: First of all, if we didn't restrict ourselves to rigid motions, this paradox would be more believable.

Khan Academy StumbleUpon - Wikipedia, the free encyclop StumbleUpon is a discovery engine (a form of web search engine) that finds and recommends web content to its users. Its features allow users to discover and rate Web pages, photos and videos that are personalized to their tastes and interests using peer-sourcing and social-networking principles. StumbleUpon acquired 5by in 2013 which its video discovery product.[3] History[edit] StumbleUpon was founded in November 2002[8] by Garrett Camp, Geoff Smith, Justin LaFrance and Eric Boyd during Garrett's time in post-graduate school in Calgary, Canada. The popularity of the software attracted Silicon Valley investor Brad O'Neill to take notice of the company and assist with a move to San Francisco, as well as bringing in subsequent fund-raising totaling $1.2 million from other angel investors including Ram Shriram (Google), Mitch Kapor (Mozilla Foundation), First Round Capital and Ron Conway. Service details[edit] StumbleVideo[edit] StumbleThru[edit] Su.pr[edit] Advertising[edit] Growth[edit]

10 Psychological Experiments That Went Horribly Wrong Psychology as we know it is a relatively young science, but since its inception it has helped us to gain a greater understanding of ourselves and our interactions with the world. Many psychological experiments have been valid and ethical, allowing researchers to make new treatments and therapies available, and giving other insights into our motivations and actions. Sadly, others have ended up backfiring horribly — ruining lives and shaming the profession. Here are ten psychological experiments that spiraled out of control. 10. Stanford Prison Experiment Prisoners and guards In 1971, social psychologist Philip Zimbardo set out to interrogate the ways in which people conform to social roles, using a group of male college students to take part in a two-week-long experiment in which they would live as prisoners and guards in a mock prison. 9. Wendell Johnson, of the University of Iowa, who was behind the study Theodore Kaczynski, the Unabomber, also seen top 7. 6. 5. 4. 3. 2. 1. David Reimer

Integral Table Mario and Michelle Layman's Guide to the Banach-Tarski Paradox Preliminaries First of all, let's nail down what exactly we're talking about so that we're all on the same page. First and foremost, we're talking about a mathematical sphere, not a physical sphere, although I'd like to use an analogy with physical spheres to describe one possible way to intuit the Banach-Tarski Paradox. S = {(x,y,z) | x2+y2+z2 <= 1 } One important difference between S and a real, physical sphere is that S is infinitely divisible. 2Or, to be precise, c points, where c is the cardinality of the continuum. In fact, if we assume that spheres are not infinitely divisible, then the Banach-Tarski paradox doesn't apply, because each of the "pieces" in the paradox is so infinitely complex that they are not "measurable" (in human language, they do not have a well-defined volume; it is impossible to measure their volume). Now let's move on to the paradox itself. The Banach-Tarski Paradox How can this ever be intuitive??! Now, we have successfully built two (physical!) Bingo! Epilogue

Take It to the Limit In middle school my friends and I enjoyed chewing on the classic conundrums. What happens when an irresistible force meets an immovable object? Easy — they both explode. But one puzzle bothered us: if you keep moving halfway to the wall, will you ever get there? Questions like this have always caused headaches. But Archimedes, the greatest mathematician of antiquity, realized the power of the infinite. In the coming weeks we’ll delve into the great ideas at the heart of calculus. If you’re a careful thinker, you might be worried about something already. Imagine using a photocopier to reduce an image of a circle by, say, 50 percent. Of course, this doesn’t tell us how big pi is. Before turning to Archimedes’s brilliant solution, we should mention one other place where pi appears in connection with circles. Here A is the area, π is the Greek letter pi, and r is the radius of the circle, defined as half the diameter. Yes, it is. What makes the problem difficult is that circles are round.

Online Mathematics Textbooks Professor Jim Herod and I have written Multivariable Calculus ,a book which we and a few others have used here at Georgia Tech for two years. We have also proposed that this be the first calculus course in the curriculum here, but that is another story.... Although it is still in print, Calculus,by Gilbert Strang is made available through MIT's OpenCourseWare electronic publishing initiative. Here is one that has also been used here at Georgia Tech. Linear Methods of Applied Mathematics, by Evans Harrell and James Herod. Yet another one produced at Georgia Tech is Linear Algebra, Infinite Dimensions, and Maple, by James Herod.