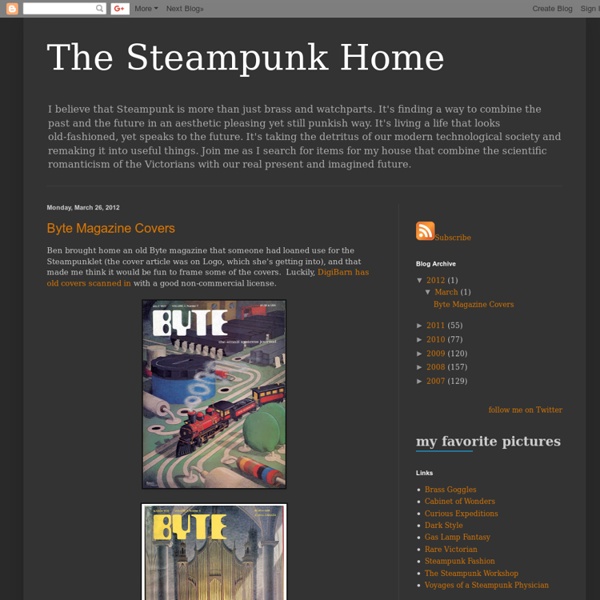 I saw this artwork by photographer Amanda Weil, in House Beautiful and I thought the idea of a transparent or translucent image printed on glass was intriguing. Old daguerreotypes were printed on glass, so the idea could be adapted for some very steampunk images. Weil makes furniture and screens as well as wall art, but for the DIY photographer, I'd look into Fracture. You can get an 18 inch diagonal print on glass for $35. According to their FAQ, "You'll be able to select "No Mount" for just the opaque printed glass or "Transparent" for the printed glass without any white background." I think that, paired with a sepia or black and white toned photo, would make for a impressive wall.

Tutorials Geekery, Girliness, & Goofing Off Search Bar HTML Pages Crafts August 2010 Still Image from the PlayStation Home Steampunk Sim, known as Nova Venezia One of the reasons I would argue that there is a strong Steampunk presence in virtual worlds is not only for the ability to design Steampunk environs but also for convenience of interaction. The ability for a person to visit such a location easily from their own domicile plays a circumstance in the virtual experience. Second Life has been, to my knowledge, on the forefront of virtual world Steampunk locales, with such dedicated Steampunk destinations as New Babbage, Caledon, and Steeltopia, among many other locales. Production from the Steampunker's Ball in PlayStation Home (Mostly people standing around, but still a peek into a new Steampunk world)

"Jack the Ripper" was Winston Churchill's Father According to John Hamer, the Masonic ritual murder of four prostitutes was carried out by Winston Churchill's father, Lord Randolph Spencer Churchill, 1849-1895 (left.) The prostitutes were blackmailing the royal family. "Churchill was not only the 'brains' behind the entire operation, but he was also personally responsible for the cutting of Masonic emblems and symbols into the bodies of the victims, whilst William Gull's surgeon's hands performed the organ removals."

How to Fry Marbles and Make Crackle Bead Jewelry FireNFusion is a Wisconsin based glass artisan who has both an Etsy store and her own website, Dichroic Jewelry and More. She posted a really cool tutorial on her blog how to make a fried marble pendant necklace. Thanks Nikki for updating this link! The marbles aren't actually fried in oil but baked in a really hot oven and then rapidly cooled in iced water. Steampunk Leather Top Hat Tutorial I have received several requests for a tutorial on making my steampunk leather top hat, shown above, and so, here it is. The first drawing shows the three pattern pieces (not to scale). The wave on the bottom of the crown is what gives the brim its distinctive curve. The pattern below is the one that I used to make my top hat.

Brass Goggles:The lighter side of Steampunk Posted by proteus on December 23rd,2013 Two things I love in one photo: [via Brian Kesinger’s Tea Girls] Posted by proteus on October 17th,2013 A Steampunk Badminton tournament sounds like a fantastic idea. Posted by proteus on October 11th,2013 RodinAerodynamics.org - Marko Rodin - Rodin Coil -- Introduction -- Hopefully this will enable people to understand "why" there is only "one" truth and how we can all move forward in learning more about the "nature" of what that one truth is and why no single person or group of people can be the "owner" of the one truth and that literally everyone has a piece of the "enlightening" puzzle which is like a riddle, wrapped in a mystery, inside an enigma. -- Substance -- I just figured out a great example of how two seemingly very different points of view can be demonstrated to have not only similarity but symmetricality to the point that they are saying or expressing almost, if not totally, the same exact thing! :o) Perhaps think in terms of a dialogue facilitator (or "introducer") who is in the presence of two people who are arguing violently that "their" symbol represents THE truth.

Blog « Rayela Art [caption id="attachment_1750" align="aligncenter" width="594"] Me with Tor, soon after we found him, February 2012, Tucson, Arizona.[/caption] Almost exactly one year ago, I went with Abdul to Tucson for the Gem and Mineral Show. He drove a big ...