The Greatest Steampunk Festival in the World! 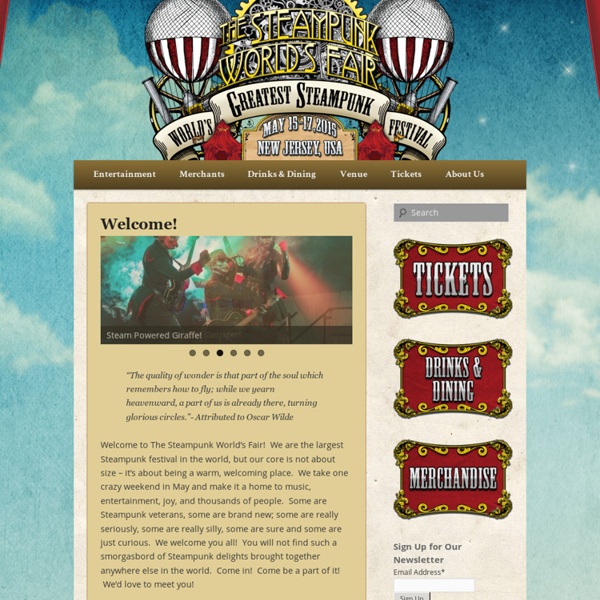 The Steampunk Workshop | Technology & Romance - Fashion, Style, & Science Online : Maker Faire: M.T. Pockets Traveling Midway of Curiosities and Delights One of the group installations coming to this year’s Maker Faire Bay Area, taking place on May 22nd and 23rd at the San Mateo Fairgrounds, is M.T. Pockets Traveling Midway of Curiosities and Delights. A nostalgic throw-back to carnivals of old, this exhibit is a self-contained window into yesteryear, when the carnival would roll into town and create a magical environment. We conversed with Marcus Guillard of One Hat One Hand Productions for some insight, and it’s clear this crew walks the walk. 1. Tell us about the project(s) you’re bringing to Maker Faire. M.T. M.T. M.T. Solvo Fervens Cani: The human-powered target-shooting booth.The Great Airship Race: Take your aim, fill up your basket, and watch your airship fly the skies.Bucksome Betty’s: Enter our burlesque tent, and watch these sexy ladies dance. Are you in the need for a little life advice? M.T. M.T. Our very own carnies come dressed and ready to work. 2. 3. It’s a long story, but a simple one to tell. 4. 5. 6. 7. Goli Mohammadi

Tickets | It is our extraordinary pleasure to invite you to take your place within Occultus. We offer an evening wherein dreams become, not realities, but a trickier thing – larger, darker, sweeter figments of the mind, and we give you an opportunity to step inside them. Enter the nether spaces of Occultus, and let yourself be taken away, for the evening, by goblin minds and strange souls. We invite the curious, the playful, the phantasmic; we invite you, whether you come to watch, or to throw yourself into the action! We invite you to be surprised, amused, disconcerted, and delighted. We invite you to become one of us. Your most exclusive invitation awaits. Purchase your tickets today – because Occultus, like all things in the realm between idea and reality, may vanish tomorrow…. UPDATE: For all VIP orders placed after July 6th – the invitation to the seances are since sold out. UPDATE: As of today, July 10th – VIP pre-orders are now closed.

NPHC Greek Information - Black/African American Cultural Center The National Pan-Hellenic Council was founded in 1930 to serve as a governing body to the nine nationally recognized historically black fraternities and sororities. Its purpose is to foster cooperative actions of its members in dealing with matters of mutual concern. To this end, the NPHC promotes the well-being of its affiliate fraternities and sororities, facilitates the establishment and development of local councils of the NPHC, and provides leadership training for its constituents. The council's purpose is to promote unity and expose members to the "service for life" philosophy and foster leadership development and scholarship among the “Divine Nine” chapters which belong to the NPHC. Furthermore, the National Pan-Hellenic Council provides a forum for participation and interaction among the members of affiliate organizations and the organizations themselves. It provides for a stronger unified voice and a stronger unified body. Alpha Phi Alpha Fraternity, Inc. (1906) Contact: N/A

Nova Albion Steampunk Exhibition New York Comic Con - the biggest and most exciting popular culture convention on the East Coast! - New York Comic Con | October 10 - 13, 2013 | Javits Center How to Make a Steampunk Utility Belt | Susan Dennard Steampunk utility belt: the place to carry your Tools of Awesome–or to just hang onto some spare change. Whatevs. No matter what you choose to store, you’re gonna look STEAMPUNK-TASTIC wearing it. Now this part of the costume is easy. Like so easy I feel guilty devoting an entire post to it…so I made some silly graphics for you. To make your steampunk utility belt, you only need a few things, all of which can be found at your local thrift store. 1. 2. 3. 4. Mission Accomplished: Steampunk Utility Belt Complete! Here are some links to other great belt ideas (all courtesy of the fantastic steampunk resource, steampuk fashion): Gail Carriger’s insta-belt (yeah, the author of Soulless!) Another DIY creation (from Finland!) A detailed step-by-step guide for the well-equiped steampunker: You tell me: Would you ever make a steampunk utility belt? Leviathan and A Great and Terrible Beauty ♦ (both are open internationally)

Steampunk&#039;s subculture revealed Jake Von Slatt's steampunk persona is of a gentleman scientist tinkering on his clockwork contraptions, hoping to one day present his discoveries to the Royal Academy in London. By day Linux systems administrator Sean Slattery, in his other life as the top-hatted "Hieronymus Isambard 'Jake' Von Slatt," Slattery applies Neo-Victorian modifications to cars, buses and computers in his Steampunk Workshop outside Boston. Steampunk originated in the 1990s to describe science fiction that was an offshoot of the cyberpunk genre, but has since gained a real-world footing in fashion and design that evokes the Victorian era. The elegant creations of self-styled "steampunk contraptors" such as Von Slatt have a growing network of fans and have been getting the press to prove it. Von Slatt, Richard "Dr. The beginnings "While steampunk is very strongly informed by history, it approaches that history from a set of modern sensibilities. Mainstreaming Steampunk So how mainstream is steampunk?