Technology - Steampunk - How to Make Instructables 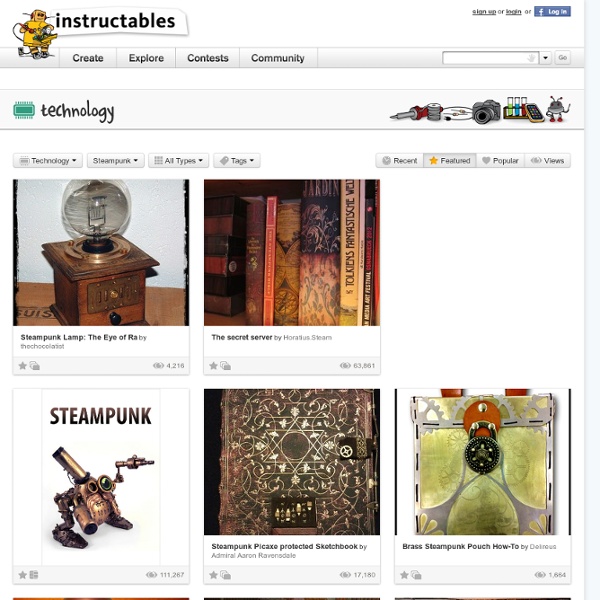 fairy 8 Useful Web Tools You Would Not Want To Miss Online web tools are great because they can save your time and you do not need leave your browser. As our daily lives evolve into online sphere, having right web tools on your hand can certainly be convenient. In this post you will find some useful web apps that are not only useful, but also easy to use. 1. Convert Files Easily convert different file formats. 2. Are you a power searcher? 3. Simply create thumbnails in different sizes right from your browser. 4. Have you ever wondered if you could record your screen right from your computer without any software? 6. Another handy tool for project mangers, designers and developers. 7. If you maintain multiple websites and wanted show feeds between you websites, Cyclur will get the job done with knowing too much coding. 8. Filpping Typical is a useful online utility for web designer to preview a text in different fonts. DevCheatSheet A collection all kind of cheat sheets for different markup and scripting languages on the web.

Copper Plating & Etching Altoids Tins UPDATE: There's some great information on this page and it's comments, but I've recently published a far more comprehensive article here: Etching Tins with Salt Water and Electricity With this project I wanted to try a number of new things: Magazine pages as cheap toner transfer mediaCopper electroplatingEtching Altoid tins with a salt water solution The copper plating met with mixed success, but the other two methods resulted in some nice pieces. Note: blue vitriol and muriatic acid are archaic names for copper sulfate and hydrochloric acid. Magazine pages for toner transfer: While looking for information on transferring toner using a fuser assembly from an old laser printer I ran across several websites where people suggested using glossy magazine pages for transferring printed circuit board images to a copper substrate. Preparing the Altoids tins turned out to be harder then I predicted. Next we: Copper Plating Altoids Tins: From the picture below, this appears to work. Foom!

10 Predictions for Web Development in 2011 As a class, developers have had a fantastic year in 2010. We've made headlines, grabbed the limelight, been vilified and glorified beyond all reason and gotten paid pretty nicely along the way. And the bubble of consumer web apps just continues to swell, so there are no signs (yet) that 2011 will bring anything short of grandeur for the web and mobile development communities. Looking ahead to what the coming year might hold, there are a few sure bets and a few speculations we'd like to offer. Some are, as noted, almost certainly bound to come true. With that in mind, here are 10 things we think the world of hacking will hold in 2011. 1. Even the most brainless of "social media gurus" could tell you this one. Now, as tablets begin to creep into the market, we're having to craft new experiences for those, as well. Almost every developer worth his or her salt will have to become increasingly adept at developing for the myriad form factors set to dominate the gadget market in 2011. 2. 3. 4.

Steampunk Finger Stylus I use a touchpad GPS regularly at work and lost the pen stylus a long time ago; it was inconvenient anyway trying to hold the stylus, GPS unit, and drive an ATV at the same time. So I made some finger stylussss?Stylii? from old water jug handles for work. For this Instructable I added some extra parts for fun Steampunk styling. Step 1: Cut Handle Out of Water Jug This is simple, just cut out a small section from the handle of the jug. Step 2: Plain Stylus Finish Briefly hold the tip of the stylus in a flame to round it and keep it from being scratchy. Step 3: Paint and Hot Glue Extra Stuff Getting a sense of Steampunk style takes a little intuition and internet browsing for ideas.

Miss Betsy's Steampunk Monitor If you visit the google library in these days, the librarian will find plenty of articles and depictions of so called "Steampunk Monitors". In my imagination though, I envisioned the creation of a device that could show static but also moving pictures generated by means of computation and modulation of waves generated by my ingenious new invention.... (Any resemblance to devices used in "City of Lost Children" is purely coincidental). I also wanted to add "loudspeakers" (E. The device will be able to reproduce sound and static/moving pictures and will be powered by another invention of mine , based on the works of my fellow researchers Nikola Tesla, using hyper-condensed steam applied to a turbine by the same name, Count Alessandro Giuseppe Antonio Anastasio Volta and Michail Osipovich Dolivo-Dobrovolsky, able to produce alternating current in the amount of 110 Volts. The glass storing containers and part of this generator will be visible atop the base cabinet.

What is Steampunk? | Steampunk.com This is a good question that is difficult to answer. To me, Steampunk has always been first and foremost a literary genre, or least a subgenre of science fiction and fantasy that includes social or technological aspects of the 19th century (the steam) usually with some deconstruction of, reimagining of, or rebellion against parts of it (the punk). Unfortunately, it is a poorly defined subgenre, with plenty of disagreement about what is and is not included. For example, steampunk stories may: Take place in the Victorian era but include advanced machines based on 19th century technology (e.g. The Difference Engine by William Gibson and Bruce Sterling);Include the supernatural as well (e.g. “It’s sort of Victorian-industrial, but with more whimsy and fewer orphans.”- Caitlin Kittredge There are probably plenty of other combinations I’ve forgotten, but that’s steampunk as a genre in a nutshell. And it isn’t just written fiction anymore. But steampunk has become a lot more.

A Visit to a Steampunked Home If you dropped by my house you'd probably be disappointed. Because (with the exception of my office, which is more post-apocalytic than anything else) it's simply not very steampunk. I do have plans, but none have come to fruition. Bruce and Melanie Rosenbaum started ModVic (Modern Victorian) Home Restoration in June 2007 and have now moved onto steampunk Home Design. Bruce's home is a Craftsman style Victorian built in 1901. We'll start the tour in Bruce's kitchen with a lovely Victorian heater restored by David Erickson, a local craftsman and restorer of antique stoves who's workshop is just down the street from my own. Bruce designed and built the fire-back and hearth to compliment the stove and installed the back-lit stained glass windows to brighten the entire kitchen. The hearth is cultured stone done by Brendan Mostecki of Cultured Masonry. The center of the kitchen is dominated by an antique printer's bench topped with engineered quartz stone.

Marvels of Science and Steampunk by *JonHodgson on deviantART Steampunk: 20 Core Titles By John Klima Featuring H.G. Wells, Neal Barrett & Cherie Priest By John Klima — Library Journal, 03/04/2010 Steampunk is everywhere, from movies like Sherlock Holmes and Howl’s Moving Castle to the Victoria’s Secret Fashion Show and an art exhibition at the Museum of the History of Science in Oxford, England. A subgenre of science fiction, it typically (but not always) employs a Victorian setting where steam power and advanced technologies like computers coexist and often features themes, such as secret societies, found in mystery novels. A little background: The subgenre has its origins in the 1980s with writers such as Tim Powers, James Blaylock, and K.W. Here are ten classic steampunk works and ten more recent titles for a well-rounded collection. The Classics | Recent Works Barrett, Neal, Jr. Blaylock, James P. Di Filippo, Paul. Gibson, William & Bruce Sterling. 29461-3. pap. $7.99. Jeter, K.W. Moorcock, Michael. Out of print. Powers, Tim. Steampunk. 9. pap. $14.95. Swanwick, Michael.