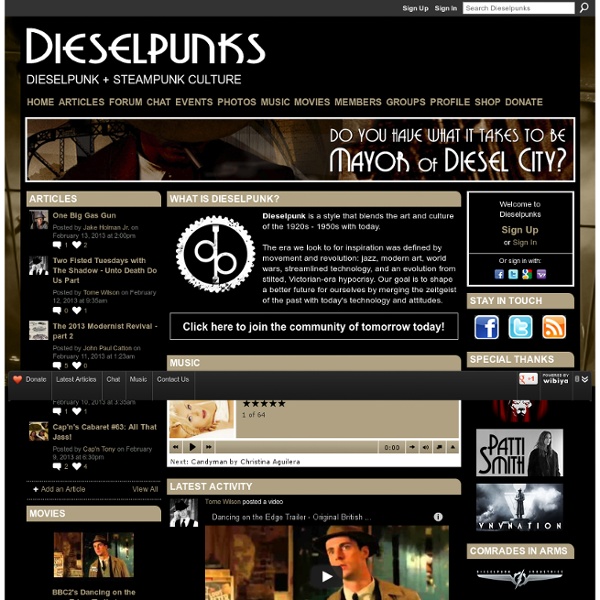 Dieselpunk: for the war effort! « The Flying Fortress TFF is dedicated exclusively to dieselpunk, a subgenre of retro-futurism styled on the 1930s and 1940s. That sounds good, but what exactly is dieselpunk? Fortunately, I won’t be the first to tackle this question: Mr. Brass Goggles: The lighter side of Steampunk Posted by proteus on December 23rd,2013 Two things I love in one photo: [via Brian Kesinger’s Tea Girls] Posted by proteus on October 17th,2013 A Steampunk Badminton tournament sounds like a fantastic idea. Dieselpunk: Love Affair with a Machine "QUANTUM SHOT" #509Link, by A. Abrams Who would've thought that rusty pipes can spawn a cultural movement? But they did... After cyberpunk, steampunk was the logical development, then bio-punk, clock-punk, nano-punk, squid-punk... and now dieselpunk (no relation to Vin Diesel, or is there?)

7 Free Wooden Gear Clock Plans for You Eccentric, Masochist Woodworkers Ever since I had the pleasure of seeing Keith Chamber’s wooden gear clocks in person, I’ve been on the look out for more all wood clocks. See Wooden Gear Clocks by Keith Chambers >> I think wooden clocks are one of those dividing lines in woodworking… To have the aspiration to make a clock, entirely from wood, puts you in your own unique category. One well-known seller of wooden clock plans, Clayton Boyer, pitches his most-difficult plans like this: “Selling plans for the clocks on this page goes against my basic philosophy of trying to spread joy in the world through creative woodworking. However, I have come to the conclusion that I should not stand in the way of a woodworker’s desire for additional frustration in his/her life when they obviously want it so badly.” He won’t sell plans from his “Masochist’s Corner” unless you’ve built one of his simpler clocks first… and sent him photographic PROOF that you completed it. I love it.

Industria Mechanika » Dieselpunk I’ve been mentioning on our Facebook page that we’ve got many new products in development and that I would soon be showing them off. Well, wait no longer as the announcement time is here! This isn’t everything we’ve got coming up, but will give you a taste of what to expect. Share This Image » First up, go to Facebook, Twitter, friends, etc and please share this Promo Image. This will help us spread the word about our upcoming (and existing) products and keep bringing these amazing pieces to life. DIY Steampunk Gauges If you're building steampunk props for cosplay, gauges are a must-have. Unfortunately, vintage gauges (which look the most authentic) can be both hard to find and pretty darn expensive once you do track them down. So, John and I decided to make our own. Here's the secret:

On the Road Again with Diesel Punk Welcome back to another weekly challenge at Our Creative Corner. This week's hostess is Holly Keane and Holly wants us to tie our artwork into a song title. Mine is "On the Road Again" by Willlie Neslon. So what do you think of this Diesel Punk look? Lindsay Kitson – Dieselpunk Author Since I did my first solo last week, I’ve built up about 5 hours of solo flight now. Previous to that, my instructor mentioned several times when she took me up in more questionable weather, that I’ll need to start thinking about what my personal limits will be – what I’m confident I can handle with regards to winds and crosswinds, and what I might not be able to land the plane safely in. Post-solo, having flown a bunch on my own, I’ve noticed it really does change the way I think about that. The safety net is gone, but not only that. For the last ten years, I’ve been working in a call centre environment, and that’s an environment where, despite what management will try to push you to believe, the completion of whatever task you perform is dependent on the performance of so many other individuals, that it’s very difficult to excel, and sometimes indeed, to even complete the task assigned at all. In the air though, it’s different.

Steampunk Leather Top Hat Tutorial I have received several requests for a tutorial on making my steampunk leather top hat, shown above, and so, here it is. The first drawing shows the three pattern pieces (not to scale). The wave on the bottom of the crown is what gives the brim its distinctive curve. Are you ready for International Dieselpunk Day? No? It's a good job you've got months to prepare, then, because the first one takes place on November 12 2012. The date was chosen because while there's some flexibility in what dieselpunk is, the most widely-accepted date for the start of the Diesel Era is the end of the First World War, November 11 1918. If you're familiar with steampunk, which is essentially Victorian science fiction, dieselpunk is similar but later, and there's a bit more discussion of politics and globalisation among dieselpunks as it (roughly) covers the era between the two world wars, and you can't avoid political discussions when you're looking at that part of history. But what I really like about dieselpunk is that it is essentially a smorgasbord of many of my favourite things: vintage swing and modern swing, noir films and movies like Raiders of the Lost Ark or The Rocketeer, art deco and pulps, and the big WHAT IFs of alternate history.

Tutorials Geekery, Girliness, & Goofing Off Search Bar HTML Pages Diesel Punk. Meh. I really don't know how I feel about diesel punk. I suppose all on it's own I like it. It's the future that steampunk becomes, followed by raygun gothic. Free Patterns Menu: Period Clothing Patterns and Cutting Diagrams - The Ladies Treasury of Costume and Fashion Period Clothing Patterns and Cutting Diagrams IMPORTANT: Notes On Using Our Patterns These patterns are reproduced from original period patterns and from cutting diagrams found in English, French and American publications of the 19th and early 20th centuries. Those copied from full-sized patterns were scanned in at 1/2, 1/4 or 1/8 of the original size as indicated on each piece.