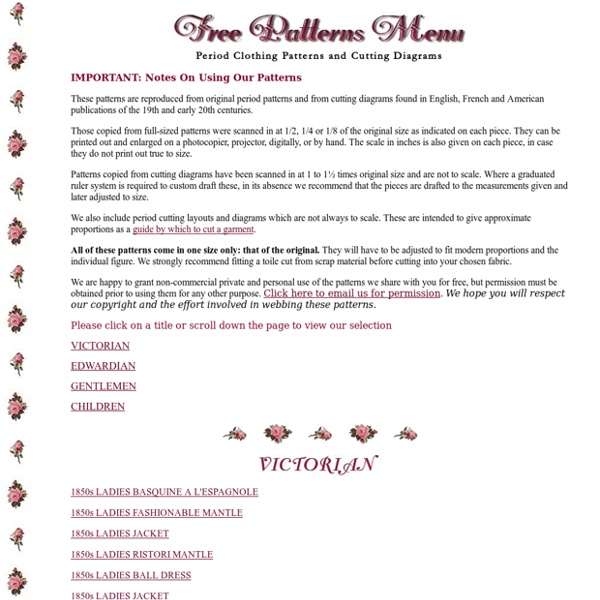 Period Clothing Patterns and Cutting Diagrams IMPORTANT: Notes On Using Our Patterns These patterns are reproduced from original period patterns and from cutting diagrams found in English, French and American publications of the 19th and early 20th centuries. Those copied from full-sized patterns were scanned in at 1/2, 1/4 or 1/8 of the original size as indicated on each piece. They can be printed out and enlarged on a photocopier, projector, digitally, or by hand. The scale in inches is also given on each piece, in case they do not print out true to size. Patterns copied from cutting diagrams have been scanned in at 1 to 1½ times original size and are not to scale. We also include period cutting layouts and diagrams which are not always to scale. All of these patterns come in one size only: that of the original. Please click on a title or scroll down the page to view our selection

How to Make Steampunk Jewelry Wikipedia defines Steampunk as “a subgenre of fantasy and speculative fiction that came into prominence in the 1980s and early 1990s. The term denotes works set in an era or world where steam power is still widely used-usually the 19th century, and often set in Victorian era England-but with prominent elements of either science fiction or fantasy, such as fictional technological inventions like those found in the works of H. G. Wells and Jules Verne, or real technological developments like the computer occurring at an earlier date.

mmmcrafts: twelve days ornaments! YOUR RESOURCE PAGE FOR MY ORIGINAL TWELVE DAYS ORNAMENT SERIES!On the first day of Christmas my true love sent to meeeeee... ornament patterns! Yay!#twelvedaysornaments The twelfth day of Christmas My true love sent to me Moccasins 101: How to make one-piece moccasins in Tutorial Section Forum Moccasin Tutorial Part 5: Sewing the Moccasins For instructions on how to sew your moccasins together refer to the Whipstitching Tutorial at Sole and Top: With right sides together, whipstitch from the big toe down the short side to the centre fold line. Make your stitches about 1/8 inch apart and about 1/8 inch from the edge. Neat, evenly spaced stitches will show in your finished work and are worth the effort.

Tutorials Geekery, Girliness, & Goofing Off Search Bar HTML Pages Crafts Home Subscribe to: Posts (Atom) untitled One of the elements that I've discovered is hardest to come by when making kanzashi are bira bira, or the little metal flutters that dangle under some kanzashi pieces. I'm an impatient sort of girl, and didn't want to order some from Japan and then have to wait for them to make their way over here, so I decided to hit the hardware store and take a stab at making them myself. Here's what you'll need to do the same: 20 gauge jewelry wire Large (4 - 5mm) jump rings 26 gauge aluminum sheet metal ($5 at the hardware store) Tin snips A ruler or yardstick Needlenose pliers A nail A hammer A pen A pencil Alrighty, let's get started. First, you want to build your frame for the bira bira. Take your jewelry wire and cut off a length of it, about 10" - a foot.

dinosaur heels Talk about walking with dinosaurs! Kick it really (really) old school with a pair of Dinosaur Heels that look just as good touring Jurassic Park as they do strolling down Park Avenue. These prehistoric pump upgrades are fully functional, the standard heel has been replaced with a steel bolt welded to the sole shank, with hollow dinosaur toys to cover up the hardware. It looks like these tiny terrors are holding you up, or maybe chasing you down as you are running away trying to escape Isla Nubla. After the internet went crazy a month ago for these dinosaur shoes I knew I wanted to recreate them. If you read about those shoes while they were trending then you probably know that these shoes were reposted all over the place. Steampunk Jewelry Made Simple May 19, 2011 by suzannelazear Today we welcome Brenda Sue of B’sue Boutiques who’s jewelry supply store not only has everything you need to make neat Steampunk jewelry, but she also has loads of instructional videos for people like me who love to make things, but in all honesty can’t craft their way out of a cardboard box. STEAMPUNK JEWELRY MADE SIMPLE: Breaking It Down to Cogs and Gears

How to Make Regency Diadems - Mistress of Disguise Greetings, gentle readers! Are you ready to follow me down the rabbit hole of shiny objects? It's not for the timid - these tiaras bite. I'll let you know now, they're vicious little creatures. Dwarven Battle Bonnet pattern by Sally Pointer/ Wicked Woollens *NEW! A lot of people are asking me for the modifiations with cables, bobbles, ‘spectacle helm’ and a ribbed beard. This has now been written up as a new version ‘Dwarven Battle Bonnet 2’ which is also top down construction and desn’t necessarily need fulling. Steampunk Leather Top Hat Tutorial I have received several requests for a tutorial on making my steampunk leather top hat, shown above, and so, here it is. The first drawing shows the three pattern pieces (not to scale). The wave on the bottom of the crown is what gives the brim its distinctive curve. The pattern below is the one that I used to make my top hat. For a size large, the width of the crown (from side to side) should measure 23.8". You can print it out and enlarge it to get it to lifesize.