A Visit to a Steampunked Home 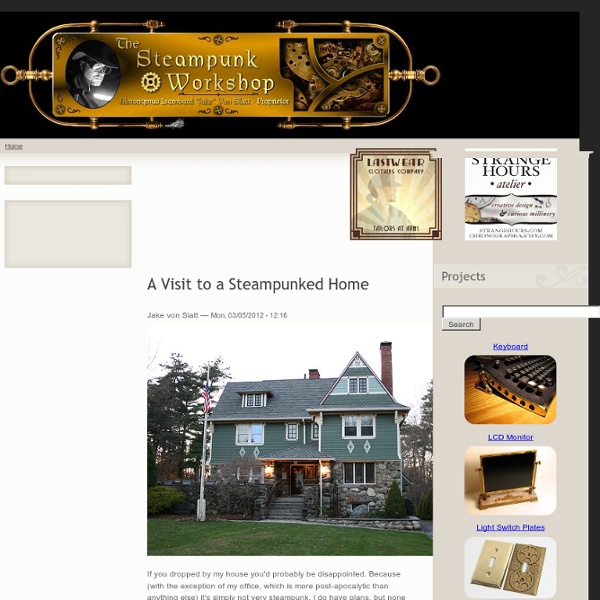 If you dropped by my house you'd probably be disappointed. Because (with the exception of my office, which is more post-apocalytic than anything else) it's simply not very steampunk. I do have plans, but none have come to fruition. Bruce and Melanie Rosenbaum started ModVic (Modern Victorian) Home Restoration in June 2007 and have now moved onto steampunk Home Design. Bruce's home is a Craftsman style Victorian built in 1901. We'll start the tour in Bruce's kitchen with a lovely Victorian heater restored by David Erickson, a local craftsman and restorer of antique stoves who's workshop is just down the street from my own. Bruce designed and built the fire-back and hearth to compliment the stove and installed the back-lit stained glass windows to brighten the entire kitchen. The hearth is cultured stone done by Brendan Mostecki of Cultured Masonry. The center of the kitchen is dominated by an antique printer's bench topped with engineered quartz stone. Related:  steampunk

Victorian Organ Command Desk & Steampunk Home Tour You'll recall I recently visited the Steampunk home of Bruce and Melanie Rosenbaum. During that visit Bruce showed me a partially finished project that I decided really needed a story of it's own when it was completed This is the "Victorian Organ Command Desk" that Bruce commissioned. It's made from bits and pieces of Victorian detritus that Bruce had collected including the carcass of a 19th century pump organ. All of the major components are in fact authentic Victorian antiques, period reproductions, or salvaged items. It took 6 months to build using four different crafts persons to design the desk, restore and modify the antiques, and install the computer systems. The gorgeous clock face on the 'dashboard' is flanked by 6 LCD digital picture frame displays that featured rotating images of Bruce's friends and family. The desktop included an iPhone doc and a document scanner hidden under a leather lined panel beneath the keyboard. Carved and be-geared oaken busts flank the console.

What is Steampunk? | Steampunk.com This is a good question that is difficult to answer. To me, Steampunk has always been first and foremost a literary genre, or least a subgenre of science fiction and fantasy that includes social or technological aspects of the 19th century (the steam) usually with some deconstruction of, reimagining of, or rebellion against parts of it (the punk). Unfortunately, it is a poorly defined subgenre, with plenty of disagreement about what is and is not included. For example, steampunk stories may: Take place in the Victorian era but include advanced machines based on 19th century technology (e.g. The Difference Engine by William Gibson and Bruce Sterling);Include the supernatural as well (e.g. “It’s sort of Victorian-industrial, but with more whimsy and fewer orphans.”- Caitlin Kittredge There are probably plenty of other combinations I’ve forgotten, but that’s steampunk as a genre in a nutshell. And it isn’t just written fiction anymore. But steampunk has become a lot more.

Steampunk Games & Game Art | Design Stuff Daily | Design and Inspiration Blog Steampunk Games & Game Art Wednesday, July 21, 2010 13:27 For today’s entry, with Steampunk week taking off and providing mechanical and steampowered inspiration to anyone who finds themselves here, we will be looking at something a bit different. Steampunk is becoming more and more popular, but it’s nothing new. We’ll be taking a look at some steampunk inspired computer games from the late 80′s to present day! (And even some steampunk takes on classics!). Final Fantasy Series Torchlight Syberia Steel Empire Rise of Nations: Rise of Legends Nostalgia Neo Steam: The Shattered Continent The Misadventures of P.B. Darkwatch Fallout Bioshock Arcanum: Of Steamworks and Magick Obscura Penny Arcade: On The Rain Slick Precipice Of Darkness Borderlands If you enjoyed this post, please help us out by clicking one or more of these shiny buttons!

Steampunk We have written about a couple of Steampunk gadgets before. These were the Steampunk Nerf Maverick Gun and a Steampunk Furnace Mouse. Both look cool and this next one is no exception. I have to admit that it’s not something I would ever wear to a party, but it is still quite cool to see. For those who are not familiar with what Steampunk is, it is the process of building a modern day gadget type object with a Victorian look and normally made or brass, wood and other materials commonly used in that era. <a href =" >polls</a> &#8211; <a href =" >Take Our Poll</a> Via: Flickr Miss Betsy's Steampunk Monitor If you visit the google library in these days, the librarian will find plenty of articles and depictions of so called "Steampunk Monitors". In my imagination though, I envisioned the creation of a device that could show static but also moving pictures generated by means of computation and modulation of waves generated by my ingenious new invention.... (Any resemblance to devices used in "City of Lost Children" is purely coincidental). I also wanted to add "loudspeakers" (E. The device will be able to reproduce sound and static/moving pictures and will be powered by another invention of mine , based on the works of my fellow researchers Nikola Tesla, using hyper-condensed steam applied to a turbine by the same name, Count Alessandro Giuseppe Antonio Anastasio Volta and Michail Osipovich Dolivo-Dobrovolsky, able to produce alternating current in the amount of 110 Volts. The glass storing containers and part of this generator will be visible atop the base cabinet.

Da Vinci Automata Unklian Steampunk Mouse After Finding a Steampunk Motorcycle I was intrigued.A Google search of "Steampunk" Found a world of Victorian styled modern technology.Inspired by a Steampunk mouse, I decided to build my own. Not a copy but a completely new design.I bought a very cheap optical mouse and set about *carefully dismantling* destroying it. After chopping round the circuit board mounting pegs, I marked round it to slot it into some 1/4" mahogany sheet. The button microswitches were removed to be used in a more suitable place and also the blue L.E.D. This will be replaced with an orange one. A housing was made for the scroll wheel and the circuit board.The scroll wheel looked very plasticy. A front deck was made from mahogany and the sides were lowered to make the scroll wheel more usable. After literally hours (OK, a long time) measuring, A location was found for the microswitches. The rear of the mouse will be home to a more "Steampunk" kind of innards. These were left a little long to be trimmed later.

steampunk on Etsy, a global handmade and vintage marketplace.